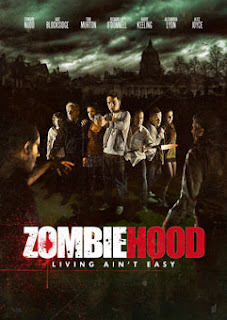 The title of Zombie Hood, which was produced in and around Nottingham, is a reference to Robin Hood although there’s no real connection apart from some people taking refuge in some woodland and a few shots of the Robin Hood statue outside Nottingham Castle in the film’s climactic scene. On screen the two words are run together, suggesting Zombiehood might be etymologically similar to Noel Clarke drama Kidulthood (or Steve Martin comedy Parenthood!). I suspect most US viewers will think it means ‘zombies in the hood’.

There’s nothing obviously startling or innovative about Zombie Hood - at heart it’s a pretty generic zombie movie - but on closer inspection there are a number of interesting elements which are rarely seen in this over-milked subgenre. More importantly, everything that Zombie Hood does, even the stuff that we have seen done before, is done well. This is a solid, gripping, skilfully crafted zombie feature and an impressive debut from writer-director Steve Best.

Shot over two years, the film feels very fragmented, but that works in its favour. Time and again we are presented with new characters, some of whom swiftly meet gruesome ends, a few of whom become central characters and eventually meet up with others. We have no way of knowing, as each scene opens, whether we are watching an important part of the main narrative or a self-contained vignette which serves only to reinforce the randomness and helplessness of the immediate post-apocalypse. And that actually works brilliantly in conveying the sense of chaos that would ensue from a zombie outbreak. (Some of these short, unrelated scenes were apparently filmed by other people and submitted as part of a competition.) 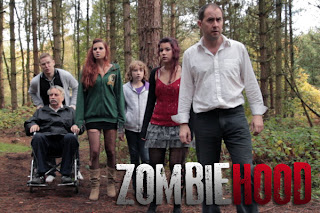 The entire movie takes place over only a few days, beginning at a pub gig where local indie rockers In Isolation are performing. Likeable Rik (Richard Lee O’Donnell, who played a paparazzo in Kill Keith) is chatting up Candi (Jade Blocksidge) when it all kicks off and the two escape the city together, later re-encountering Candi’s mate Kelly (Alexandra Lyon). One of the things I really, really liked about Zombie Hood is that most of the characters are working class. The protagonists of most zombie films - heck, most horror films generally - tend to be thoroughly middle class, perhaps representing the social groups from which film students are traditionally drawn. When we do get any working class representations, they tend to be Danny Dyer-style Cockney thugs. Few and far between are the horror movies where we meet, and are expected to root for, ordinary British working class folks.

Class conflict provides character conflict in Zombie Hood as middle class Dermott (voice-over artist Edward Nudd) becomes the de facto leader of the small group of survivors but runs up against Sam (Tom Murton), a swaggering cocky youth who thinks he’s a big man because he has got a gun. Rounding out the party are old geezer Bill (Harry Keeling) whose legs are not what they once were and who spends part of the film, somewhat impractically, in a wheelchair. Plus ten-year-old(-ish) Melanie (Alice Joyce), whose initial meet-up with Bill raised some unintended chuckles from the audience that the characters really don’t deserve. 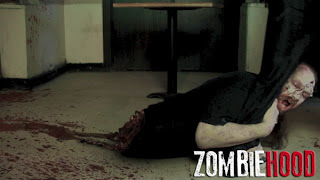 There‘s not a great deal to the story: debates about whether the city or the countryside is safer, a raid on a pub for supplies, and a number of escapes (or not) from ravenous zombie hordes. Alongside class representation and constantly wrong-footing the audience with narrative dead-ends, the other clever aspect of Zombie Hood is the innovative way it addresses the great schism of the zombie subgenre. Fast or slow? Steve Best has his cake and eats it by using both types of zombies (without explanation) and having the characters discuss them: the slow ones present little threat, except to Bill (“They’re still faster than me.”) or en masse, but the fast ones are a danger that requires weaponry.

The 200 or so zombies on view were trained up by Steven Uden and Adelle Overton of Zed Events, who organise live action zombie events. Overton (who was an exec producer on Slasher House) also has a role as another survivor, Ella. Jayne Hyman (Devil’s Tower, Wasteland) was in charge of the zombie make-up team (and also co-producer), with visual effects by Steve Askey. Cinematographer was David Wayman, director of various shorts including a Tomb Raider fanfilm (in which Alexandra Lyon played Lara Croft). Quite a number of the cast and crew have worked on Wayman’s various pictures as well as some shorts by my old mate David Lilley (The Hand, Vespers, The Wailing Well etc). Token name value, if you can call it that, is provided by some bloke who was in Big Brother.

The whole thing is held together by Best’s direction (and editing) which turn what could have been a jumble of scenes and a collection of unsympathetic characters into an impressive, enjoyable, thrilling zombie film with plenty of action, plenty of gore, a smidgeon of humour and a satisfyingly nihilistic ambience.

I’m going to type that again because I’ve just thought of it and I like the way it sounds: a satisfyingly nihilistic ambience. Oh yes.