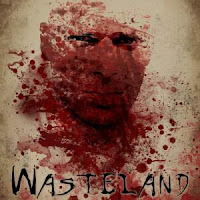 Wasteland is, for the most part, a fine modern zombie picture: bleak, depressing and - what was that phrase I coined in the Zombie Hood review? - satisfyingly nihilistic. Here’s a film for everyone who watched Before Dawn and thought well, that was good but perhaps just a little too effervescent.

Sadly, Wasteland doesn’t quite have the courage of its convictions and gains confidence in the third act, giving the audience a degree of hope which this audience member (and maybe it’s just me) really doesn’t want in a film like this. When I watch a depressing zombie movie, I expect to leave the cinema depressed. That’s how I know I enjoyed it. Still, this is an impressively made, well acted and well photographed British zombie feature and comes thoroughly recommended.

Shameer Seepersand (aka Shameer Madarbakus) carries the film with a superb performance as Scott, a survivor of the zombie apocalypse who lives alone in a little stone shed in the middle of the Peak District. He has a supply of tins of beans and a short-wave radio but his biggest problem is water. It hasn’t rained for weeks and the nearby rivers are polluted because of the numerous dead bodies floating in them. 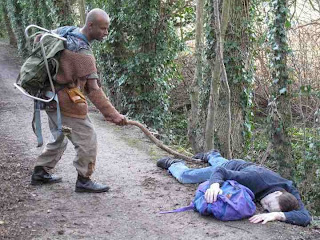 For the first half of the film, Seepersand basically is the movie, his solitary life filmed in an interior set in director Tom Wadlow’s garage. For much of the production there was no-one around except Seepersand, Wadlow and cinematographer Chris Newman, isolated from the world in their own little environment. We see Scott’s hopeless life as he survives from day to day. Nowhere to go, nothing to do except forage for any remaining foodstuffs and fight off occasional zombie attacks. He’s not living, he’s just not dying. It’s the sort of solitary post-apocalyptic existence that we have seen in (or at least, at the start of) films like The Eschatrilogy and The Vanguard.

Breaking up this one-man show are flashbacks to Scott’s earlier life: meeting, wooing and settling down with his girlfriend Beth (Jessica Messenger). He also has radio contact with a couple somewhere, George (Gavin Harrison) and Barbara, but even that ends badly.

Scott is waiting. Waiting for Beth to come back. Determined to not move from his shed until the love of his life returns. I’m not going to spoil the film for you by revealing whether or not she ever turns up. What I will say is that in the third act Scott leaves his little shed and sets out across country, eventually encountering another couple: Max (Mark Drake) and teenager Lolli (Rachel Benson). While some sort of development was needed at this point, having spent so long getting to know Scott I felt that Max and Lolli were sketchier characters. Their motivations seem unclear and their actions don’t seem to have any clear narrative justification. I’m simply not sure why they did the things they did.

Yes, we finally get character conflict (which regular readers will know I believe lies at the heart of any film) but it’s difficult to see quite how or why this conflict originates or what it hopes to achieve. The film builds to a climax which is almost action-packed by comparison with the languorous pace of the first two acts, and finishes on a notion of hope which sort of undercuts the bleakness of the overall movie. 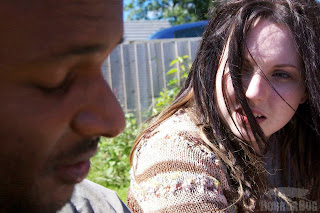 It’s an okay third act, but it sits incongruously with the first two. I’m sure I was not the only audience member looking for things to get worse and worse until eventually everyone we cared about was dead, and I feel slightly short-changed by the change in tone.

That said, this is still a good zombie film. Shot for the now-traditional tuppence-ha’penny of these things with fine zombie make-up designed by Deborah Bennett and applied by Jane Hyman (Devil’s Tower, Dave Lilley’s The Wailing Well) among others. Sophie Black pulled triple duties as production designer, art director and costume designer while Dave S Walker (Entity) provided the score and Joe Parcell contributed often unnoticeable visual effects (including, for example, digitally creating parts of Scott’s shed when there wasn’t room in Wadlow’s garage to get the required angle). Scriptwriter Tommy Draper previously collaborated with Tom Wadlow on short comedy Shelf-Stackers and also contributed to Neil Oseman’s time travel fantasy Stop/Eject. Wadlow himself has a bunch of shorts under his belt going back to 2007 and here makes the transition to feature length adroitly and confidently with highly laudable results.

Shameeer Seepersand has had small roles in EastEnders, Casualty and Calendar Girls but this is his first feature lead and first horror role; it should get him serious attention. Jessica Messenger on the other hand already has quite a horror-heavy CV, mostly through Philip Gardiner stuff like One Hour to Die, Dark Watchers: The Women in Black and Awesome Killer Audition (which has now apparently been retitled One Hour to Die 2!). She is also in Devil’s Tower (another Derbyshire frightflick) and Anglo-American virus horror Psoro, a film which looks like it has disappeared completely. Mark Drake was in Ali Djarar’s non-MR James-ian A Warning to the Curious, yet another missing title in the British Horror Revival. Among the undead on screen are Dean Sills (Dark Walkers: Rise of the 4th Reich, Exorcist Chronicles, Blaze of Gory, The Eschatrilogy), Sandy Kate Slade (also in Dead Walkers and Exorcist Chronicles), Rich Creedy (Cockneys vs Zombies) and John Shelton, host/creator of 48-minute anthology Halloween Creep Tales. 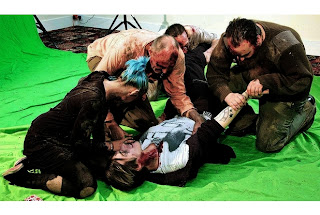 I really enjoyed Wasteland. It’s not quite the film I wanted it to be but then I didn’t write or direct it. Nevertheless, as a reviewer, it’s my job to make these observations. However, it’s also my job to recommend this to anyone looking for a solid, well-crafted contemporary British zombie flick. In a subgenre where standards are often so low, Wasteland stands above much of the rest, not least thanks to a cracking central performance by young Mr Seepersand.