Call of the Hunter 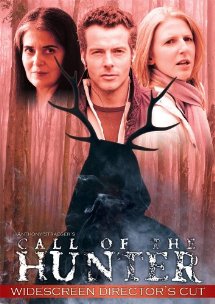 Call of the Hunter is one of the new breed of British horror movies, in that it’s a perfectly good (except for, well, see below) feature-length film which has received a DVD release on both sides of the Atlantic (albeit self-released by the film-maker over here) and yet absolutely no-one has ever heard of it. Apart from British Horror Revival obsessives like me. And I could count the number of BHR obsessives on the fingers of one address book. That’s why Urban Terrors has sold so many copies...

There was a time, not so long ago, when just the existence of such a thing would have generated interest and discussion. Magazines like Shivers and Samhain would have written about the film because, well, there was damn all else to write about. But now, when British horror features are routinely released at an average rate of one a week like some sort of cinematic Gatling gun, things like this pass everyone by. Look, there’s – oop, missed it. Never mind, here comes another one.

So, four years on, with Call of the Hunter available through various VOD sites for a princely 76p, which is cheaper than buying a secondhand DVD down the market (and saves the trouble of having to carry it to the charity shop afterwards), let’s take a look at the little fellow.

It starts out pretty good. A film crew are shooting a documentary about English folklore icon Herne the Hunter (you may remember him from such TV series as Robin of Sherwood and The Box of Delights). So we have funky-haired director Tamsin (Sarah Paul: Nickelodeon's House of Anubis), German camera-woman Natasha/Nat/Tash (Katrin Riedel-Kelly), Brummie sound-man Dan (Michael Instone: Lycanthropy), sensible production assistant Elaine (Julia Curle: The Spell) and fruity-voiced actorrrrr Ralph (Don McCorkindale: Dr Sleep, Grange Hill and two early Carry Ons) who claims to have had an actual encounter with Herne back in the early 1960s. 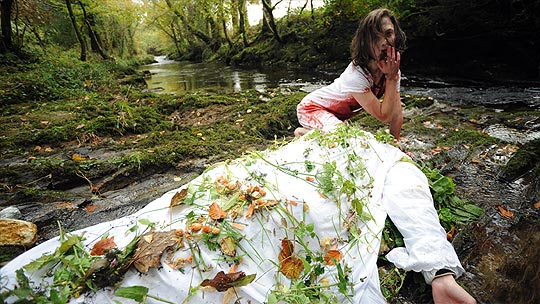 Ralph and his sister Caroline were with a friend who disappeared after foolishly blowing a casually discarded hunting horn. More recently, Caroline had become an item with Yank goth Gabriella (Angelique Fernandez, who was in Polanski’s The Ghostwriter) who looks like a cross between Lily Munster and Valeria Watt. Caroline has died, leaving her house to Gabriella (to Ralph’s annoyance), who now lives there alone except for taciturn gardener Jack. Now Ralph, Tamsin and the others have turned up to stay in the house while they film their documentary in the woods surrounding it, which is where Caroline and Ralph allegedly encountered Herne the Hunter.

The movie’s strength is in its characters, delivered through not just fine performances but a well-crafted, literate script which gives the actors something to work with. It’s a real delight to see genuine banter between characters rather than lame joshing or tedious abuse. Dan and Tash in particular have a flirtatious relationship which is a bang-on piece of subtle but effective characterisation. Tamsin does her best to keep everyone’s minds focussed on the job, while also trying to stop Ralph and Gabriella from upsetting each other. I’ve said it before and I’ll say it again: films are defined by characters and characters are defined by their relationships with other characters. Call of the Hunter gets this exactly right, if anything even more so when arrogant, wealthy producer Max (Jonathan Hansler) turns up in his flashy sports car. (Hansler is quite the BHR regular: he was in Patrol Men, After Death, The Devil’s Business, Axed, Nightmare Hunters, Nocturnal Activity and Convention of the Dead. He also narrated a production of 'The Tell-Tale Heart' directed by Frank Scantori.) 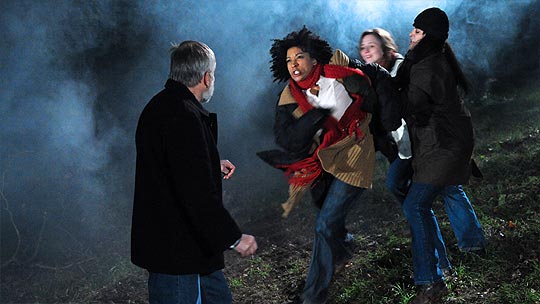 Into this cauldron of simmering tensions – sexual, professional, familial and otherwise – comes a supernatural force, subtly at first. Dan falls downstairs in mysterious circumstances, but he is fairly drunk by that time of night so maybe it’s not so mysterious. Or is it? Tash wakes up alarmed because she thinks something touched her in bed. Two of the characters disappear, one of whom turns up dead. There is, as one might expect, no mobile signal in the area and the landline is out of action so it’s a matter of driving somewhere to call the police. The minibus keys disappear which leaves the sports car. But the gate at the end of the lane is inexplicably padlocked shut.

And then it all goes to shit.

At about 50 minutes, just as this terrific little film is really pulling on its horror trousers and getting into its stride, it completely disintegrates. The characterisation is still there but any sense of narrative coherence goes out the window. Things happen randomly for no reason and don’t seem to relate to anything else. Out of nowhere, the gang hold an impromptu ouija board session to contact Herne, who demands the return of something. Ralph announces that this must be an item never previously mentioned, which has no obvious significance - and everyone sets to looking for it, a process interrupted by one of the characters becoming possessed. In some way and for some reason. 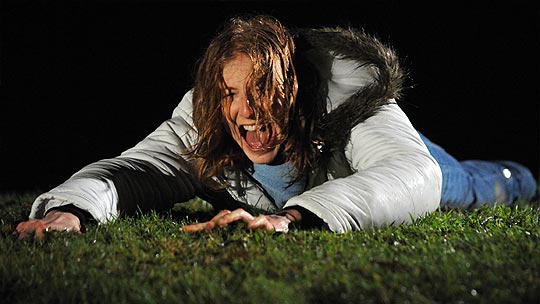 Suddenly continuity becomes something that just happens to other films. Costumes are splattered with blood one minute, then Persil clean again, then bloody once more. And that whole day/night thing is just glossed over to the extent that, if this was to be taken literally, the events of what seems to be 24 hours take place over the best part of a week.

What has very obviously happened is that something has been cut out. Either never filmed, or filmed but found unusable. It’s Alien vs Hunter all over again. Maybe the production ran out of money (£25,000), maybe it ran out of time (12 days) but it certainly ran out of something. And though the first half of the film was in the can, the second half has clearly had to be cobbled together into some semblance of an alternative plot using whatever was actually shot.

Characters run into the house, then out of the house, then back in, then back out as scenes are cut up and threaded together like a raffia table mat. Though the performances remain top-notch, our empathy with these characters evaporates as the story crumbles. I actually reached the point of wondering whether this was all some sort of dream or hallucination. Perhaps it was all taking place in Dan’s mind after he bumped his head falling downstairs in Act 1.

Parts of the third act take place in a collection of previously unseen, unmentioned farm buildings. Eventually one of our survivors realises that perhaps what Herne is looking for is not the previously mentioned arbitrary McGuffin but an important item discussed in some detail. This character then goes straight to a hidden cupboard and finds it there. It’s as if by that point the film has just given up and wants to get to the end credits as quickly as possible. 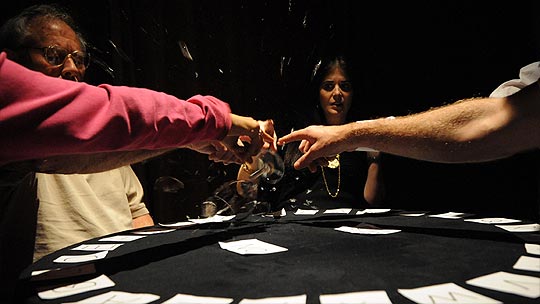 What a crashing disappointment, after showing such promise. Director Anthony Straeger clearly knows how to work with actors (on account of being one himself; he cameos here as Herne) and with a film crew too. Scriptwriter Stephen Gawtry (onetime drummer in obscure new wave band Excel) creates believable characters with clever but realistic dialogue and enough mystery to keep a viewer hooked. Cinematographer Dennis Morgan photographs both day and night, interior and exterior with aplomb, his fine work cut together expertly by editor Anthony Kelly. (Morgan’s various camera operator credits include Revenge of Billy the Kid, Lighthouse, Room 36 and ultra-obscure 1996 British superhero film Stone Man, which I remember writing about in an early SFX.)

But all of that is in the first half of the film. After that second death, Kelly (who also produced) and/or Straeger has manfully tried to create something but you can’t make a silk purse out of half a silk purse. Footage is missing, simple as that.

Elsewhere in the credits, Sally Alcott provided the make-up effects, which include a self-mutilated breast and a small intestine dragged out to its full length. She was fresh out of film school when she made this and has subsequently built up an impressive CV which includes Cut, The Last Seven, Kung Fu Flid, Jack Falls, Kill Keith, Cockneys vs Zombies, May I Kill U? and Dead End plus gigs on X-Men: First Class and World War Z. Nick Tregenza, whose CGI effects include a pretty passable decapitation, also worked on Tied in Blood, The Monuments Men and something about a clone of Princess Diana. Chris Reading (Stag Night of the Dead) handled the fine sound recording. Martin Shenton (Tomorrow Never Dies, 28 Weeks Later) co-ordinated the stunts. Elliott Daniels (Tuck Bushman and the Legend of Piddledown Dale) composed the score - although much of the soundtrack is listenable but not entirely appropriate rock songs. There seems to be no credited production designer. 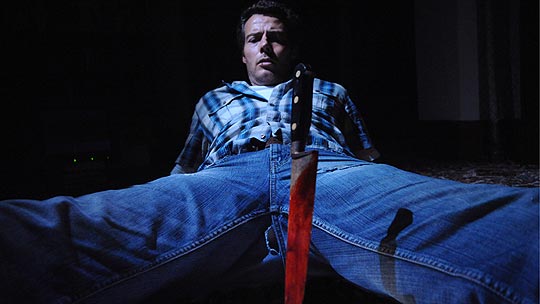 The terrific cast all deserve plaudits but none more so than Instone who brings both cockiness and vulnerability to the cheery, cheeky Brummie - and gets most of the best lines (“If this was a horror film I’d be dead by now”). But though Dan displays a dry, wry sense of humour, the descriptions of Call of the Hunter as a ‘horror comedy’ are very much wide of the mark. A few moments of character-appropriate dark humour doth not a comedy make, and it is completely misleading of the film’s marketing to bill it as such. Or let’s put it this way: if Call of the Hunter is actually intended as a comedy, it fails because while it’s (50% of) an effective horror film, it’s not comedic. Since the ‘comedy’ angle seems a later addition to publicity, my suspicion is that it may be in response to the film receiving more laughter than intended at its handful of screenings.

R Squared Distribution released the film on DVD in the States in November 2009 and Straeger released a UK disc through his own Quid in Shrapnel Productions in September 2010. The movie doesn’t have a BBFC certificate but no-one seems bothered about that sort of thing any more. There was a brief review in Scream and a bunch of laudatory reviews on Amazon, IMDB and a few obscure websites, some of which are duplicates and most of which were obviously written by associates of the film-makers (4/5-star reviews by people who have never reviewed anything else). 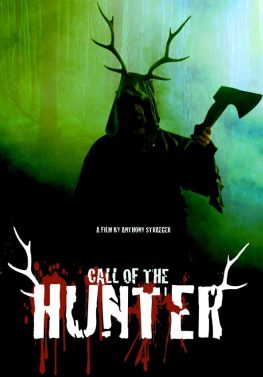 But Call of the Hunter is one of the new breed of British horror movies, one with the freedom to explore different distribution channels. Is it worth buying on DVD for ten quid? With the best will in the world, unless you know the cast or crew personally, no it’s not. But is it worth 76p to watch on your computer? I would say yes. I don’t know whether Anthony Straeger gets a cut of that 76p or whether he sold the rights to someone who sold them to someone else who licensed the film to HorrorInc, Online Movies Box and the other places where it can be viewed. But that’s the distribution model de nos jours folks and it makes a heroic failure like Call of the Hunter justifiably accessible.