I completely missed the first broadcast of this unusual feature-length fantasy in March 2005 so when a repeat turned up in the schedules eight months later, buried away in the small hours of Channel Four with no real clear description on the listings, I had to tape it and find out what it was, especially as there was no sign of it on the Inaccurate Movie Database. The only thing that I could tell in advance was that it was definitely not the martial arts picture Berry Gordy’s The Last Dragon.

What it turned out to be was a fake docudrama - I suppose that makes it a dramadocudrama or a metadocudrama or a pseudodocudrama, or maybe just a drama. I don’t really know what it is, to be honest.

Fifty per cent of The Last Dragon is in the mould of Walking with Dinosaurs; that is, presented in the manner of a nature documentary, using CGI creatures in real locations. We actually follow three or four different dragons through the ages.

Back in the cretaceous period, we find a young male dragon, searching for food in an arid desert, who encounters an equally hungry Tyrannosaurus rex, who has a slight size advantage. Fortunately, the youngster’s mother appears and fights of the T rex who take a severe scorching and lopes off to die. However, the adult female dragon received a broken wing in the fight and so can no longer hunt for food for herself and her son. Weakened, she also dies and the juvenile, who is not yet old enough to fly, survives on his mother’s carcass for a period. 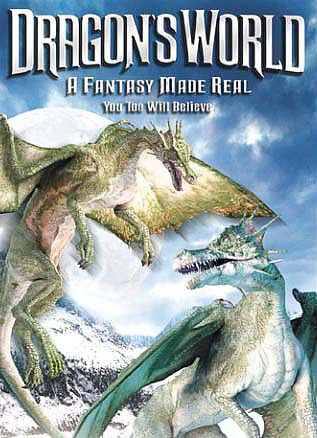 But a big lump of dead dragon meat attracts pterosaurs and circling pterosaurs attracts the attention of an unusually old male dragon, who can only have reached his great age by seeing off a lot of younger challengers. He would rather eat fresh meat than rotting flesh so he chases the younger dragon, and here’s where the biology comes in.

It seems that dragons have two large sacs, connected to their respiratory system, which they are able to fill with hydrogen as a result of aerobic exercise. These not only provide the fuel for their fire-breathing, they also act as buoyancy aids, giving the dragons sufficient lift to be able to fly using their large wings, which would otherwise need to be impractically huge to get them off the ground.

So the young male dragon learns to fly, just in time. After some aerial wandering, he encounters a mountainous area with an established breeding pair and he successfully fights off the male to claim both the territory and the mate.

The question then arises over how something as large as the dragon could have survived the ‘K/T event’ which killed off the dinosaurs, and the answer is that it didn’t. But... there were other species of dragons, including ones which had adapted to life in the sea. With their hydrogen sacs adapted as swim bladders and their vestigial wings in use as fins, these were essentially sea serpents. As the age of mammals dawned, some of the sea dragons returned to the land in Asia to become forest dragons - hence the rather elongated, wingless dragons of Chinese folklore. We watch one of these prowl through the bamboo, stalking a (real) wild pig and then fighting a (real) tiger.

The suggestion then is that some of these forest dragons evolved into mountain dragons not too dissimilar to those that existed alongside the dinosaurs, and our final tale involves a lone female living in the Carpathian mountains in the 15th century. She is able to mate with a male who has travelled up from the Caucasus and one of their two eggs successfully hatches. However, after the male leaves and while the female is out hunting, having been forced to start raiding farms in the valley, a couple of knights arrive to ‘slay the dragon’. They kill the juvenile and then fight the lonely, heartbroken mother - the last dragon. 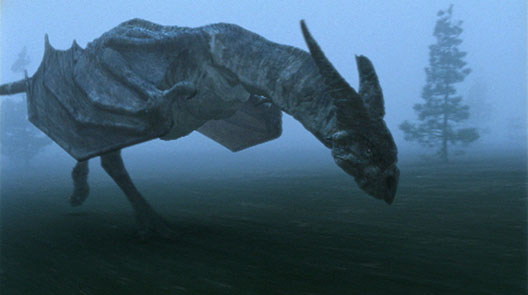 So that’s half the programme, but intercut with this is a modern day ‘drama’ about a young American palaeontologist - variously called ‘Doctor Tanner’ and ‘Professor Tanner’ (Paul Hilton) - who is working at the ‘London Museum of Natural History’. (It’s not clear whether they actually mean the Natural History Museum or whether they’ve invented a fictitious museum for copyright/legal reasons. the actual museum scenes were shot in Oxford.)

This is where the science, which was quite well thought out in the ‘walking with dragons’ sequences, falls apart. Tanner has unearthed a fossilised T rex skull and believes it was attacked by a dragon because it has scorch marks on it. This is slightly ludicrous of course because a fossilised skull is not made of bone but is simply rock on the shape of a skull which has filled up the gap in older rock where the skull was. So running your finger along the blackened bits on the outside and saying “This is carbonisation” should be enough to get you thrown out of any decent museum.

Tanner and two unnamed colleagues - identified only as ‘biologist (Katrine Bach) and ‘data analyst’ (Aidan Woodward, who gets a curious stand-alone credit as ‘co-writer’, as distinct from the ‘script’ by David McNab, Justin Hardy and Charlie Foley from a ‘story’ by those three plus Kevin Tao Mohs) - are sent to the Carpathians to examine the alleged frozen corpse of a dragon. Their investigation of the body - and the scorched remains of two medieval bodies found alongside it in an ice cave - is intercut with the dramatised dragon footage. Their scientific method, however, leaves something to be desired. Tanner investigates the hydrogen sacs by cutting open the body, sticking his hands in and ripping the organs out. And it is only after extensive study and numerous x-rays - which of course could not actually be done in situ - that Tanner and his colleagues realise the creature has six limbs. Duh.

Nevertheless, this is an interesting and entertaining programme. The dragon sequences certainly have the edge - in terms of both script and production values - over the present day stuff, but I can see why the two have been combined in order to provide a more cohesive narrative. As aspects of dragon physiology and anatomy are discovered and/or theorised by Tanner (in voice-over, mostly), we also see how they related to the real things when they were alive.

The most surprising thing about this whole production is that it is British; technically it is Anglo-German, but the principal production company is Darlow Smithson “for Animal Planet, in association with Tandem Communications and Sat 1 Satellitenfernsehen". Checking the Darlow Smithson website it’s remarkable how many of their programmes I have seen and enjoyed, bearing in mind how little TV I actually watch: dramatised documentaries on Albert Einstein (E=mc2) and the Wright Brothers (The Wright Stuff), Station X, Lost Buildings of Britain, What We Still Don’t Know, The World’s Biggest Airplane: Airbus 380; they also made the successful theatrical documentary Touching the Void. 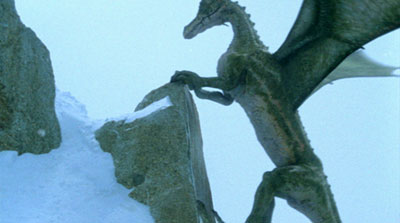 Director Justin Hardy is best known for being the son of Wicker Man director Robin Hardy and for helming the Christopher Lee-starring public school black comedy A Feast at Midnight. His surprisingly extensive CV also include the 2001 Raffles telemovie (with Bach in the cast) and two other 2005 docudramas, The Princes in the Tower (with Hilton as Henry VII) and the rather good Trafalgar Battle Surgeon. Also episodes of Harbour Lights, London Bridge and Hope and Glory, plus a 1997 paranormal documentary series, Strictly Supernatural, narrated by his old pal Chris Lee.

Charlie Foley, director of development at US cable channel Animal Planet, gets a ‘created by’ credit as well as co-credit on story and script. John Smithson, David McNab and Alice Keens-Soper were executive producers. Ceri Barnes, former head of production at Tigress, was producer. Ed Neumeier (RoboCop, Starship Troopers) is credited as ‘consulting producer’. Matthew Graham, who wrote the enjoyable post-holocaust sci-fi drama The Last Train (as well as episodes of Hustle and Spooks) get a credit as ‘script consultant’. Tanner’s boss at the museum, in the prologue and epilogue, is played by Tom Chadbon (The Stone Tape, The Beast Must Die, The Tenth Kingdom).

Curiously, there are three different versions of this programme with three different narrators of the (pre-) historic sequences. When it was broadcast in the USA (as Dragons: A Fantasy Made Real - which is why I drew a blank with the IMDB) the narrator was Patrick Stewart but for the C4 broadcast it as Ian Holm. Apparently there is also a version narrated by Brad Lavelle (Hellraiser II, Nightbreed, Judge Dredd, Razor Blade Smile) which seems to have been prepared for trade screenings but not used because Lavelle (who does a lot of voice work on anime) is not well-known enough. This may also be the version called Dragon's World: A Fantasy Made Real, which seems to be another variant title.

John Howarth, who also worked on Walking with Dinosaurs, was one of two cinematographers while the editor was Rick Aplin whose credits include the outstanding Seven Wonders of the Industrial World, without a doubt the best documentary series of recent years of any sort at all. Framestore CFC handled all the CGI effects, with Alec Knox (Walking with Dinosaurs, Dinotopia, Batman Begins) as CGI supervisor and Mike Milne as director of computer animation. Jamie Campbell was physical effects supervisor. 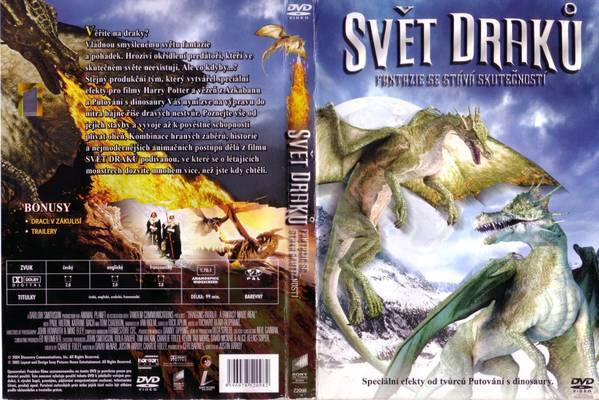 Three biologists are credited as ‘dragon consultants’ and, buried away in the credits, one can spot no less than Neil Gaiman as ‘creative consultant’; I suspect that just means that Neil offered to have a chat with them if they needed him.

Leaving aside some dodgy science and the rather intense, unsympathetic nature of the main (human) character, The Last Dragon is an entertaining, imaginative and clever hundred minutes.