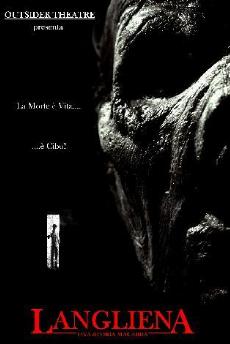 A few months ago (as I write this), Tim Lucas was bemoaning in his Video Watchdog editorial the lack of Italian horror cinema nowadays, with all the old masters being dead or making half-hearted, low-budget (even by Italian standards) TV/DTV stuff. I pointed out that, in listing currently working Italian directors, Tim had not mentioned Ivan Zuccon. Turns out Tim had not heard of Ivan. Hopefully he’ll get the chance to see some of Ivan’s work soon.

I mention Zuccon for two reasons. One is that, eight years ago when I saw the original short version of The Darkness Beyond (which was just called The Beyond) I spotted something special. Since then I have championed Ivan’s work to anyone who will listen, seen him blossom and develop as a director and now his latest movie gets a world premiere at a festival in New York with people like Don Coscarelli and Tony Timpone in the audience.

And with Emiliano Ranzani’s short film Langliena, I may have found another Italian film-maker who can carry that country’s tradition of frightfilms well into the 21st century, making horror movies that are not only very, very good but also very, very Italian.

On the other hand - and this is my second point - maybe Emiliano’s work isn’t that special. Maybe it’s just the first Italian film I’ve seen in a while that wasn’t directed by my pal Ivan. Because at the same film festival in Torino where Zuccon’s Colour from the Dark is receiving its domestic premiere, Langliena is showing as part of a package of no fewer than thirty home-grown shorts, ranging from Bruno Sartorini’s four-minute Stria-Strega (in which ‘a mysterious book provokes strange and destructive instincts’) to Luca Baggiani and Emanuele Contadini’s borderline feature-length, 65-minute Le Legione Fantasma (‘a distant epoch and a curse that breaks the barriers of time’). 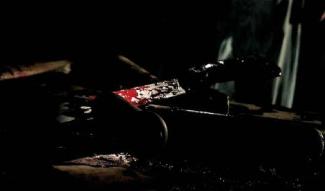 So perhaps fantasy film-making is alive and well in the land of Popes, pizzas and pasta. Maybe there is an Italian Horror Revival to match the British Horror Revival of recent years. Could it be that we’re just not getting to see this stuff here in the English-speaking world? Perhaps Langliena will open the floodgates.

Because this extremely professional-looking six-minute short is a little gem that any international horror film festival would be pleased to screen (and indeed some already have). And if all those other films playing the Tohorror Filmfest are half this good, then I want to see them, you want to see them, we all want to see them.

Of course there’s always the matter of language and it helps enormously that Langliena has very, very good subtitles, a quite poetic translation of the voice-over monologue which a character identified only as ‘the Protagonist’ (Omar Ramero) recites into a reel-to-reel tape recorder. In the flashback which constitutes the bulk of the film, we watch him investigating an old shack in the woods wherein he finds evidence of horror: blood, meat-hooks... and something else. Something alive.

“Do you know what a ghoul is?” he asks the tape recorder and the audience. Played by Alessio Vacchi under some impressive make-up, this sub-human creature begs to be fed. But the ghoul is not what has created this little house of horror in the woods because the ghoul is chained up and the door was, until our hero broke it open in an act of feline-dooming curiosity, firmly locked. The ghoul belongs to someone and if that someone traces whoever has broken into the forest shack... well, the ghoul may be fed after all.

This is an almost perfect little slice of horror. It’s not a second too long, there’s not a shot wasted, it is edited together with precision (by 23-year-old writer-director Ranzani) and the cinematography by Mauro Regis is simply gorgeous. Regis captures the beauty of the Italian woodland as expertly as he photographs the shadows and bloody gloom of the shack interior. 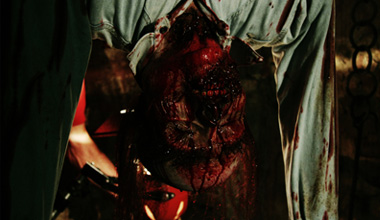 The excellent special effects were created by Emanuele De Luca who was a protégé of Rosario Prestopino, an effects man who worked with Lucio Fulci, Ruggero Deodato, Michele Soavi, Lamberto Bava and many other big names in Italian horror. Langliena is dedicated to Prestopino’s memory; you can see some more of De Luca’s work at www.emanueledeluca.com. The music credit is shared between Giorgio Grosso and Richard Kosinski, the latter being a regular Full Moon composer whose credits, mostly directed by Ted Nicolaou, include Leapin’ Leprechauns, Totem, Vampire Journals and all four Subspecies pictures.

I’m really glad that Emiliano Ranzani sent me a copy of Langliena and I am very much looking forward to seeing what this exciting young director can do in the future.