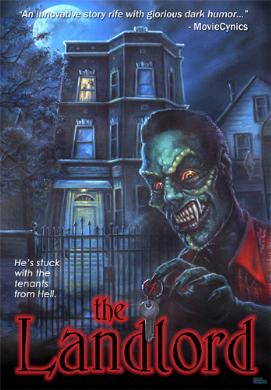 The Landlord is that rare creature: a genuinely funny horror comedy which derives its humour from character and situation rather than lampoon or spoofery. I first caught part of the film at the 2009 Festival of Fantastic Films and a few months later, when a press release about the DVD appeared, I made sure that I collected a screener. And I’m glad I did.

Derek Dziak stars as Tyler Czarnecki, the landlord of the title. The building he manages was his childhood home although it technically now belongs to Tyler’s sister Amy since he sold her his half.

There are three apartments: Tyler lives in one, Ms Lipinsky (Joan McGrath) in another and the top floor is rented out to a succession of tenants, none of whom stays very long. This is because the building is home to two flesh-eating demons: lupine demon-queen Lamashtu (Lori Myers) and her servant Rabisu, played to comic perfection by resonant voice-artist Rom Barkhordar (who does Subzero for Mortal Kombat games, appeared as a child in Every Which But Loose and was also in a stage production of The Elephant Man).

Lamashtu speaks only in a (subtitled) demon-tongue and maintains a haughty regal aloofness from the human world but Rabisu, with his cheery, optimistic disposition, is a great foil for Tyler’s impotent frustrations as yet another tenant falls prey to the demons’ murderous possession-powers before paying their second month’s rent. 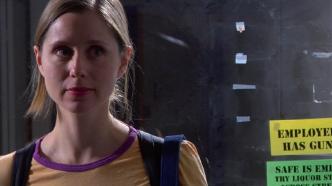 There is a great sitcom in here somewhere, especially with the law enforcement double act of uptight, white Detective Lopez (Kurt Ehrmann, whose stage credits include Equus, Rhinoceros and Death of a Salesman) and calm, black Detective Rosen (Ezekiel Brown). Lopez is determined to uncover Tyler’s serial killer status but he’s got no evidence and Tyler is adamant that he is just unlucky in having tenants who up and disappear.

Enter Donna (Erin Myers), with one crate of belongings, she is on the run from her abusive husband Reggie (Brion Bliss, who was half of a Blues Brothers tribute act) and wants only two things: a divorce and an abortion. When Donna moves into Tyler’s vacant apartment, Lamashtu takes an interest in the phoetus and makes Rabisu imprison the young woman. This drives Tyler to desperation, especially as he and Donna seem to be getting along so well when she accompanies him to the local bar’s karaoke night.

Meanwhile, Amy (Michelle Courvais, who was in a horror short called A Haunted House) has her own problems. She is a bent cop, cheating on her husband Gary (Brian Amidei, a member of the Wildclaw ‘horror theatre’ company which has presented versions of Lovecraft’s Dreams in the Witch House and Machen’s The Great God Pan) with her equally corrupt partner Warren (Rob McLean). Amy and Warren have some sort of scam going on with various individuals with scuzzy skin, long sharp teeth and an invulnerability to bullet wounds. It’s not entirely clear what these are; they’re referred to as ‘ghouls’ in the credits. It’s also not entirely clear what the deal is between them and the cops but it involves setting the ghouls on junkies and other lowlifes and some sort of payback to the bent cops. 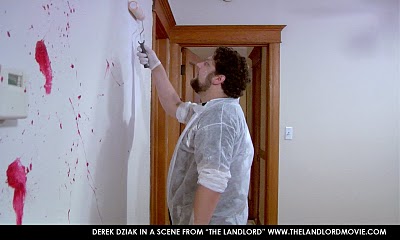 Things get complicated when Amy, with Warren’s assistance, kills a ghoul out the back of a cafe for - well, it’s yet another thing which isn’t entirely clear but seems to be because he approached her in the cafe with a pile of bloody money when he wasn’t supposed to be seen with her in public. Or something. Anyway, it seems these ghouls aren’t invulnerable to having a broken beer bottle rammed repeatedly into their chest. Quite a bloody scene this, and short on laughs.

This angers local gangster ghoul Dimitri who takes his revenge first on Warren and subsequently on Amy. And here’s where The Landlord has its biggest problem which is: there is no obvious connection between Tyler’s A-plot and Amy’s B-plot. Yes, they’re siblings and granted, Tyler is crashing over at Amy’s on the night that Dimitri’s ghouls come calling. But her situation is entirely unrelated to his.

We eventually learn, in a flashback to Amy and Tyler’s childhood, the origins of Lamashtu and Rabisu and the reason why the two humans are enslaved to them (although Amy seems remarkably unenslaved, living happily with her husband and kids a few blocks away while Tyler has to paint over the blood and dispose of the body parts). But there is no indication of how or why Amy became involved with the ghouls. It’s like two different films have collided.

This is unfair on audiences. We expect things to come together at the end and, while some things do come together - including the otherwise underused Ms Lipinsky and a nice comic performance from Amanda Cohen as Baba, cynically efficient proprietor of a local witchcraft shop - the whole Amy/Warren/ghouls thing is entirely separate to the Tyler/Donna/demons storyline. And, without giving away any spoilers, it is also slightly frustrating that the demons’ eventual downfall comes from infighting rather than any triumph by Tyler. 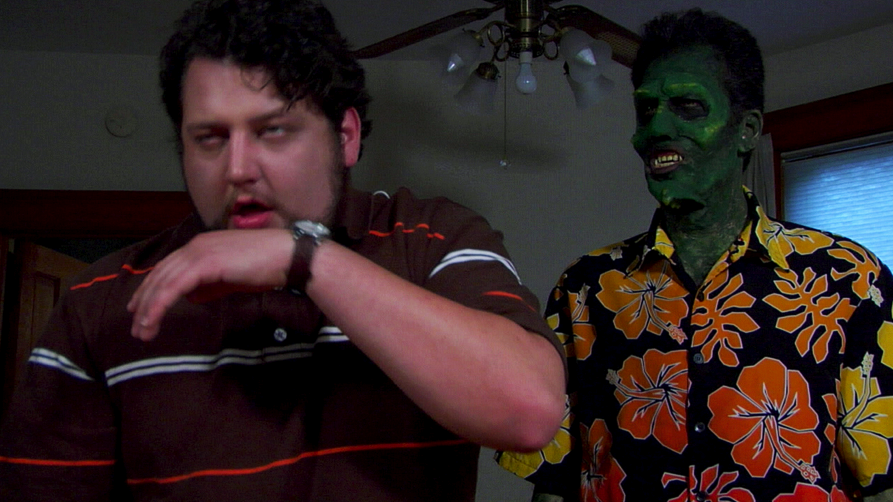 While we’re at it, there is a funny but basically irrelevant scene introducing Donna as she tries to rent a room in an ultra-scuzzy hotel, with writer-director Emil Hyde as the clerk letting rooms by the hour to local whores. It’s a good scene but it has no bearing on the plot and in fact leaves us wondering why Donna is one minute trying to pay for a room for the night in a shit-hole and the next time we see her she can afford to put down a deposit on a whole apartment (albeit one with a surprisingly low rent).

However, such structural problems are more than compensated for by Hyde’s brimmingly confident script and direction and some terrific performances which generate laughs by playing things straight. At heart, the comedy in The Landlord comes from that old staple: exploring the practical aspects of a fantastical situation. There is a great gag about Tyler realising that the dimensional portal to hell in his basement can also function as a waste disposal for body parts.

But it’s Barkhordar who is the comic soul of the film, with Dziak’s Tyler as essentially the straight man. Green and scaly, with a polite, formal nature and a penchant for Hawaiian shirts, Rabisu is a terrific comic creation, especially when he finds Tyler’s credit card and starts ordering products from a shopping channel.

I laughed out loud several times at The Landlord, and we all know how many ‘comedies’ there are out there which don’t so much as crease the corners of one’s mouth. Phil O’Neil’s cinematography suffers in some of the dark scenes but the editing and effects are good and Karen Sandvoss’ music works well.

Emil Hyde (it’s not his real name but it’s similar to his real name), Phil Johnson and Norwegian teenager Ole Jørgen Næss are credited with visual FX; Jen Hiltwein and Matt Stratton with special fx; Kristin LeClair and Crystal Portillo with make-up FX. Most of the cast seem to have a background in theatre companies around Chicago. 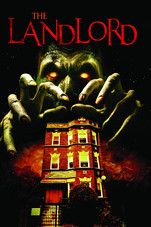 The DVD, released through Tempe, includes a deleted sequence, an extended scene and two full-length versions of video clips watched by characters in the film, totalling seven and a half minutes altogether. There is also a fairly entertaining 23-minute Making Of, a silly three-minute film by the same cast and crew called Guess Who’s Coming to Breakfast, a trailer for The Landlord and a trailer for Hyde’s earlier film Escape from Planet Love, plus a cast and crew commentary and optional drinking game captions.

Very enjoyable and skilfully crafted, The Landlord is a solid slice of monster fun.