Kenneth Barker’s ambitious debut feature is a children’s film which tells us three things we didn’t know about dragons: they’re real; they’re invisible; and they live in Leeds city centre.

A prologue set 2000 years ago sees beardy chieftains Duretus (bad) and Vortigern (good) sent to sleep by two glowing entities called Necrellians, but Duretus somehow wakes up in 1789 and promptly imprisons Vortigern, who is ‘the Keeper.’

Scoot forward to 1999 and we meet accountant Troy Franklin, who wears a suit but has long hair and a beard. He is sent by his oddball bosses to investigate a wealthy financial partner named Mr Duretus, in the grounds of whose stately home he encounters trespassing oddball amateur scientist Aristotle Wood and his children Spartacus and Ophelia. Aristotle is looking for ‘cryptomorphs,’ for which read dragons.

Duretus, in order to take over the whole of Britain using a frozen army kept in the 2,000-year-old cellar of a Leeds office block, has to eliminate the few remaining dragons, and to this end calls in a dragon hunter, Mademoiselle Celine. Armed with an outrageous French accent, a dwarf sidekick in a bowler hat, and a sophisticated telescope, she sets out to hunt down the five remaining dragons, known as War, Wisdom, Vanity, Greed and Naivetë. Aristotle and Troy rescue Vortigern and brace themselves to defeat Duretus.

For a kids’ film, the script is pretty complicated, and the two youngsters have relatively little to do, though that’s fair enough as eccentric Aristotle and incredulous Troy are the interesting characters. The acting, it must be said, is mostly no great shakes, though Simon Kirk plays Troy well, reacting with the right mix of cynicism and pity to those who believe in dragons until he meets Wisdom herself. Manouk Vandermeulen as Mlle Celine has the best part, hamming up a villainous role and making the most of her many costume changes (including one very odd moment when the film becomes a 1920s silent for a minute or two...). Graham Hughes is also excellent as her sidekick (who is revealed in the end credits to be called Ismail Beard); he looks and sounds remarkably like the late David Rappaport.

And what of the dragons? Well, they’ve been created on a desktop computer so don’t expect Jurassic Park, but they’re well animated and well-integrated with the backgrounds. Unfortunately they are mostly seen static in profile or head-on, which rather defeats the purpose of rendering them in 3D animation. The designs (by director Barker and Arif Majothi: The Witches Hammer) are interesting, especially War with his two pairs of wings, and the characterisations fit their names. However, they do need to be seen in terms of the film’s tiny budget (and the state of desktop animation a few years ago) - or through the eyes of a small child. 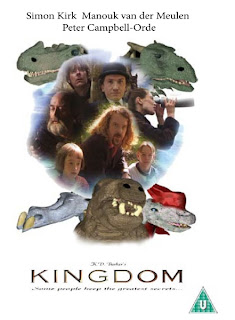 A tighter script and tighter editing would have helped. Dialogue is a little leaden, not helped by pauses between lines. Kids and adults alike would enjoy this more with more zip to the dialogue and, to be brutally honest, more wit. Mlle Celine is great fun in her pantomime way and some of Troy’s background reactions to Aristotle and Wisdom are priceless, but Vortigern and Duretus are bland characters with no real sense of mission or conflict.

Kingdom is an interesting curio and is recommended to fans of independent cinema interested in seeing what can be achieved on a tiny budget (£30,000 for the whole thing!), especially those fans with small children. Artistically it doesn’t achieve the standards that it reaches technically, but Barker and team are to be congratulated on their ambition and dedication. Why not take a chance on an independent British production which is trying to do something a bit different?