Conor Timmis, the 25-year-old behind Kreating Karloff, and I have at least one thing in common. We both believe that William Henry Pratt was one of the finest actors to ever grace a cinema screen and that he remains under-appreciated, beloved by a few horror movie fans but, in the overall zeitgeist, just a name at the back of people’s minds, vaguely connected with Halloween.

I have said it before and I will say it again: there is no such thing as a bad Boris Karloff film.

What Timmis would like to see, and I don’t think it’s an unreasonable request, is a decently budgeted Hollywood biopic of Karloff. There’s a biopic of Chaplin, there’s one of Ed Wood for goodness’ sake. Why not Boris? So in May 2006 Timmis assembled a cast and crew for three days to recreate a handful of scenes from Frankenstein and The Mummy, with himself as Karloff, in the hope that this might demonstrate the feasibility of - and potential interest in - such a project.

And if such a feature did get made, well, there’s no reason why Conor Timmis should not be cast in the lead. (Well, there is a reason, of course. No-one has heard of Conor Timmis but everyone has heard of Brad Pitt or Ben Affleck or whatever name actor they might cast in the lead. Still, you can’t blame the lad for trying and at the very least he has created a terrific showreel which demonstrates not only his acting ability but also his determination and his organisational skills as a producer.)

Timmis directed the recreated scenes himself while the documentary footage that surrounds them was directed by Vatche Arabian. This mixes to-camera interviews with behind-the-scenes shots and includes potted biographies of Karloff (which very sensibly emphasises the range of his non-horror work) and make-up man Jack Pierce. Film/music journalist Steve Vertlieb (onetime Associate Editor of The Monster Times!) wrote some of the material and is interviewed. 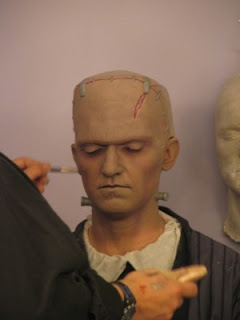 Kreating Karloff works on all three counts: in recreating the physical appearance and mannerisms of Karloff, through the acting of Timmis and the extraordinarily detailed make-up of Norman Bryn; in recreating the look of the two films, thanks to excellent black and white HD camerawork by DP Scott Sniffen; and in documenting the whole process, not just the how but also the why.

This could easily have become a vanity project, but it’s not. What comes through above all is the sincerity. It is clear that Conor Timmis is a very, very smart young man who has managed this whole project - from finance to promotion - not to boost his own ego or to foolishly compare himself to Karloff but because he genuinely and sincerely believes that the work of a fine artist should be better known and duly celebrated. Combining this care and passion with the sensitive and uncluttered documentary skills of Arabian (who has previously directed Timmis in the title role of Booth, a short film about Lincoln’s assassin) has resulted in a film which is a delight to watch and which reawakens one’s desire to go off and watch a real Boris Karloff film. Can there be a better recommendation than that?

Conor Timmis has a few film and TV credits under his belt, most notably as Rudolph Hess in a production for the History Channel. Sniffen’s work includes Star Wars adverts for Pepsi and an extraordinary sounding fantasy feature called The 1,000 Year Reich (I’m sure the alarming Nazi theme developing here is pure coincidence!). Bryn worked for several years on All My Children and also did character make-up for Saturday Night Live. The role of Zita Johann in the Mummy sequences is taken by Liesl Ehardt, who has been in episodes of Monk, Dawson’s Creek and Sex and the City but was cast here because she is actually a distant relative of Zita Johann herself.

Ehardt does a good take on Johann but ultimately this stands or falls on two things: Bryn’s make-up (which is superb) and Timmis’ own performance. Or rather, performances: as Boris Karloff as the Frankenstein Monster and as Boris Karloff as Ardath Bey. And he does a sterling job, truth be told. He treads a very fine line; it would be easy to go overboard on Karloff’s lisp or the way he rolled his Rs but Timmis keeps the vocal mannerisms subtle and therefore believable. While he’s no ringer for Karloff out of make-up, he has enough similarities - tall, thin with a narrow face and high forehead - to form a good base for Bryn’s prosthetics. Let’s face it, if Hollywood can make Martin Landau look like Bela Lugosi and Will Smith look like Mohammed Ali, anything is possible.

Timmis has obviously spent a great deal of time studying Karloff, both in general and in these specific scenes, and his portrayal - I deliberately avoid the term ‘impression’ or ‘impersonation’ - is remarkably accurate. And Sniffen’s photography is terrific too. If there is a downside it’s that the HD camerawork is too clean. We are used to seeing these films jumpy and crackly and this pristine version seems to jar with our memories in that way. But that’s pedantry and it won’t stop me from wholeheartedly recommending Kreating Karloff, which I expect to be a staple of film festivals for the next couple of years.

It would be nice to see this released on DVD, with maybe a selection of Karloff trailers and one or two pertinent interviews. But it would be even nicer to see it, one day, as an extra itself on the two-disc special edition of Karloff: The Movie.