The Land Before Time VIII: The Big Freeze 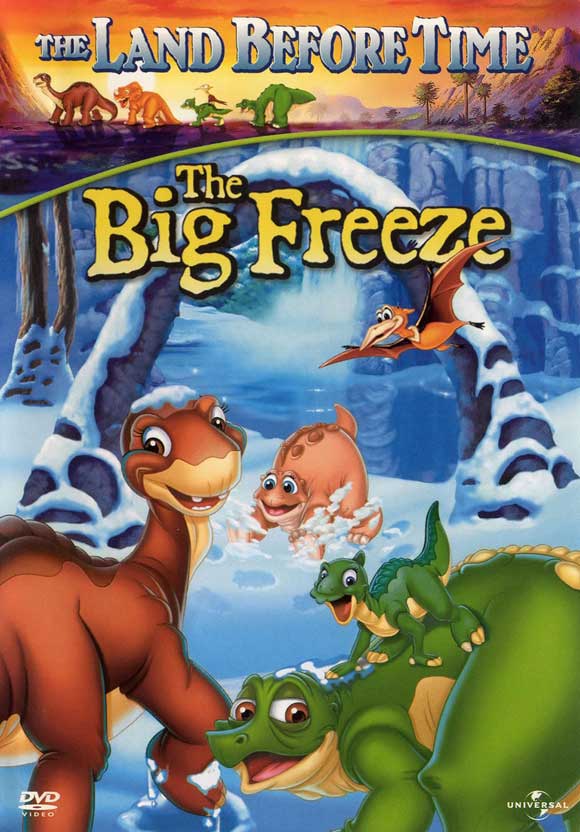 When I reviewed The Land Before Time II: The Great Valley Adventure, it was just a whim. I didn’t think too many people would be interested in the first of an endless stream of stravisnuts spun off from a non-Disney animated feature about baby dinosaurs.

So here is my second venture into the prehistoric world of Littlefoot, Cera, Ducky, Petrie and Spike - The Big Freeze. In this one, an ice age comes to the Great Valley; at first everyone loves playing in the snow (“frozen ground stars”) but they soon discover that the plants are dying because of the cold, taking away the leaves or “tree stars” on which the dinosaurs feed. (Remember: the Great Valley is home only to herbivores, despite the ecological unsoundness of such a set-up.) 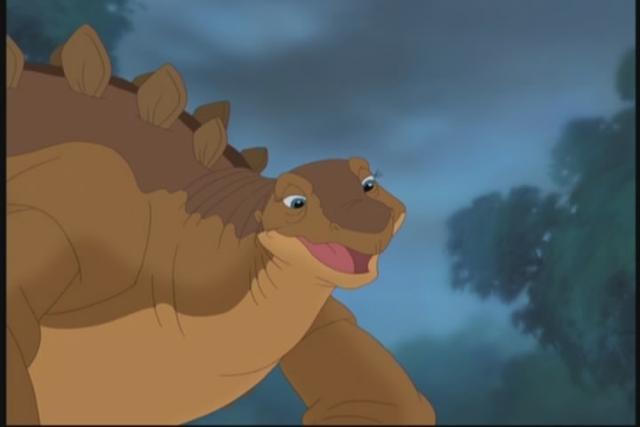 Back in Part II, the valley was completely isolated and the story involved the baby dinos accidentally opening a passage to the outside world. By Part VIII, the valley is obviously accessible because a herd of stegosauri (“spiketails”) is passing through. Silent, ever-hungry Spike is the only resident steg in the valley, an orphan who lives with Duckie and her family. Now he meets a new friend, Tippy, and goes with him and his mother as the herd leaves the valley, just as the snow arrives. Duckie, who was up till then getting increasingly fed up with her adopted brother’s snoring, misses him dreadfully and sets off through the snow to find him, so Littlefoot, Cera and Petrie follow on later in search, in turn, of Duckie.

New to the cast is Mr Thicknose (Robert Guillaume), a grumpy old styracosaurus who is revered as the wisest dinosaur in the valley and who teaches the children. Unfortunately, his failure to predict the ice age and the disappearance of all the food makes him a pariah. Isolated, he accompanies the youngsters on their quest to find their friend. Unfortunately, as they go through the pass, a massive snowfall leaves the way behind them blocked - which is basically the reverse of the plot in Part II.

After locating Duckie and escaping a T rex, they discover a hot spring which not only supplies a refreshingly warm pool of water but also fosters the growth of plants. By causing another snowfall to clear the pass, they are able to lead their parents and the others to the food and warmth, just as Spike arrives, having led the shivering, hungry stegs with his unerring ability to locate food. Everyone lives happily together until the thaw comes - so it’s more of an ice week than an ice age - whereupon Tippy and his herd leave with the promise that Spike can visit any time and Duckie welcomes her big brother home again. 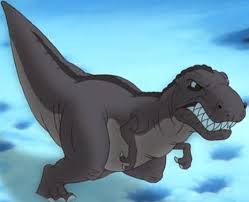 I actually enjoyed this more than Part II. It wasn’t as cute and it didn’t play up the whole herbivores-vs-carnivores stuff. I think the songs are marginally better and there is some surprisingly serious social commentary in the dinosaurs’ attitude towards Mr Thicknose. Cera’s father in particular is keen to ostracise him. The film therefore has stuff to say about old people as well as youngsters. On the downside, the pool fed by the hot spring is pretty small and there seem far, far fewer dinosaurs than in the earlier film, suggesting that the ecosystem is collapsing - although there are at least another three films after this one.

Littlefoot (in Parts V to IX) is voiced by Thomas Dekker who was 13 when he made this film. He also had the lead role of Fievel in Parts III and IV of An American Tail and, aged six, was one of Picard’s alternate reality sons in Star Trek: Generations. I assume his voice broke after Part IX, but no such problems for the female voice artists: Anndi (sic) McAfee was Cera from Part V to Part XI and in the forthcoming, inevitable Land Before Time TV series. Her coolest credit is a 1998 animated episode of Batman: Gotham Knights in which she voiced Carrie Kelley, the girl who took on the mantle of Robin in The Dark Knight Returns. 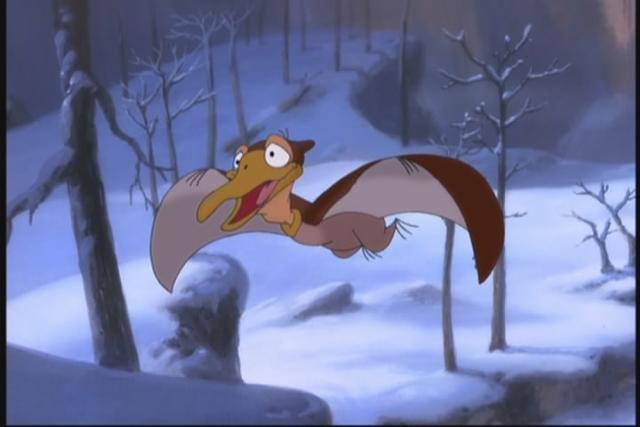 Jeff Bennett’s voice broke long ago (he was in his mid-20s when he made Friday the 13th Part VII) but Petrie has such an artificially squeaky voice that it doesn’t matter so he has played the little pteranodon in every film since Part II. He also has Batcredits: the Batcave computer in Batman: The Animated Series, TV anchorman Jack Ryder in Gotham Knights and various voices in Mask of the Phantasm and The Batman vs Dracula, plus a million cartoon shows, animated features and Star Wars video games. Most of all though, Jeff Bennett is the voice of Johnny Bravo and we, therefore, are not worthy. Aria Noelle Curzon has played Duckie since Part V and Rob Paulsen has provided Spike’s occasional grunts since Part II, with both of them still around for the TV show.

Kenneth Mars (Parts II to XI) and Miriam Flynn (Parts V to X) are Littlefoot’s grandparents while Tress MacNeille who voices Duckie’s mother is better known for playing Principle Skinner’s mother in The Simpsons. Tippy is Jeremy Suarez (Koda in Brother Bear) and his mother is Susan Krebs (Earth Girls are Easy). Robert Guillaume’s distinctive, rich tones provide the voice of Rafiki in The Lion King and its sequels and spin-offs. His genre credits include Meteor Man, Big Fish and Pandora’s Clock. Mr Thicknose did not appear in any of the other LBT sequels.

Charles Grosvenor seems to have made a career out of the Great Valley. He has a few earlier credits but since 1997 all he has done is direct and produce Land Before Time sequels. John Loy, curiously, wrote Parts II, III, V, VI, VIII and X (but not IV, VII, IX or XI) as well as O’ Christmas Tree, the Hercules and Xena animated movie, Alvin and the Chipmunks Meet Frankenstein/Meet the Wolf Man and, by way of a live-action change, Beethoven’s Fourth. 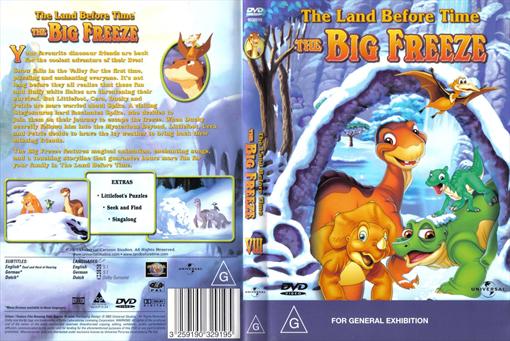 Incidentally, take a look at the two sleeves here. One shows the five main dinosaurs, but in the other, Cera has been removed and Tippy added (as well as a few adjustments like flipping Petrie so he flies the other way). This instalment in the saga is much more about Duckie and Spike than Littlefoot and Cera, although Cera does get to sing a song and ultimately saves the day by yelling loud enough to cause a snowfall, so it’s a bit rotten that she has been cut from the most commonly used video sleeve. She needs a better agent.