Screenwriter Chiaki J Konaka has worked on many Japanese series that are familiar to western audiences, including cult anime (Bubblegum Crisis), Saturday morning cartoons (Digimon) and live action (Ultraman Tiga), as well as writing feature films, notably Evil Dead Trap 2. Now, with the extraordinary Malice@Doll he ventures into CGI territory. Mr Konaka has his own website and, since his English is considerably better than my Japanese, I was able to interview him by e-mail in January 2003.

What was the original inspiration for the story of Malice@Doll?
"The idea came from imagining the world where Malice lives. Before writing the script, I had wanted to make this film using stop-motion animation like Czech film-makers such as Jiri Trnka or Jan Svankmajer.”

How did your script affect the character and creature designs; or how did the designs affect your writing?
"The writing of the script and designing of the characters proceeded in parallel. I gave inspiration to the designers and they in return inspired me.”

Why was the 'camera' kept stationary in every shot in the film?
"That was what Mr Motonaga wanted. He doesn't like typical CGI images.”

Why was Malice animated traditionally, rather than by computer, when she became a spirit at the end?
"That was not only the spirit Malice; she was variously animated both by computer and human animators. Mr Motonaga is an anime director, not a specialist in CGI. He made the film as he wanted to see it.”

What are the literary or cinematic influences on this story? Is it influenced by Alice in Wonderland? Or by the novels of Philip K Dick?
"As I said, I quoted the stop-motion animation films of Trnka, Svankmajer et al. But the frame of the story, yes, is Alice in Wonderland. And you are correct in surmising that Philip K Dick is one of my favorite writers.” 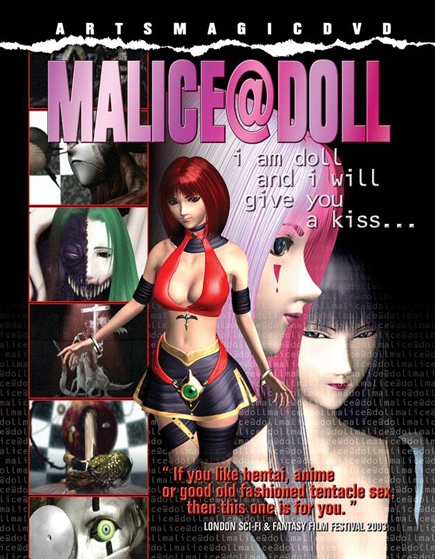 How long did it take to make the film?
"Almost a whole year.”

How was the film distributed in Japan? Did audiences like the film? What did critics and reviewers say about the film?
"Malice was released on video in Japan. I can't honestly say it was successful at a commercial level, but people who like cutting edge films loved it.”

When writing the script, did you treat the story as anime or live action or something different?
"I wrote this as grand guignol.”

What is the significance of the ghost of the little girl?
"Whatever she signifies or symbolises, that is something that belongs to the audience and is for the audiences to decide.”

Why does Malice stay beautiful when she becomes human, but the other dolls become monsters?
"Malice was the carrier of the ‘infection’. This story can be grasped as a variation of the traditional vampire story.”

Perhaps I am seeing something which is not there, but: in this film, there is a sort of disease (life) which makes people suffer and die, and it is spread by love (kissing) - is this an allegory for AIDS?
"In anything that I write, I don't want explain too much about the story. I just want the audience to see and feel things that are influenced by their own standpoint. But in this case, I have to say no, it’s not an AIDS allegory. If I dealt with AIDS in my fiction, I would do it a different way.” 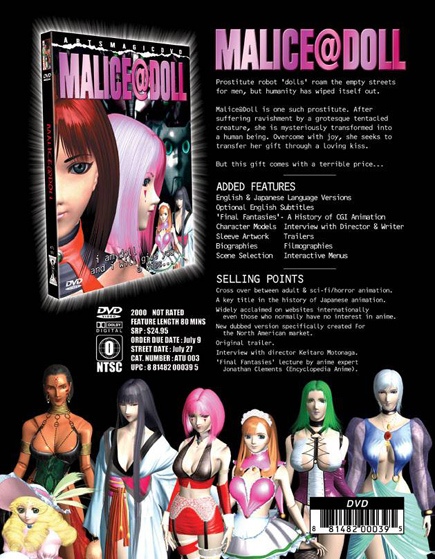 Do you have any plans to work again with Mr Motonaga, Mr Nishioka or Mr Moriki?
"Unfortunately not this time.”

What is the connection between the film Malice@Doll and the dolls which you make?
"Making actual dolls is a completely different matter from writing. But this film was an interesting experience which led me to think about what a doll actually is.”

What projects are you writing now?
"I have just finished writing the second season of The Big-O. I am now working for some new animation series, and I will write a long horror novel this year.”

interview originally posted before November 2004
Posted by MJ Simpson at 19:06