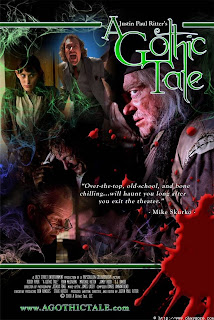 The second feature from Justin Paul Ritter (KatieBird *Certifiable Crazy Person) is one of those films which, though artistically marvellous and technically impressive, is narratively impenetrable. Looks fabulous, well crafted, makes not a lick of sense as far as I can see.

The thing is, when a film is this well made but still doesn’t have a clear, understandable narrative, you can reasonably assume that it’s deliberate. Ritter doesn’t want people to easily follow what’s going on here. This is more a stream of consciousness than a story. It has ‘personal passion’ stamped all over it like an anti-bootleg watermark. Ritter has put his soul into this film - and it shows. He doesn’t have to give us an easy ride, so don’t be disappointed when you don’t get one.

Ostensibly this is based on three classic short stories: ‘The Tell-Tale Heart’ by Edgar Allan Poe, ‘Markheim’ by Robert Louis Stevenson and ‘Dr Heidegger’s Experiment’’ by Nathaniel Hawthorne. The Poe tale is the only one I’m familiar with but I checked synopses of the other two on Wikimaninapub so I would have some idea what to look out for. But to be honest, this is ‘inspired by’ rather than ‘based on’, the only obvious, direct connections with the source material being a character called Mark Heim (sic) and another called Dr Heidegger - who is conducting an experiment. Nevertheless, in conflating three unconnected literary sources into a single storyline, this joins The Shunned House in the micro-category of what I like to call an ‘unthology’. 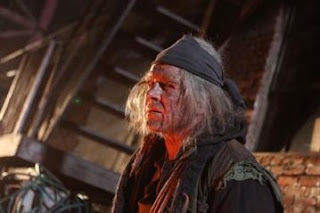 Thomas Heidegger (CJ Baker: Devil Girl, Stupidman) is a solitary old guy working on some sort of reanimation or rejuvenation device (in the Hawthorne tale, his work involves water from the Fountain of Youth). He has a daughter Lillian (stage actress Jamey Hood making her feature film debut) and a protégé, Mark Heim (Marshall Hilton: Breakfast with the Colonel, Sorceress II, Beetleborgs) who is romantically linked with Lillian. Confidently defying chronological storytelling, the film contains numerous flashbacks to thirty years earlier when Lillian (Rena Enea) was a little girl and Mark (Randy Shelly: Beowulf) was a teenager who came to live with the Heideggers under mysterious circumstances. Young Thomas is played by Emrys Wright (who unfortunately doesn’t look that much like Baker) and his since-deceased wife Rose is played by Lake Sharp, who was in an episode of Curb Your Enthusiasm.

Weaving in and out of both current and flashback scenes - and appearing identical in both time frames - is ‘The Stranger’ (Ryan McGivern, who was in the web series Bones: Skeleton Crew), whose smart suit and Van Dyke facial hair mark him out as some sort of demonic/satanic agent, possibly Old Nick himself. A similar character is the antagonist in the Stevenson tale. While never actually vanishing or appearing from nowhere on screen, The Stranger is in the habit of popping up in scenes without explanation or announcement when the characters are not necessarily expecting him. This supernaturally Machiavellian catalyst drives the complex story through his instructions and offers to the other three, yet he is clearly not as in control as he would like to be and in some scenes is restraining himself, barely controlling his anger or frustration.

In fact, all four main characters spend a great deal of the film with heightened blood pressure, muscles straining, veins bulging in their necks. This is a very intense film about intense, unhappy characters. Frankly, I can’t recall anyone smiling during the entire 104 minutes, with the possible exception of Rose Heidegger, comforting her daughter. 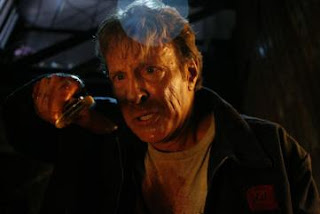 Mark is a drunken bum, a petty thief who can only rail “Fuck you!” ineffectually at the equally drunken street whore (the wonderfully pseudonymous Zenith Lovecraft) who steals his beer when he pushes her away from their grimy, alleyway embrace. Lillian has been taken in by a hostel run by a city pastor (Thom Michael Mulligan: Callous) where she is befriended by a young woman named Brenda (RADA-trained Nancy P Corbo: Rift) and put to work by the cook (Jeanne Mount: Dreamkiller). Thomas experiments with reviving wilted roses and then digs up a corpse which may be his wife, I think.

A steel briefcase is important although I wouldn’t say it was necessarily central enough to be considered a McGuffin. The Stranger was going to give it to Thomas a part of a deal but held onto it when Thomas broke some sort of rule. Later (in chronological time, but at the start of the film) Mark steals the briefcase from someone and then sells it to Thomas. I think. Mark’s parents (Derek Grauer: Haunted House; and Maria Olsen: Dragonquest, Sam Hell) also feature in flashbacks. Michael Villar, who plays a detective here, takes the title role in Ritter’s forthcoming zombie picture The Living Corpse, which also features several other Gothic Tale cast members.

Throughout the film (although to a lesser extent towards the end) we have the enigmatic narration of a street bum narrator, sometimes on screen, warming himself by a brazier, sometimes in voice-over. Underneath the woolly hat, rasping voice and scabrous make-up is none other than genre legend Roddy Pipper (They Live, Hell Comes to Frogtown) adding a whole extra level to this already multi-levelled enterprise. 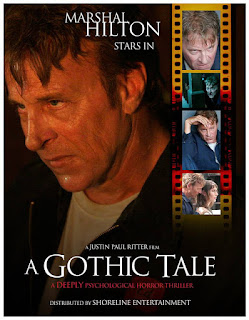 Stylistically, A Gothic Tale really stands out in three ways. The first is that Ritter (or possibly his DP Josh Fong, who also lit KatieBird and gets a co-producer credit here) really likes to shoot up close. There are very few wide shots here, it’s all close-ups that are slightly too close-up for comfort: tops of heads are often deliberately cropped. It’s not extreme close-up - no mouths filling the screen - but it adds to the intensity of the script and the performances and imparts a sense of urban claustrophobia to the whole film. In addition, Ritter is fond of splitting the widescreen image to show us two scenes at once, or two aspects of the same scene. He also has a fondness for a slight solarisation with a blue sheen.

Sometimes all three techniques are combined. On top of the non-chronological jumping about between scenes (which is exacerbated by The Stranger looking identical in all of them, even to wearing the same tie), this just makes the film harder to follow - and yet, in some strange way, all the more rewarding.

Production designer Alex Cassun (director of Sunset in the Valley) has given the film an ambience which certainly allows it to live up to its title, yet there are no mist-shrouded castles here. This is an urban gothic, dark like an unlit alley, unnerving like an empty building. No cat scares here, it’s all atmosphere.

There is nothing to say where or when this is. America obviously but only from the accents. There seems to be little specific about the clothes apart from The Stranger’s suit and tie (and haircut) which suggests the cusp of the 1970s/1980s. In fact, it looks like the first week of June 1979 - but since he is a supernatural being who looks identical in scenes set three decades apart, this does not help us one iota. The point surely is that this is everywhere and nowhere, everywhen and nowhen, no more a pin in the map of reality than the House of Usher or the Castle of Otranto.

And yet, just to tease the audience, in among this timeless urban gothic milieu the characters have 21st century mobile phones (I honestly didn’t notice if these are in the flashbacks too).

For a personal project, there have been a surprising number of hands on the script, even if we discount Messrs. Stevenson, Hawthorne and Poe. Ryan Plato (Wishtaker) is credited as ‘co-writer’ while Ray Gower (Dark Corners) and Mike Lancaster (also associate producer and key grip!) were ‘script consultants’. Don Randles and Steven Hirsch (both Dark Wolf) were the executive producers. 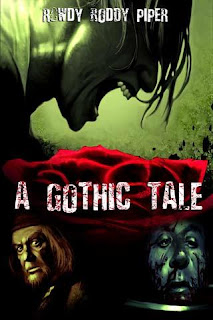 The unbelievably busy James Lacey handled ‘make-up/FX’. Lacey has already worked on another nine films since A Gothic Tale; his many other credits include Automatons, All Souls Day: Dia de los Muertos, Dismembered and a 2008 documentary about Jack PIerce for which he recreated the Mummy. The unpronounceable Daniel Iannantuono, who also scored KatieBird, provides the music once more. Ritter did his own editing.

A Gothic Tale is a deep, almost impenetrable film. No, I couldn’t follow what was going on (nor can I find any reviewer anywhere yet who has even attempted a synopsis) but that is not a negative in this case. It’s a film that make you think, a piece of art onto which one can project one’s own interpretation, while admitting that it will probably never quite chime with Justin Paul Ritter’s own intentions.

I can see this one dividing opinion sharply. I believe that’s a good thing.