William Franklyn has had a long career in film, television and radio, not to mention some of Britain’s best-known advertising voice-overs. I interviewed him in November 2003 when he was recording the part of The Book for the long-awaited third series of The Hitchhiker’s Guide to the Galaxy. 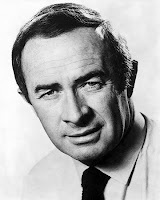 You’re stepping into some big shoes, because if anyone was associated with Hitchhiker’s Guide it was Peter Jones. How daunting is it to take over the role so closely identified with another actor?
"Well, I knew so little about it. And it also happens that Peter Jones was a very close friend of mine. But none of this was something that I was even aware of at the time, because we did other things together. I remember him with great affection because I did a programme on the radio called Just a Minute and he warned me that two of the people on the programme - who will be nameless - would actually try and crucify me."

I’m sure we can work out which two.
"Yes, quite. This is going back quite a while. I think a Freud-ian influence did come into it, and also there was a Williams-type person... Funnily enough, he said, ‘Just give me a look when they start on you and I’ll come in and try and get you out of it.’ Which was very sweet. It was a very kind thing to do, actually. Anyway, we survived it all and I got to know Peter very well.

“I didn’t know this programme intimately until I actually went and bought the tapes and listened to it all. And I thought: Peter is so good - what the hell am I doing, doing this? But we’ve all moved on in terms of time, in terms of audience. What is interesting is: I’ve met a number of people in their late twenties, particularly males, who’ve said, ‘They’re doing that again? I’ve never forgotten it.’ And they remember it so vividly, they can even remember some of the dialogue. So there’s no question that I’m stepping into a new area altogether, which is fun.

“It’s really rather like the first time I was dropped out of an aeroplane: you really don’t know what it’s all about, and when you land you’re so excited that you’re still alive. It’s the same with this really. You start to do it and then you think: I seem to have survived it! And nobody is too horrifying. It’s part of the game."

You’ve heard how Peter did it. Presumably you’re not trying to copy him.
"Not remotely. I think there’s a lot of irony which is one of the things that I always look for because it lightens the heavy and very serious stuff. I’ve just literally heard it once and I don’t even think about that. I’m not a good imitator anyway by nature, so that’s very fortunate, that area doesn’t impinge on what I do."

You’re coming into a team who have all done it before. Have they accepted you as the new boy?
"Oh yes, they’ve been extremely kind and generous. Don’t forget, because all my stuff is solo, when it comes to actually recording I will come in and do all my stuff quite separately without anybody. I’ve been coming to the read-throughs to get the team atmosphere and the spirit of it all, as much as anything." 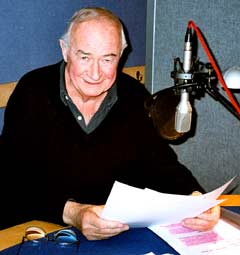 I know Peter had problems sometimes because Douglas Adams had a tendency to write very long lines of dialogue.
"That is your understatement for this year! I can tell you, when you get five-line sentences without a comma or anything, it does take a little bit of verbal strangulation to get it all sorted out so it all sounds like the most natural conversation in the world."

Have you worked with director Dirk Maggs before?
"No, I haven’t. Dirk is very helpful because he says, ‘Let’s try so and so,’ then says, ‘No, it doesn’t really work - do it the way you did it before.’ So it’s all very open-minded between the pair of us. I like him, he can direct me as much as he likes and we just see which seems to work best for the balance. So it’s a good relationship."

And you’re on board for the next series?
"Yes, I believe so. If I get away with this lot, then I’m down to do the next lot too, which we’re doing next year.”