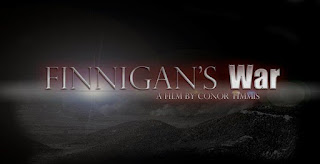 War is not beautiful. War is ugly. Every war ever fought, for whatever reason, in whatever way, between whichever sides, in whatever time and place, has been an ugly thing. That’s the nature of war.

War can be thrilling, war can be exciting: it wouldn’t make such a good subject for films if it wasn’t. War can be honourable, it can be righteous, it can be moral, it can be romantic, it can even be blackly comic. But it can never be beautiful.

So how has Conor Timmis, director of Kreating Karloff, managed to make a movie about war which, in searching for le mot juste, I can only describe as a beautiful little film?

It’s because, although ostensibly a documentary about the Korean War, Finnigan’s War isn’t actually about war. It’s about people. And people can be beautiful. The beauty of the people in this film - though some of them are undoubtedly good-looking old fellas for their age who probably drive the old gals wild on whist night - is the inner beauty of goodness and humanity. It is the great irony of war that while it is so inhuman on a grand scale, down at the individual level, it is full of some of the best that humanity can offer.

So here’s what we have. Conor’s grandfather, John Finnigan, was killed during the Korean War. In 2010, on the 60th anniversary of the start of that war, Conor set out to meet surviving veterans, and the families of those who died in the conflict, and learn their stories. Three years later, on the 60th anniversary of the war’s end, this personal quest has been turned into an hour-long film of which young Mr Timmis should be extremely proud. 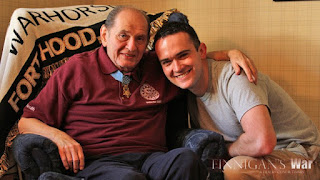 This is a personal quest and a personal film. It starts with Conor’s grandad and progresses to another soldier from the same regiment whose sacrifice is commemorated in the name of a US Navy ship commanded by Conor’s uncle. Conor is there in the interview segments, not obtrusively but giving a human touch to the process of recording these memories. He meets an extraordinary cross-section of ethnic America: men from the only all-black Rangers regiment; the first Chinese-American US Army officer (remember - they were fighting the Chinese); Puerto Rican bikers who commemorate a Puerto Rican unit; the family of a Native American soldier; and a Hungarian-born Jew who survived a Nazi concentration camp, signed up to the US Army in gratitude and five years later found himself in a Chinese POW camp.

Extraordinary stories of ordinary men doing extraordinary things, all told sympathetically and with dignity. In still photos of Conor posing with these men, we can see a genuine admiration on the film-maker’s face, and also the pleasure of these old geezers in the interest that this young man is taking in their memories. There is a sincerity throughout this whole film which one so rarely encounters and which could so easily have disappeared if the picture had toppled into either cloying sentimentality of soulless objectivity.

One particularly noteworthy touch is the use of comic-book artwork, with limited animation, to accompany readings of individuals’ medal citations. Justin Case of gunmother.com supplied the artwork, Mark Hamill supplied the voice. It works brilliantly. Which is a surprise because one would think that comic book artwork - with its connotations of Sgt Rock, or Sgt Fury and His Howling Commandos (or, on this side of the Atlantic, Battle Picture Library and Commando Picture Library) - would cheapen the stories. But it doesn’t. One reason why it doesn’t is because these aren’t gung-ho tales of kicking the Commies’ butts, these are stories of men going above and beyond the call of duty, sometimes paying the ultimate sacrifice, to save their comrades in arms. Though these men took lives, they did so to save lives. That’s the nature of war. Kill or be killed. That’s why it’s ugly. 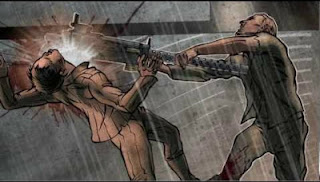 Two things are deliberately (and justifiably) absent from Finnigan’s War. One is any historical context. Conor calls this the story of “the forgotten heroes of an almost forgotten war” and he’s right. Really, to my shame, I know almost nothing about the Korean War. Coming as it did inbetween the morally unimpeachable global behemoth of World War II and the nation-dividing shameful shambles of Vietnam, Korea is overlooked by history. But men fought and died there, far from home. And it’s the men who are the subject of this film. Why they were there - the big story, the macro-tale - is not relevant here. There are plenty of books about the Korean War that will tell you why it started, what happened, and how and why it ended three years later. Conor did the right thing to ignore this: he could only have touched on the notions and ideas, never doing justice to them, and even then it would have bitten into the film’s 56-minute running time.

Also absent, or almost absent, as a result of the above, is any discussion of the enemy. They were Chinese Communists, that’s all we’re told. Only once does one of the veterans recall engaging directly with an enemy soldier, the two spotting each other at almost the same time with the GI quickest on the draw. The Chinese man was old for a frontline soldier, in his forties, and the American recalls asking his corpse “What are you doing here? Why aren’t you with your family?” It’s pretty much the film’s only moment of acknowledgement that every war has two sides, that Chinese men were being sent to fight the Yankees, just as US troops were being sent to fight the Commies. This is an important anecdote: without it, the film could have been justifiably accused of being too jingoistic.

Finnigan’s War is an American film, made with American sensibilities, but of course the perception of the US military - current and historical - is very different outside the States, in terms of both individuals and overall strategies. The flag-waving patriotism of Americans for everything their soldiers do sits awkwardly with the more cynical European view. But the simplicity, sincerity and underplayed, quiet dignity of Conor’s film cuts through any such cultural differences. This is a film which could play well at any film festival around the world and I hope that all programmers of documentary festivals will take a look and consider screening it. 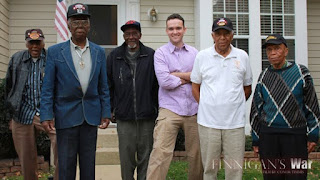 Although this is very much Conor’s personal opus, it is still a collaborative project of course. Mention must be made of sympathetic editing by Gary Fiero (Pickman’s Model) who is also one of four credited cinematographers, and the excellent, subtle music by Scott Keever.

It doesn’t sound much, broken down into its constituent parts: some old guys recalling a war 60 years ago with a few semi-animated interludes. But Finnigan’s War is a beautiful piece of film-making and I am genuinely glad that I was given the opportunity to watch it and write about it.