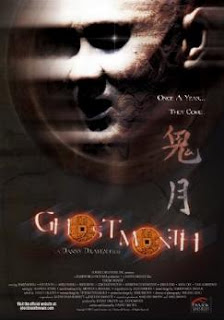 Between 2001 and 2003 Danny Draven directed five features including Hell Asylum (which was pretty good) and DeathBed (which was great). Since his last film, Dark Walker, Danny has been working as an editor, mainly cutting films for David DeCoteau (Ring of Darkness, The Sisterhood, Witches of the Caribbean and House of Usher) and Charlie Band (Decadent Evil, The Gingerdead Man, Petrified and Evil Bong).
Well, now young Mr Draven is back behind the camera with Ghost Month (originally announced as Offerings), a genuinely creepy and slick-looking tale of Chinese ghosts in the hills of Nevada. It’s easy to see how he has progressed in the past four years as this is easily his most professional-looking picture so far. It’s also very spooky.

Marina Resa (Smuggler’s Ransom, One Day Like Rain) stars as Alyssa Barnes, newly employed as housekeeper to a Chinese lady named Miss Wu (Shirley To, who was in a UCLA student project to recreate scenes from Wong Kar-Wai’s 2046; she also play bass) who lives in a fabulous house way up in the hills with her non-English-speaking Aunt Chen (Akiko Shima: Letters from Iwo Jima). Without mobile or e-mail, Alyssa is cut off from the world which is how she wants it because she needs to be where her psycho ex-boyfriend Jacob (zoologist-turned-actor Jerod Edington: Alone, Run) can find her.

Alyssa is a lapsed Catholic but Miss Wu and her Aunt practise traditional Chinese religion and this includes making offerings during ‘ghost month’ to ward away spirits. An isolated location, employers who - though pleasant - converse in another language, strange night-time ceremonies: already we are off-guard, and so is Alyssa. 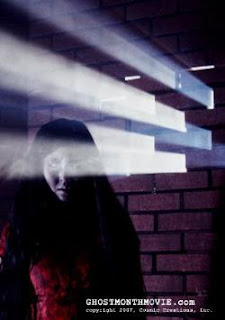 She finds mementoes of of Mei Ling (Anna Lee in flashbacks and photos), the previous housekeeper who disappeared without explanation. She also meets and befriends neighbour Blake (Rick Irvin, a Draven regular who was in Dark Walker, Cryptz, DeathBed and even the Bad Movie Police wraparounds that Danny DP-ed for JR Bookwalter) but then starts to doubt and distrust him. Above all, she starts having visions and hearing voices. Two scary ghosts - a woman with long hair and a guy with a skull-like face - appear separately to Alyssa, each apparition causing her to suddenly find herself trapped in an enclosed space. These dreams or hallucinations, whatever they are, don’t last long but they’re almost as scary for the audience as for the character. Draven directs - and, of course, edits - with a deft hand, letting us see just enough to know that we don’t want to see any more.

Gradually, as Alyssa investigates the house, she starts to unravel the truth about Mei Ling and eventually realises why Miss Wu and her aunt have good reason to ward off spirits.

Ghost Month is big on style, cinematographer Michael King making extensive use of coloured gels (and the properties of 35mm film!) to create artistic but unnerving images, full of shadows (sometimes a few too many shadows, to be honest). There is a constant threat that something will appear briefly in the background or from the edge of the screen and by about halfway through the viewer is barely concentrating on the actors because we’re keeping half an eye on the room behind them. Effective Chinese-influenced music by Danny’s Mrs, Jojo Draven - who shares producer credit with hubby - adds to the gradually building atmosphere of unease and paranoia.

As well as looking and sounding good, Ghost Month has a well-crafted script which brings the characters to life, assisted by uniformly impressive acting. This is a screenplay that has been rewritten and rewritten through multiple drafts until it’s as good as it possibly can be. Unusually for a film made by an editor, there are some deleted scenes (these weren’t on the screener, nor were the bloopers, trailer, commentary and DVD-ROM features, but they will be on the commercial release apparently), I say ‘unusually’ because most editor-turned-directors I know cut the film in their head beforehand and shoot only what they need. Nevertheless, Danny is to be commended for having the guts to remove stuff and keep in only what is needed to tell the story and develop the characters. At 100 minutes, the film is just the right length, with neither obvious gaps nor obvious dead wood.

John Lechago (director of Blood Gnome) provides some excellent visual effects and digital make-up. Also contributing to the sumptuous visual look of the film are costume designer Vivian Fitzgerald (who has made an unusual career progression since Dark Walker on which she was a foley artist!) and production designer Mike Brown (who frankly could be one, several or none of the many Mike Browns on the Inaccurate Movie Database). 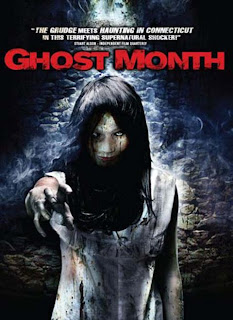 Also in the cast are Erica Edd as the manager of the agency who sends Alyssa to Miss Wu, co-producer Buddy Barnett (also in The Vampire Hunter’s Club and The Low Budget Time Machine) as a taxi driver and Tam Albertson as a ghost. But the biggest star here as far as I’m concerned is Kierstin Cunnington as Alyssa’s best friend Nicole. Cunnington is the lady who was photographed, cut up and animated as ‘Debbie’ in the amazing video that the JibJab boys created for Weird Al’s song ‘Do I Creep You Out’. Has there ever been a cooler thing to have on your acting resume? I don’t think so.

Already a deserved hit at festivals, Ghost Month is terrific film, as stylish as it is spooky, and comes thoroughly recommended.