I met German actor Benno Fürmann at Shepperton Studios in June 2006, on the set of Mutant Chronicles.

Can you tell me about your character?
"To Steiner, it’s really all about the mission. He’s been a soldier most of his adult life. He doesn’t really have anything to hang onto except what he does. The world is ripped apart and I think for once he has a feeling to fight for a good cause. If that would be the last thing he does, it’s worth spending your final days to try to make it a better place for future generations to come. Because that whole thing in general is so screwed up that there’s no hope the way it is."

What attracted you to this role?
"I think mainly the whole genre mixed with the people involved and obviously Simon Hunter flying to Berlin - meeting him and talking about the project got me hugely excited. But me being German, working internationally, I never did any genre/sci-fi/whatever, this kind of adventure that we are on a quest right now. This is a totally new thing to me. I did period pieces, I did drama. I had my stretch in terms of playing in different fields in this profession but sci-fi is just something they don’t do. I don’t even know whether Simon would approve of that: it’s not a sci-fi film per se, but it’s most definitely for me. Just the idea of stepping on a starship being charged by a coal-fuelled engine got me excited and made me want to be part of this." 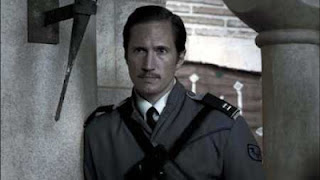 It’s quite an international production. Were they specifically looking for a German actor?
"They were, I think. The way the script came to me is through Ed Pressman who I know from New York. He contacted me and said he would like to pass a script on and we took it from there. I loved it and wanted to meet the director and I’m very happy I did."

Do you have stunts and action sequences?
"Yes, there’s a bit of swordfighting, there’s a lot of firing around. I think I’m going to get the coolest make-up I ever had in a film because I’m going to be half-burned at some point in the movie, so that’s something I’m looking forward to for my showreel. But swordfighting is something I like. I like to do physical stuff, I like to choreograph fighting sequences. In this context it’s great because you’re in the future but you’re fighting with limited resources. You’re fighting with old-fashioned guns that remind you of the First World War. Mutants are, I found out during the shoot, tough creatures to kill so we very much rely at some point on swords. So it becomes almost this medieval-meeting-future kind of quest of fighting in an old-fashioned way. So for me that’s the fun of it."

Have you done other films in the UK before?
"I did do a film called My House in Umbria starring Maggie Smith that Richard Loncraine directed. We shot that in Tuscany and a reshoot of a couple of days with, bless him, Ronnie Barker when he was still with us. So those were my only two days of photography in Britain."

Do you have anything else lined up?
"In Germany I will do an independent picture after this. Most of the stuff we do is to some point independent. Right when I go back, I’m going to do three films back to back, one of them being in France and two of them being in Germany."

You’re obviously fluent in English but what’s it like shooting a film that’s not in your native language?
"It’s more difficult. On the day it’s not, but during the whole production. When you’re acting you don’t want to be concentrating on dialogue. You want to have it in your belly and your heart. It’s a bit of extra work to pound the words where they should sit when you’re doing your thing. But that’s basically all and on the other hand it gives you a kind of distance and an approach that’s a bit more distant. You just have to build a different bridge and that can also be very intriguing and exciting because in the beginning it can be a bit more artificial so it’s fun to go there and make this character your own and make these words your own. I love it. I don’t have a problem working in English.”