Good old Apex Video. They could always be relied on to pick some completely cool but utterly arbitrary piece of artwork and slap it on their sleeves. They were the company who released Al Adamson’s Dracula vs Frankenstein behind a painting of banner-waving armies attacking a futuristic superfortress. For Ghostkeeper (or Ghost Keeper as the sleeve has it) they gave us a hideous monster, composed in roughly equal parts of an eagle, a skeleton and a devil, lunging out of a blood-red sky above Aztec pyramids in a South American jungle.

Not bad for a film about a North American ghost monster which is set high in the Rockies.

Marty (Murray Ord), his girlfriend Jenny (Riva Spier: Rabid) and their friend Chrissy (Sherri McFadden) are exploring on a couple of Skidoos on New Year’s Eve, while the rest of their party, back at some rented lodge that we never see, is preparing for, well, a party. Jenny is serious, intense and brunette, dressed in a blue snowsuit with high waist and flared trousers; Chrissy is blonde, a bit more relaxed sexually and dressed in red. Frankly, they look like 50 per cent of an Abba tribute act. Marty, for his part, is a bit of an arse. Their characters are all established in an opening scene when they look round a remote general store, run by an old guy (played by Les Kimber, who is normally found behind the camera as production manager on pictures up to and including Superman). 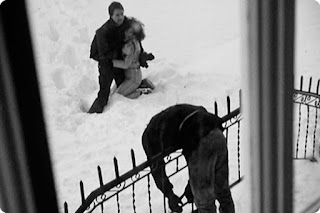 Marty and Jenny’s relationship is a little tense, not helped by the way that Chrissy is flirting with him and the fact that he doesn’t seem to mind it. Just to add extra spice, Jenny is haunted by the fear that she has inherited her mother’s insanity.

Despite the storekeeper’s suggestion to turn back, they explore past a sign reading ‘Private property - keep out’ and find a huge, utterly remote hotel, the Deer Lodge. It seems to be deserted and the visitors book shows that no-one has stayed there for five years - so why is the heating working?

Bad weather and accidental damage to Chrissy’s Skidoo force them to stay the night and they discover they are not alone when Marty is attacked by an old woman (Georgie Collins) whose character is credited only as ‘Ghostkeeper’. She turns out to be living - and possibly working - in the hotel and strangely circumvents questions as to whether anyone else is around, making a mysterious reference to “my boy.”

She shows them to rooms that they can use, but while Chrissy is having a bath she is attacked by a guy with a beard and a woolly hat who is (we can safely presume) the old woman’s son. He drags her, naked, to a distant part of the hotel where she is thrown into a room with a wild-looking individual who may or may not be entirely human - after having her throat cut. The guy in the woolly hat is credited as ‘Danny’ and played by Billy Grove, the wild-looking guy is played by John MacMillan and credited as ‘Windigo’. Neither is ever referred to as such, although an opening caption has told us: “In the Indian Legends of North America, there exists a creature called Windigo... a ghost who lives on human flesh.”

In the morning, Marty finds Chrissy missing, her Skidoo vanished and his own vehicle deliberately tampered with. While he is busy looking for equipment to repair the machine, Jenny is given a drugged cup of tea by the old woman. She comes to in a different room where, instead of wondering where she is, she browses through a book about Native American legends and finds an old newspaper with the headline ‘Mutilated bodies found’. She then escapes chainsaw-wielding Danny, running up to the top of the hotel from where he falls to his death, impaled on railings below.

Jenny begs Marty to leave (through the waist-deep snow) but he seems to have gone bonkers, painting his face with grease and ranting about crazy stuff while holding her tighter than she would like. He then wanders off into the snow.

Returning to the main hotel, Jenny faces a showdown with the old lady who reveals something which explains why Jenny has been hearing faint voices calling her name since she got there, but which otherwise makes no sense. The ending is very weird, very bleak and yet strangely satisfying.

When I say ‘makes no sense’, in fact there is some sense to it. By the time that the 90-minute picture finishes it is fairly clear that Jenny has in fact gone completely loopy. However, much like the main character in Neil Marshall’s superb The Descent, made 25 years later, we are left wondering precisely when in the story what we were seeing stopped being real and started being the product of Jenny’s deranged mind. The implication is that she will take over from the old woman as the Windigo’s ‘ghostkeeper’ but since no-one ever talks about a Windigo we’re left wondering whether the locked-up hairy guy really is the creature of legend or just some mad bloke. Or does he exist at all? 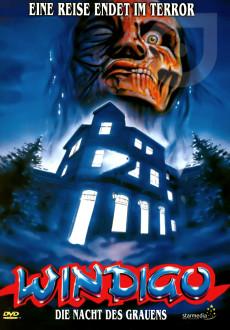 For such an obscure film, Ghostkeeper is strangely satisfying, even on this barely watchable, full-screen video which is a dark transfer of an already dark film. There is nothing silly here, there are some bits of genuine horror (such as the throat slitting), there are no pat explanations or lame attempts at humour, the three main characters are believable, and the last 15-20 minutes is tense and horrific, treading the middle ground between psychological and supernatural horror. It kept me gripped, although I think the sleeve’s claim of ‘SUSPENSE, HORROR and DRAMA in the true Hitchcockian tradition’ may be pushing it a bit.

Given that this was filmed in Alberta I can only assume that the Inaccurate Movie Database has got its facts right for once and that the actor playing Marty is the same Murray Ord who went on to be President of the Alberta Film Commission, location manager for everything from Airwolf to Shoebox Zoo, and producer of Brokeback Mountain!

Writer/director Jim Makichuk is a former news cameraman whose short films earned him a Genie and an Oscar nomination. His subsequent career has mostly been on the writing side, where his credits include the 1999 sci-fi movie Roswell: The Aliens Attack, episodes of Highlander: The Series and the 2002 Gentle Ben telemovie! Co-writer Douglas MacLeod, who is also associate producer, went on to produce a bunch of stuff for Canadian TV. Someone called David Makichuk (brother? father? son?) gets a ‘story consultant’ credit here.

Cinematographer John Holbrook allegedly directed an ultra-obscure 1970s porn/horror picture with the unpronouncable title Sexcula. Mel Merrells gets the possibly unique credit ‘special effects/generator operator’; the ‘special effects’ amounts to one small Skidoo explosion so he would not have needed to leave the generator unattended for very long. Composer Paul Zaza has by far the longest filmography of anyone here, his credits including Murder By Decree, Porky’s, My Bloody Valentine, The Pink Chiquitas and all four Prom Nights. 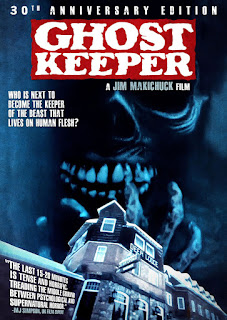 Ghostkeeper is a decent little film, dating from the last days of independent 35mm theatrical releases (it was distributed in the States by New World) before the video explosion. It’s probably the lack of star names (and the fact that it’s Canadian) which has kept the film so obscure because there’s nothing really wrong with it. If it has a failing, it’s that the whole Windigo thing is so tangential as to be barely there. It makes one wonder whether that was tacked on after the fact because, apart from the opening caption and the closing credits, there is nothing to suggest any connection with ‘Indian Legends’ whatsoever. This is a Windigo movie which is almost entirely lacking in Windigos.

review originally posted 8th January 2006
[Unusually for one of my reviews, this one has a sequel over on the Devil's Porridge blog - MJS]
Posted by MJ Simpson at 20:52

Email ThisBlogThis!Share to TwitterShare to FacebookShare to Pinterest
Labels: 1980, Canada