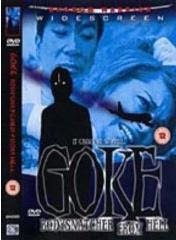 I’ve wanted to see this film for a long, long time so when the screener disc turned up from Artsmagic I was delighted (though not overly surprised as I had compiled the cast filmographies for the disc a few months earlier).

It’s great to see a completely serious vintage Japanese science fiction film. Though I adore all kaiju eiga, the introduction of extra-terrestrials is usually pretty poor in terms of both storyline and design. But Kyuketsuki Gokemidoro is a searing look at the human condition under extreme SF circumstances. It plays like a feature-length Twilight Zone episode and it’s great.

An internal commercial flight crashes in a remote part of Japan. Flying through a blood-red sky and scared by birds hurling themselves to death against the windows, the crew are alerted that there might be a bomb on board. A search of passengers’ luggage turns up no bomb but does reveal the presence of assassin Hirofumi Teraoka (Hideo Ko: Horror of a Deformed Man) who has just killed the British Ambassador. He forces the plane to divert so that when it crashes, they don’t know where they are. A radio report later reveals that rescuers can’t find them and have given up. 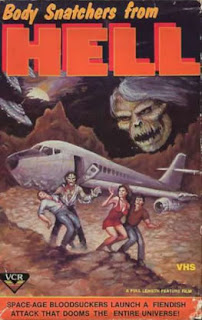 Just before the crash, Sugisaka and his pilot (Hiroyuki Nishimoto) saw a flying saucer. Teraoka now kidnaps Miss Asakura and drags her around the mountain where they discover the alien spaceship. In an iconic image, Teraoka’s head cracks open (Harry Potter has nothing on this forehead scar!) and something nasty oozes inside him. From then on the cluster of survivors gradually disintegrates as they are torn apart by internal squabbling and the outside force of Teraoka who is now some sort of space vampire.

In particular, unpleasant truths are revealed about Mano and Tokiyasu, with the politician coming out of the film as easily the most loathsome individual on the plane. But the construction and subsequent breakdown of the group dynamic is not done simply or obviously and unlikely allegiances are formed and broken at the drop of a hat. It’s a great script, and with the picture clocking in at not much over 80 minutes, a taut and tense one.

The whole film is essentially an anti-war movie, with several blood-red montages of Vietnam War atrocity photos driving home the point. In a twist on the peaceful intentions of Klaatu in The Day the Earth Stood Still, the ‘Gokemidori’ aliens are here because of mankind’s propensity for violence, but to take advantage, not to warn or help. A bleak ending includes an image which will be familiar to all fans of Tim Burton movies,

Many of the crew also worked on another Hajime Sato movie, Golden Bat; the director’s other genre credits include Ghost of the Hunchback, Terror Beneath the Sea and obscure 1960s TV superhero series Captain Ultra (not part of the Ultraman franchise, despite the title). Writer Susumu Tanaka also wrote Golden Bat, War of the Insects and Fist of the Northstar as well as working on the TV series Inazuman Flash, Space Sheriff Gavan, Battle Fever J and Mazinger Z. Cinematographer Shizuo Hirase, who lights the interior of the plane with some evocative filters, also photographed War of the Insects and the delirious The X from Outer Space, while production designer Tadataka Yoshino‘s other work includes Sure Death.

Artsmagic have released a nice subtitled widescreen print on their Shadow Warrior label, complete with bio-filmographies and an unsubtitled trailer which includes some footage of the plane crash (typically excellent miniature effects) which is missing from the film itself. Goke - Bodysnatcher from Hell is an excellent, gripping, scary, thought-provoking movie which, not unexpectedly, belies its cheesy international title.