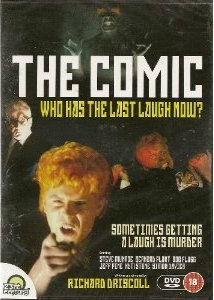 I am about to damn this movie with fainter praise than has ever existed in the history of film criticism: The Comic is not as bad as Kannibal.

That is not to say it’s any good, or even adequate. It is, in point of fact, shite. It is boring, pretentious, completely incomprehensible, poorly acted and packed with godawful 1980s haircuts. In short, it’s like watching an amateur remake of a Spandau Ballet video.

But this debut feature from the man who might reasonably described as the British Ed Wood scores over his later picture in a few important ways. It is at least an original idea rather than a shameless rip-off of two successful Hollywood movies. The music isn’t bad (but, as they say, you don’t come out of the cinema whistling the - oh, hang on, that doesn’t work here, does it?). Most impressively, Driscoll himself stays behind the camera in this one and there is no sign of Lucien Morgan, the officially recognised Worst Actor in the World.

Nevertheless, this is a bad film.

Steve Munroe, a wooden actor saddled with a ginger mullet so unappealing that it suggests he was really bad in a previous life, stars as Sam Coex, a wannabe comedian (Munroe followed this with bit parts in Robin of Sherwood, Casualty and The Bill and a role in the Driscoll-produced serial killer biopic Cold Light of Day). But the local club already has a regular comedian on its books, Joey Myers (Jeff Pirie, who had recently spent two years as Eddie/Dr Scott in The Rocky Horror Show; he is credited as Jeff Perrier in the closing credits and Jeff Pine on the sleeve of the DVD). Frustrated, Coex kills Myers late one night and buries his body. Then, when the comedian fails to show the next night, Coex goes on instead and is a hit.

He becomes involved with a prostitute, Anne (the surely anagrammatical Berdia Timimi), who has some sort of secret agenda although it’s never made clear what that is. He also gets picked up by Joey Myers’ old agent Stan (Bernard Plant), who charges a staggering 80% fee for booking him into various dives. As his career progresses, Coex is haunted by visions, often involving the zombified return of Joey Myers.

Now here’s the odd thing: this all happens in a dystopian near-future even though this has no relevance to the plot whatsoever. Our only clue is an opening narration by a blonde woman, to camera, which seems to be based on the opening of Dune. This actress (who is presumably the Kim/Kym Stone credited in the opening titles but not at the end) tells us that in this world “people don’t live, they merely ... exist.” We then have a shot of a soup kitchen where a small squad of goose-stepping, jackbooted soldiers/cops march in and beat up a man - apparently for daring to crouch under a table.

The DVD sleeve tells us: “In a fascist near future Britain has become an oppressive police state, the drugged population is entertained by ‘the Comics’ who keep a smile on their faces while everything gets worse.” Precisely none of this comes across in the movie, even if you have read the sleeve and are actively looking for this stuff.

Instead, we get Sam’s rise to fame and a highly speeded up social life. When Anne tells him she is pregnant he asks her to marry him, on condition that she gives up the drink and drugs, although there has been no suggestion up to that point that she indulges in either. They have a little girl - there is a hilarious silhouette shot of a nurse holding an obvious doll up by its leg and smacking it - and before you know it his daughter is three and his wife is looking for work.

“But how can I help?” asks Stan when Sam asks him for a favour in this regard. “I’m an agent - I just find jobs for people.” Actually, Bernard Plant has several unintentionally great lines, my other favourite being “This is a hell of a place to meet,” as he settles down next to Sam in what appears to be a relatively quaint English pub.

The nightclubs themselves are mostly just collections of tables with people sitting at them; there is no attempt to integrate audience shots with shots of Sam, Joey or anyone else on stage which were very obviously filmed separately. Even the very limited laughter and applause (the paucity of which matches the material on offer, though I don’t think that’s intentional) doesn’t connect in any way with the ‘performance’ footage.

Despite what it says on the sleeve, the people in the audiences appear relatively affluent, rather than being a subjugated lower class kept in their place by cheap entertainment. There is no suggestion that the people in the soup kitchen ever get to visit a club. I get the impression that the combination of cabaret and stark class division is meant as an allegory for Weimar Germany but I could be wrong. Had The Comic been any good it could actually have served as a strangely prophetic look at Britain 20 years later, with a populace kept distracted by mindless entertainment while a right-wing regime dismantles democracy around them. But it’s shit so it doesn’t.

There is also some sort of subplot about a local bigshot named George Ellington (Vass Anderson, who was also in Kannibal) who waltzes off with Anne, who is some sort of gold-digger. Also, for some reason, everyone travels around in vintage cars (or in one instance, a horse-drawn carriage). ‘For some reason’ is a phrase that seems appropriate to most aspects of this film, although not as appropriate as ‘for no reason whatsoever’.

Sam’s nightmares are some of the worst-written, worst-directed, just plain worst parts of the film, although towards the end it’s difficult to tell one thing from another (though not in a good, enigmatic way; more in a bad, incompetent way). He even says to someone at one point, “It was all a really bad dream.” Ah, but if only it was... There is a particularly funny sequence not too far into the film where Sam appears as a sort of demon, body-painted green and with enormous furry eyebrows matching his carrot-coloured thatch.

It is absolutely impossible to follow what is meant to be going on in The Comic. Better minds than mine have tried and failed. Perhaps Richard Driscoll knew what he was trying to do but he completely failed to communicate that to the viewer. Which is in contrast to Kannibal, where we could all see precisely not only what he was trying to do but also how incredibly badly he was doing it

So, apart from Driscoll, who else has this film on their CV as a guilty secret? The cast includes Bob Flag, who was Dennis Nilsen in Cold Light of Day and was also in Calendar Girls, 1984 and Eat the Rich; Gary Twomey, who was in Robin of Sherwood and Taggart; Joy Lale, who subsequently became script editor on All Creatures Great and Small, then producer on Between the Lines and Ballykissangel and then died in a car crash aged 30; and Eddie Blackstone, who is now half a cabaret act called Tjay and the Bear. Simon Davies (surely not the Blue Peter presenter?) is quite dreadful as the club compere.

Cinematographer Alan Trow started as a stills photographer and went on to a busy career as DP on such movies as Xtro II, Project Shadowchaser I and II, Monolith, Cyberjack, Grim and Dragonworld. Special effects are credited to Chris Tucker who previously worked on Star Wars, The Boys from Brazil, The Elephant Man, Dune, Monty Python’s The Meaning of Life and the unjustly under-rated vampire picture Barry McKenzie Holds His Own.

The Comic was famously booed off-screen at its one British theatrical outing and subsequently surfaced very briefly on video. Twenty years later it surfaced on DVD courtesy of 23rd Century, a ‘company’ whose extensive range of bootleg films was on sale from pound shops across the land. Normally I deplore the purchase of bootlegs but in this instance my feelings are different. Given that out of my quid has to come a profit for the retailer plus distribution and manufacture costs, the people behind 23rd Century must make about tuppence ha’penny from my purchase. More to the point, I think that Richard Driscoll films are ones which can be bought on bootleg with a clean conscience because if any money went to the film-maker it might encourage him to make more of his rotten films.

review originally posted around 2005
Posted by MJ Simpson at 20:51