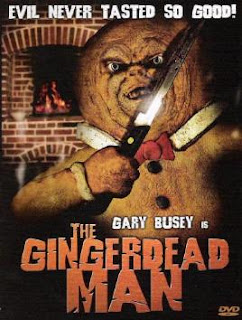 This is what we’ve been waiting for. This is Charlie Band back up to speed. Decadent Evil had its moments but was, frankly, a bit disappointing; Doll Graveyard was fun. But The Gingerdead Man is a hoot.

The basic structure is off-the-shelf: a small cast, in a single location, threatened by something or somebody. But even before we get to the something or somebody, this movie scores points for originality. Come on, what was the last film that you saw which was set almost entirely inside a bakery?

In a prologue we see gun-toting psycho Millard Findlemeyer (Gary Busey) robbing a diner. He has already killed the waitress and proceeds to shoot two thirds of the lone family cowering under a table (dad Newell Alexander, who was Sam Beckett’s father in the pilot episode of Quantum Leap, and son James Snyder). The daughter, Sarah (Robin Sydney: The Lost), he only injures because he doesn’t want to shoot an unarmed girl but his mother always told him to finish what he started.

Sarah’s family runs Betty’s Bakery in Waco, a family business which just scrapes by. A couple of years on, Sarah is holding the business together helped by her alcoholic mother Betty (Margaret Blye: The Entity) and employees Julia (Daniela Melgoza) and Brick (Jonathan Chase: 7eventy 5ive) who has a sideline as an amateur wrestler and carries a torch for Sarah. But competition is looming in the form of a soon-to-open large bakery across the road, which is described as being part of a major chain although it seems to belong solely to stetson-wearing Jimmy Dean (Larry Cedar: Demonic Toys, Pinocchio’s Revenge) who wants to buy out the competition. 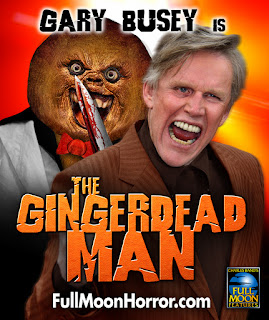 Dean dotes on his selfish, spoiled daughter Lorna (Alexia Aleman) who was recently voted Miss Pretty Face of Waco. Lorna sneaks into Betty’s Bakery at night, when Sarah is the only occupant, and releases a rat with the intention of having the establishment closed down on health grounds. Following her inside is her bit-of-rough, simple-but-honest boyfriend Amos (Ryan Locke: Supercross) who knows he’s being used and has some sympathy for Sarah and her family.

Now, here’s where it starts to get weird. In fact, Charles Band admits in his introduction to the Making Of featurette that this is possibly the weirdest ‘monster’ of any of his films - and that’s saying something, but he might actually be right. Sarah is baking a large gingerbread man as a test piece for some new gingerbread mixture - but unbeknownst to her that mixture contains the ashes of none other than Millard Findlemeyer who was recently executed in the electric chair; wardrobe supervisor E Dee Biddlecombe (The Phantom Eye, Dinocroc, Doll Graveyard) appears briefly as Findlemeyer’s mother who engineers her son’s supernatural revenge. Millard Findlemeyer, it transpires, is back to finish what he started by killing Sarah - and anyone else who gets in his way. And he is doing this through reincarnation as that gingerbread man.

We’ll give you this one, Mr B. Compared to all those killer puppets and flying disembodied heads, this is really, genuinely weird.

There follows a series of set pieces as Sarah, Lorna and Amos try to escape the homicidal cookie. Betty and Julia both return to the bakery and are attacked, the latter being turned into a human cake, smothered with dough (with prominent breasts and glacé cherries for nipples!) and left in the oven. When rescued, her all-white appearance and the way that her flour-streaked hair is sprayed out around her head makes her look a little like the Bride of Frankenstein although I’m not sure how deliberate that is.

Lorna’s father also returns although he doesn’t last long as he is run over by the killer biscuit (yes, he drives a car!). Eventually Brick turns up and defeats the threat by - well, how would you ‘kill’ a gingerbread man? Exactly! But this only leads to more trouble...

Throughout all this, Busey has a ball as the voice of the Gingerdead Man, who wisecracks his way through the various killings and attempted killings. The character is mostly represented by a series of puppets, built by industry veteran John Carl Buechler and operated by Mark Andrews. There is also a Buechler-built full-size suit (Kyle Lupo is the hapless soul inside) but to be honest I didn’t notice whether this was actually used. Certainly the revelation of the suit’s existence in the Making Of was a surprise to me as I assumed I had been looking at a puppet the whole way through.

The Gingerdead Man has ‘franchise’ written all over it and the title character has the potential to become a cult comedy-horror icon along the lines of Chucky or the Leprechaun. And how long can it be before we witness The Gingerdead Man vs Demonic Toys or Puppet Master vs the Gingerdead Man? Hmm? 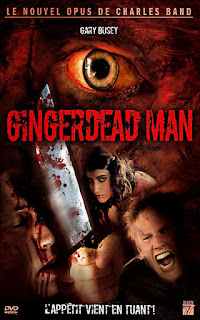 The cast all acquit themselves well and Band keeps the tension going in the second half which is when the killer cookie is let loose. The only major ‘huh?’ moment is when Julia and Betty are being attacked; the bakery just doesn’t look a big enough establishment that the others would not be aware of this. But on the whole, the action and characterisation is fine.

The 18-minute Making Of (directed, as usual, by associate producer Jethro Rothe-Kushel) includes some footage from a test-reel for this project shot a few years ago by actor/effects man William Butler (actor in Ghoulies II, Friday the 13th Part VII, Buried Alive, Texas Chainsaw Massacre III, Arena and the Tom Savini Night of the Living Dead remake; effects/make-up work on Eliminators, From Beyond, Curse IV and Cellar Dweller; director of various Power Rangers episodes). Butler’s version featured a fully CGI-ed Gingerdead Man who looked a little like the Pilsbury Doughboy but with bigger and sharper teeth.

A script seen briefly in the Making Of carries the credit (for those who bother to freeze frame and check) ‘written by William Butler, revised by August White’ which means that Butler has asked for his name to be taken off this and has opted instead for the pseudonym ‘Sylvia St Croix’ (the name of a talent agent character in the stage musical Ruthless, according to a quick Google). August White’s real identity is Domonic Muir, writer of Critters - which explains why one or two sources who got their info mixed up credited the Decadent Evil script to ‘Domonic White’.

Busey must be one of the busiest men in Hollywood with eight other movies and a mini-series listed on the IMDB for 2005. Among his previous fantasy/horror credits are Frost: Portrait of a Vampire, A Crack in the Floor, Universal Soldier II, Predator 2 and Silver Bullet. He comes across in the Making Of as a nice guy and a professional jobbing actor. 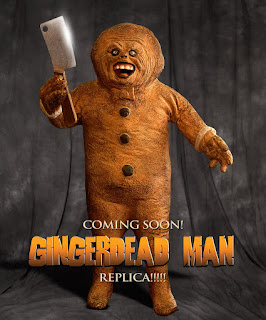 The real star of the featurette however is Jonathan Chase who very obviously had an absolute blast on this movie and plays up to Rothe-Kushel’s behind-the-scenes camera for all he is worth. He may not be on-screen as much as some other cast members, but Brick is a cool role for any actor plus he gets to wear some groovy prosthetic make-up in the finale. Also briefly interviewed - and this must be a first, though it is undeniably appropriate - is caterer Joanne 'Trixie' Sullivan.

The DVD also has the usual plug for Full Moon toys, a few bloopers and the same selection of trailers that were on the Doll Graveyard disc. It goes without saying, by now, that the actual film runs only 60 minutes and is followed by eleven minutes of glacially slow credits.