The Ghost Train is basically the British equivalent of The Bat or The Cat and the Canary, a creepy story derived from a stage play, in which a group of people find themselves in a creepy location menaced by an unseen threat, possibly supernatural but ultimately revealed to be merely criminal. And just as Hollywood shoe-horned Bob Hope into The Cat and the Canary, Gainsborough Films stuck ‘Big-Hearted’ Arthur Askey into this version of The Ghost Train.

A group of rail passengers find themselves stranded in the waiting room of an isolated station, having missed their connection. When the station master is unable to persuade them to leave - it’s bucketing it down outside and the nearest village is miles away - he warns them of the local legend of the ghost train, and how all who see it perish. Later, a strange couple turn up out of the blue, the man claiming that his sister is an escaped lunatic while she protests her innocence and begs the disparate group to protect her from her brother.

Those waiting in the waiting room include drippy couple Herbert Perkins (Stuart Latham, who was in a 1939 TV version of The Tell-Tale Heart) and Edna Hookey (Betty Jardine), who are to be married the next day; teetotal spinster Miss Bourne (Kathleen Harrison: Mrs Huggett in the Huggetts films and radio series) and her pet parrot; booze-sozzled Doctor Sterling (Morland Graham: Whisky Galore!); arrogant cricketer Richard (RG) Winthrop (Peter Murray-Hill: Bell-Bottom George) and his charming cousin Jackie (Carole Lynne, who apparently made only one other film). Then there’s music hall comedian Tommy Gander (Askey) and suave Teddy Deakin (Richard ‘Stinker’ Murdoch), both of whom are enamoured of Miss Winthrop. Askey and Murdoch were huge stars in Britain at this time on the basis of Band Waggon, the first ever BBC comedy series. This was their fourth film together in two years.

It must be said that, much as I enjoy Arthur Askey’s comedy, he is spectacularly irritating in this part, but deliberately so. He is endlessly cracking weak jokes, his cheery face falling when he sees how little reaction he gets, and constantly dodging the entirely justifiable annoyance of Winthrop and Deakin. Still, there’s some good visual comedy, as when Askey/Gander tries to fill a tea-cup with water using a water tower pipe in a rainstorm. Essentially Askey is playing himself, slipping in some of his catchphrases (“Ay thangyew!”) and referring to himself as ‘Big-Hearted’ Tommy. 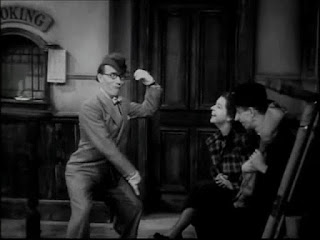 The Ghost Train was written by Arnold Ridley - yes, Private Godfrey from Dad’s Army, when he was a young man - and is packed with red herrings and diversions. Ridley’s original play script was adapted by Marriott Edgar, JOC Orton and Val Guest (later director of The Quatermass Xperiment, The Day the Earth Caught Fire etc.). All three had written the bulk of Will Hay’s classic comedies, including Oh Mr Porter! - which was loosely based on The Ghost Train. Orton later co-wrote the early SF comedy Time Flies. Director Walter Forde is one of the forgotten greats, a former silent comedian who in his time was a serious rival, as far as British audiences were concerned, to Chaplin and Keaton. He also directed the 1931 version of Ridley’s play, starring Jack Hulbert and Cicely Courtneidge, as well as a previous Askey/Murdoch comedy, Charlie’s Big-Hearted Aunt.

Interestingly, the dialogue actually pinpoints the exact night that the action takes place, 22nd January 1940 - 43 years to the day since Queen Victoria’s Diamond Jubilee. In deference to wartime concerns, the ‘ghost train’ turns out to be a front not for smugglers but for Nazi-sympathising gun-runners.

The film was shot at a studio in Shepherd’s Bush in November and December 1941, when the London Blitz was at its height. Consequently, Askey and most of the cast lived permanently in their dressing rooms, within easy reach of the studio’s air raid shelters. So far as I can tell, the only surviving member of the cast is Carole Lynne, who subsequently packed in acting to become Lady Delfont! Askey went on to make a few more comic horrors on TV. His 1956-58 series Before Your Very Eyes featured a Frankenstein sketch in one episode (16th December 1957) and a spoof of House of Wax in another (23rd March 1956) using figures borrowed from Madame Tussaud’s. A 1960s series of comic playlets, Arthur’s Treasured Volumes also included a horror episode, entitled ‘The Curse of the Bellfoots’.

This big screen version of a periodically revived theatre classic is good fun for those of us who enjoy 1940s comedy, but will be of only academic interest to horror fans who lack a penchant for wartime whimsey. It only just scrapes into the horror genre by virtue of the ghostly legend behind which the smugglers/gun-runners hide their criminal activity. Finally, viewers are advised not to think about the plot too closely: with the revelation that almost the whole village is in on the nefarious goings-on, why go to all the trouble of staging disappearing dead bodies, etc. to frighten the passengers, when it would have been so much easier to simply find a bus or van and transport them away from the station?

review originally posted before November 2004
Posted by MJ Simpson at 21:15