A Hand to Play 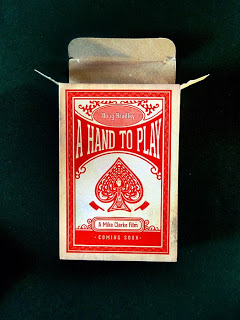 There’s not really a great deal to say about A Hand to Play. It’s a nicely produced little short: twelve minutes long, one basic location and essentially a two-hander. It doesn’t, in all honesty, go anywhere or do anything particularly interesting or original, but it’s well-made both artistically and technically, including particularly good sound design (by James Rackham and Andrew Layfield).

Doug Bradley carries the film as mob boss Mr Trent, with Phil Gwilliam (The Superhero) as Joe, the young man who has crossed him. There are three non-speaking henchmen watching them. Most of the film is Trent explaining, in calm and measured tones, what the situation is, although Joe is fully aware of the situation, thank you very much. A red flag in any script is lines beginning “As you are aware...” because they signal an infodump: tell don’t show. I would really rather have found out about the situation more obliquely, and in a way that told us more about the characters, neither of whom has any real depth.

The film’s trailer and title suggest that it is about a card game to decide Joe’s fate but in fact this only comes in right at the very end and is simply pick a card, highest card wins. I found that disappointing. I was expecting the ebb and flow of a card game - whether that might be poker or whist or happy families - to shift the balance of power back and forth between Trent and Joe, illuminating their characters and throwing a light onto their personal/professional relationship. But there’s none of that.

Curiously, there is some stuff near the start about a threat to Joe’s family which seems bolted on to the plot. It’s set up then immediately forgotten and has no connection with the actual decisive card game bit at the end. That’s the sort of dangling plot thread that occurs far too often in features (of whatever budget level) but it’s odd seeing it in a film running less than a quarter of an hour because the brief running time makes it even more evident. 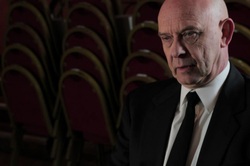 There is also a final twist which is kind of obvious. I mean, I’m hopeless at spotting twists and even I saw it coming.

So while there’s not a great deal of story or character here, we can admire Bradley’s typically fine performance as the sociopathic Trent, and Gwilliam does a good job of conveying the fear of his situation, even if the one thing we learn about Joe shows us that he’s not a particularly nice bloke either, immediately losing us any sympathy for his plight.

Mike Clarke’s direction is professional and well-handled, as is his cinematography. Chris Cronin, director of comedy horror short Working Title, handled the editing. Joel Catchatoor composed the score. Final note: the end credits are slick and fancy but slightly let down by a misspelling of hair/make-up artist Zoe McCaffrey’s name.