After watching David Bourke’s Danish indie feature Last Exit, I felt similar to how I felt after watching Cronenberg’s Crash. It’s not that there is any real stylistic or thematic similarity between the two, it’s just that in both instances I thought: ‘That was very good and I’m glad I’ve seen it, but I don’t really want to ever see it again.’

Last Exit is a grim, grimy, rather unpleasant look at the underbelly of Copenhagen, without a single likeable or sympathetic character - and I think it’s meant to be like that.

Morten Vogelius stars as Nigel, of English parentage but raised in Denmark, who is now living in Copenhagen after several years in the UK. Though his background is not gone into in any detail, he evidently owes a considerable amount of money to various parties and has an ex-girlfriend with a young son. Nigel has sought temporary relief from his responsibilities by moving to Denmark with his Danish ‘wife’ Maria (Jette Philipsen, whose name is unfortunately misspelled on the poster and curiously omitted from the cast list on the film’s website). He has a penchant for porn, she has a drug habit and they live together in a small flat with the lowest ceiling I have ever seen,

Seeking some form of income, Nigel meets a one-eyed stranger named Tobias (Erling Eliasson) in a bar who recommends him to a mysterious figure known only as ‘The President’. This turns out to be a scary, bald gangster (Peter Ottesen) whose mood swings between taught politeness and brief fury. He has two pet thugs, hulking Scandinavian ‘Full Force Finn’ (John Kelleher) and Latino weasel Pedro Rodriguez Iguana (Micah Epstein - surely not the same actor who was in the awful Numb?). When Nigel realises quite how much pain these chaps can inflict with a teaspoon (yes, a teaspoon: bear in mind how many eyes Tobias had...) he also realises that just by coming to The President’s office and speaking to him, he is dipping his toe into murky waters. 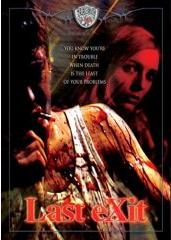 The President has a young woman named Tanya (Gry Bay, voted the 97th sexiest woman in the world by the readers of Danish FHM) also working for him, who is ‘assigned’ to Nigel and begs him to go to bed with her. He resists as long as he can, even though his marriage to Maria, which seems to be one of convenience that enabled him to move to Denmark, has become loveless and bleak. But eventually he gives in.

There is no real nudity in the film apart from the occasional flash of tits but there is a terrific love-making scene where Tanya and Nigel are both slightly high and the director projects various images onto their bodies. Very clever, stylish and effective.

Nigel’s first job for The President is simple: storing 50 boxes of dirty videos in his flat, but he mucks this up - or at least, The President tells him he has mucked it up - and each successive job drags him further and further into the seedy, sleazy underworld. However, as we learn about his abandonment of his British family and get hints at his not entirely legal past, it’s difficult to have any sympathy for the character. Eventually, he becomes involved in death and murder, not all entirely of his own doing.

There is one scene that completely baffled me, when Nigel is trying to get rid of incriminating evidence by cycling around Copenhagen, putting plastic carrier bags into widely space litter bins. As he is about to put the last bag into a wheely bin, he sees that there is a girl in there (it’s not clear if she’s dead, drunk or what). He then cycles back along his route, collecting all the carrier bags, and disposes of the evidence elsewhere. That made no sense.

The character’s downward spiral continues but the film seems to finish just short of an ending. There’s no climax or even an anticlimax: things escalate (or deteriorate, depending on how you look at them) and then everything just stops.

Providing some sort of subplot to, or commentary on, all this is a Scottish dope-seller named Jimmy (Nicholas Sherry) who talks at great length, spouting pseudoscientific nonsense about the meaning of it all and humanity’s place in the universe. While most of the characters are repellent (apart from Maria, whose drug addiction is never really explored and who makes an effort at one point to try and turn her and Nigel’s lives around), Jimmy is just massively, massively irritating and hearing him drone on his existentialist stoner claptrap is like being stuck with the most boring drunk person at an otherwise interesting party.

When we first meet Jimmy he hales Nigel by name, even though Nigel has never met him before. This, together with The President’s deliberate attachment of Tanya to Nigel, suggested some sort of conspiracy but in fact Jimmy’s role - in the sequence of events and in the film itself - is never explained and if Tanya is some sort of honey trap that doesn’t come across at all as The President seems to take no interest in her relationship with Nigel after putting the two together.

The film’s look is very rough and basic, mirroring its themes. Although there are too many effects for this to count as a Dogme movie, it does seem to use available light a great deal, there is a lot of handheld camerawork and the sound quality is sometimes a little poor. Where the film does score a lot of points is in the editing which is excellent. The publicity calls this ‘a film by David Bourke and André Moulin’ and both are credited as editors. (They also share the ‘camera operator’ credit while Moulin gets sole credit for cinematography and art direction.)

The acting is mostly okay, possibly because this is a Danish cast working in English (speaking a foreign language is not the same as acting in it). A few brief scenes, when The President loses his rag, are in unsubtitled Danish which is a brave and sensible move. A soundtrack of indie music, much of which sounds (to my ignorant ear) a bit like Goldfrapp, fits the visuals well but the film mercifully stops short of falling into the ‘90-minute music video' category that entraps so many indie movies nowadays. 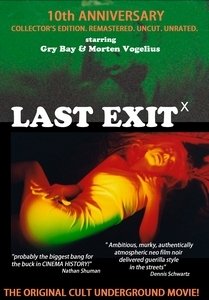 There’s nothing wrong with Last Exit. I think it achieves what it sets out to do very well. I’m just not overly keen on what it sets out to do. It left me feeling dirty and in need of a shower, and because I felt no sympathy for anybody in the film, I wasn’t bothered by any of their suffering, most of which seemed to be brought on by their own greed and stupidity. As a study of the bottom level of life in Denmark, I guess this works but it’s not quite thrilling enough to be a thriller, not quite dramatic enough to be a drama, so I’m unsure what it is.

It’s a well-made, credible first feature but I would be lying if I said that I enjoyed watching it. A few other reviews have referred to the film as having elements of black comedy but that didn’t come across to me at all (unless they were referring to the deeply irritating Jimmy). I found the film to be unremittingly bleak and pessimistic to the point of nihilism and I assumed that was the intention.

Last Exit is currently available in Germany through a distributor called Cult Movies and a US release is planned.