I interviewed composer Richard Wells about his work with Jake West in October 2005. He subsequently also composed the score for Mutant Chronicles.. 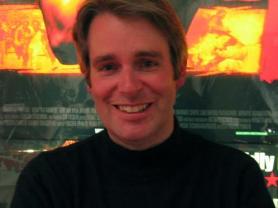 How did you first get to work with Jake?
“I first worked with Jake on the Bitmap Brother’s cult computer game Z. We didn’t meet but Jake did the storyboards for all the animations and myself and Dave Punshon wrote the music.

“We next worked together on a game called MIA (Missing in Action). Jake wrote and directed all the cut scenes using real actors and real sets - something quite unusual for a game at that time (c.1996) - and Dave and I scored the music for them. They were all rather melodramatic as I remember. On the strength of this Jake asked me if I would score his up and coming debut feature Razor Blade Smile. We met, had a beer and discussed styles of music and Jake played me a few tracks he liked and then I went away and ignored most of his suggestions and did my own thing. Anything Jake did not like we changed but as far as I remember we changed very little and just modified a few cues.”

When he approached you about doing Evil Aliens, what sort of brief were you given for the music?
“As far as I remember there was very little briefing for Evil Aliens. Jake showed me a rough cut with some temp music on it, some of it my own demo for Evil Aliens. The only scene where he was specific was the farmer’s stand off with the aliens which was shot as a classic Sergio Leone western stand-off and we both decided we would score the farmers as Leone gunslingers. Otherwise I was pretty much left to do my own thing again.”

From your point of view as composer, what are the biggest differences between Razor Blade Smile and Evil Aliens?
“We couldn’t afford a live orchestra on either film so the decision was taken in both cases to write a hybrid score with orchestral elements, synth elements and guitars. Despite this I think the end result is quite different in both cases. Most of the RBS score revolves around two melodic themes for the main characters Lilith and Sethane. Lilith’s theme is used far more than any of the themes in Evil Aliens, mainly because Evil Aliens is more of an ensemble piece. Therefore there are more themes or motifs for the different characters. Razor Blade was a very melodic score whereas Evil Aliens is based around different clusters of notes for the aliens and humans. “Jake had promised to come around whenever I needed him but due to the tight post production schedule he only made it over twice and we only changed two cues. Everything else came out right first time which was fortunate as we only had five weeks to do it in. I remember saying it would be impossible for me to write, play and mix the soundtrack in this time but in the end I was the only one of the post production team who finished on time, after many late nights. The project was great fun to work on as Jake is a very decisive character; when he says the picture is locked it really is! Also he is very encouraging and trusting and allows people lots of space to be creative which brings the best out the people he chooses to work with.”

What sort of balance were you aiming for between 'horror music' and 'comedy music'?
“I don’t really do comedy music, although there are a couple of moments which I suppose you could describe as comedic: the puddle scene and Gorman’s tantrum in the field. Because there is so much comedy in the film there wasn’t really any need to write comedy music as such. So most of the time we were writing horror/action or emotional music, some of which was a bit melodramatic and may have got a laugh because of this. Obvious example: Gorman running into the crop circle. More a case of absurdly inappropriate music than comedy music which works because it goes completely against the grain. Gorman thinks this is his big moment, he has found the aliens and as he loves aliens I thought it would be funny to give him a hugely romantic/heroic theme, quite inappropriate as he is a complete geek. It turned out to be one of my favourite musical moments.” 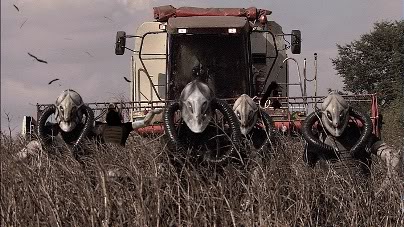 What are you thoughts on the inclusion of the Wurzels on the film’s soundtrack?
“I think the Wurzels were an inspired choice for the combine harvester scene. Who other than Jake could have dreamed that one up? Funnily enough the guy who helped me mix some of Razor Blade Smile also mixed the original Wurzels track! So there is a connection there, even if he won’t admit it! He shall remain nameless or his career may be in jeopardy!”