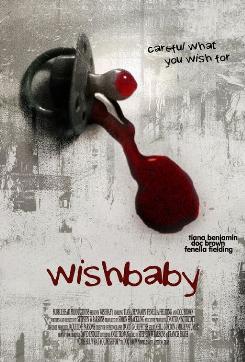 Wishbaby is a powerful, original, mesmerising film which may, I suspect, be seen in retrospect as one of the core titles of the British Horror Revival. An initial viewing suggests that it could be important in defining the subgenre in the same way that The Last Horror Movie, Shaun of the Dead and 28 Days Later are.

EastEnders’ Tiana Benjamin (also in Harry Potter IV) stars as Maxine, a 15-year-old black schoolgirl from a rough background. With no father and an absent mother, she lives with her older (half-?)brother Colin (rapper/comedian Doc Brown) in a squat in an empty office building. Men climbing the stairs to visit the Russian pimp on the floor above occasionally mistake her for a whore. Colin is a basically honest guy, holding down a job as a motorcycle courier and looking out for Max, although he’s hooked on meth.

Maxine inhabitants the world of today’s urban teens, the sort of environment where phones are routinely passed around to show happy-slapping videos. She doesn’t always attend school, sometimes bunking off to hang around the local ice rink, and she is resentful of the social workers who (as she sees it) interfere in things. But Max has a sense of moral values, so when she and her friend Jeanette (Leona Ekembe) see four boys attacking an old lady in a subway, she chases them away and the two girls help the old lady home. 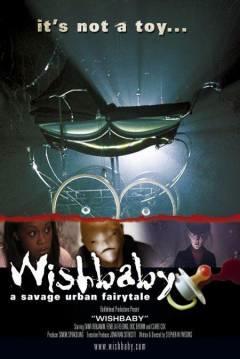 Sometimes films stand or fall on the strength of one casting decision and in this case the film stands proud because casting Fenella Fielding in this role - Eve - was a stroke of genius. She is absolutely perfect. Now in her mid-seventies, she retains her slightly husky, breathy voice with its perfect diction and she emanates exactly the air of faded, genteel oddness that the part requires. Not eccentric as such, not batty, in fact slightly unnerving. She could have gone over-the-top, she could have been a descendent of Carry On Screaming’s Valeria Watt but rather she underplays the whole thing wonderfully and if this role can be related to any other in her career it’s actually (and bizarrely) Dougal and the Blue Cat that springs to mind.

In that once-seen-never-forgotten theatrical spin-off from The Magic Roundabout, an uncredited Fielding supplied the voice of an unseen being who goaded and coaxed the titular azure feline Buxton in his efforts to take over the garden by first flattery and then force. No-one who has ever seen Dougal and the Blue Cat can be left in any doubt that it’s an allegory for Naziism and Fielding’s cultured, coercing tones - serious, even sensual - are a major part of the adult subtext within that children’s film. When you realise or discover that she also provided the uncredited voice of the Village’s public address system in some episodes of The Prisoner, it adds even more layers to her role in Dougal and the Blue Cat. And hence, somewhat circuitously, to this one.

Her stand-out Carry On role may mark her in the cultural zeitgeist as a kooky vamp but in fact she can be creepy without being kooky (and mysterious without being ooky). She is simply magnificent in Wishbaby, a stand-out performance in a uniformly excellent cast. 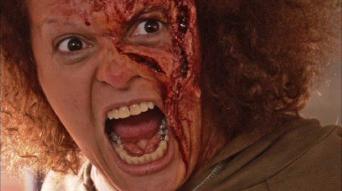 The thing is this: the reason that the youths attacked Eve was because she was pushing an old-fashioned pram which they had spotted contained not a real baby but a doll. An ugly blue doll. Max at first sees this as a sure sign that Eve is batty but when the youths who attacked Eve are attacked in a mysterious way, the teenager starts to wonder whether the wishbaby may have some real power after all - and she lets Eve teach her how to make one of her own. (The youths are attacked, one by one, after breaking into a recording studio one night. Coincidentally, a late-night, empty recording studio - albeit a slightly classier one - was also the setting for Eitan Arrusi’s Reverb, released to theatres mere weeks before Wishbaby came to DVD. Even more coincidentally, both films had the same camera assistant, James Friend.)

The important point here is that the wishbaby itself does not do the killing. This is not really a killer doll movie. Although there are a few scenes of limited movement by the doll and a range of interchangeable heads with various expressions, this is not a ‘living toy’ film. No, the perpetrator of these acts is ‘The Governess’,a figure from Eve’s upper class childhood. (In flashbacks, young Eve is played by producer Simon Sprackling’s daughter Liberty.)

Played with beautiful understatement, perfect elegance and just a hint of sub-dom danger by Claire Cox (ex-RSC with a long list of TV credits), the Governess is the real threat here, a mysterious and deadly supernatural entity who can best be summed up as a very English version of Ring’s Sadako. It’s not clear what she does; that’s one of the reasons why she is so scary (and yet beguiling too). I mean, it’s not clear who she is but it’s even less clear what she does. People see her; she appears, just not to everyone. Her appearance in a stuck lift with the two social workers is especially frightening because of the claustrophobic containment in that scene and the impossibility of (non-supernatural) access. (The male social worker is played by Tony Marshall who was Nelson the barman in Life on Mars. His female colleague is Sakuntala Ramanee who was in a 1989 Doctor Who adventure and played a teacher in one season of Grange Hill.) 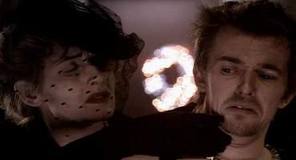 Clever editing and smart direction leave us in no doubt that something is happening without being as simplistic as showing us reality, any level of reality. There is some way in which people kill their friends because they perceive them to be doll-faced nightmares but it’s really not even as simplistic as that. Furthermore, the Governess is not just a vehicle for others’ wishes, she is a being with her own agenda, not just to serve but also to bewitch - specifically to bewitch Colin. That blue doll may give the film its title and its publicity image but it is the Governess that sticks in your imagination, raising questions of morality and reality with every slight turn of her perfectly sculpted head.

At its core, Wishbaby is a Faustian tale. At first Max uses the power of her own wishbaby to deal with the problems that make her life a misery: the social workers, the pimp upstairs. But while she may control the doll, she doesn’t control the Governess. And wishing for her mum to return may take things too far. Is that even her mum? Colin thinks not. First-time actress Ann Faulkner is particularly disturbing as Max and Colin’s mother: she looks scary even before she starts doing scary things.

It is the nature of Faustian tales that the Faust character loses control, and this story sees sympathetic characters die before climaxing in a savage and desperate battle between Colin and the being who may or may not be his own mother. This is a frightening tale yet also a beguiling, intriguing, fascinating one. And the whole thing is set against the background of inner-city, working class life, as defiantly British as Urban Ghost Story or Colin. This is the epitome of the British Horror Revival. 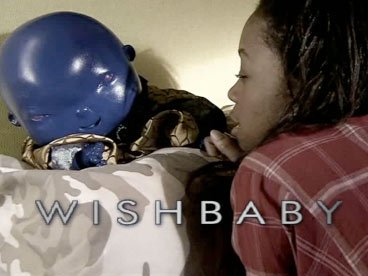 First-time director Stephen W Parsons does a fantastic job in creating both the realism of Max and Colin’s grim, urban world and the faded upper class shadows of Eve’s former life, while brilliantly mixing in the unnerving work of the wishbabies and the Governess. Previous to this he has worked as a composer for twenty-odd years, his notable credits including Food of the Gods II, Split Second, the Simon Sprackling-directed Funny Man, Luke Goss-starring gangster biopic Charlie, dodgy faux-sequel Another 9½ Weeks and the glorious Howling II: Stirba, Werewolf Bitch (aka Howling II: Your Sister is a Werewolf).

Sprackling has mostly been working on DVD-extra documentaries since he made Funny Man in 1994, some of them produced by Jonathan Sothcott, who takes executive producer credit here. Parsons’ wife Jacqueline was associate producer. Parsons shares credit for the score with Francis Haines, who composed the cemetery theme in Return of the Living Dead. Artists on the soundtrack include Essency, Dat Boy Aktiv, the Cabal, SLG, Undawurld, Klub Mundi and Doc Brown himself.

Neill Gorton is unfortunately misspelt ‘Neil’ on his credit as Special FX Co-ordinator. Sarah Lockwood, who has worked on Doctor Who and The Sarah Jane Adventures, is credited with ‘SFX make-up’ while regular make-up and hair was handled by fashion stylist Jay Turnbull, whose work has graced the cover of Bizarre magazine. Cinematographer David G Griffiths also photographed Journal of a Contract Killer. Dennis Madden, who has lit videos for Dannii Minogue and Prince, gets an ‘additional cinematography’ credit as does Luke ‘not related to Jack’ Cardiff. Madden and Sprackling subsequently collaborated on The Reeds. The editor was video artist Anke Trojan.

While many independent British horror films have difficulty getting publicity, Wishbaby actually made it into the nationals twice in the month of its release, although not necessarily for the right reasons. Ann Faulkner was charged with the murder of her partner of 13 years, who was killed when she drove over him following an argument. But in April 2009 she was found not guilty and also acquitted of manslaughter. Then a couple of weeks later Parsons himself was in the papers, explaining how he had asked the BBFC to increase the certification of the film. 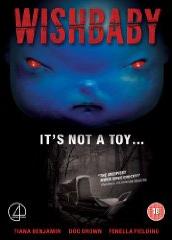 Originally passed as a 15, Parsons successfully argued that it should be an 18, saying, “I deliberately set out to make a horror film for an adult audience” and citing the happy-slapping camera-phone scene as something which could be copied by kids. Which was good publicity for Wishbaby but, in all honesty, the BBFC were doing the director a favour because there is no way that this is an 18. It’s creepy, scary, has some very brief drug use and a bit of violence but nothing that a 15-year-old kid shouldn’t see.

But don’t let that put you off. This is a powerful, impressive British horror movie and should be high on your list of movies-to-see if you have any interest at all in the current healthy state of British horror cinema.

The DVD from 4 Digital Media includes a trailer and two short films. Rough Magik is a 40-minute Lovecraft tale from 2000, written and produced by Parsons, directed by Jamie Payne and starring Paul ‘Avon’ Darrow. Karma Magnet is a 17-minute thriller from 2008, produced by Sothcott, directed by Martin Kemp and starring his brother Gary.