Whatever Happened to Pete Blaggit 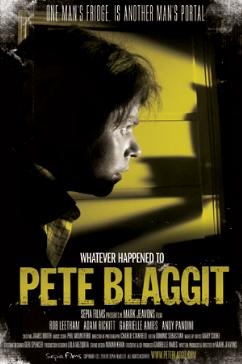 The title of this low-budget sci-fi comedy unfortunately brings to mind the notorious turkey Whatever Happened to Harold Smith. Touted as the great white hope of British cinema, that film flopped on its belly and killed the nascent cinematic career of Robert Lindsay stone dead. In its day, it was a byword for the hubris of the British film industry. I never actually saw it, but then neither did anybody. That’s the point. Years later, Lindsay is still doing penance for that mistake by starring in yet another joke-free series of My Family.

Anyway, that film has no connection with this one.

Peter Blaggit’s real name is Pete Blagmore and we’re told that he acquired the nickname ‘Blaggit’ because of his constant tendency to blag things, although this idea is slightly scuppered by the fact that not once in this movie do we see him ever attempt to blag anything. Blaggit (played by Rob Leetham, who was also in another low-budget British sci-fi, Waiting for Dawn) is a loser, a jobbing wedding video producer with unkempt hair who still wears the same hideous check suit he had in the 1980s. Helping him is his brother Eugene (Andy Pandini: Harold’s Going Stiff) and their mate Clive (Corrie’s Adam Rickitt). Blaggit still lives with his ex-wife Tracey (Gabrielle Amies, who is both co-producer and executive producer) despite having been divorced for six years. A tragic secret from their married life explains some of what has happened since.

Pete Blaggit is an angry, unpleasant man; angry with everyone around him because he is angry with himself. He rants and yells and orders people about, including people getting married. Some of his venomous insults are quite imaginative but after a while this constant yelling and puerile abuse (he’s fond of calling people ‘faggots’ which seems an inappropriate americanism) becomes a bit tedious.

After an amusing fake archive advert for Blagmore Wedding Services, the film takes a long time to get going and, when it does, it’s never clear where it’s trying to get to. Weird things start happening to Pete Blaggit. His wife’s fridge seems to contain a dimensional portal. He sees an ugly, small blue thing which calls him ‘Daddy’. He gets abducted by aliens and deposited back on Earth naked, but fortunately with his clothes nearby. 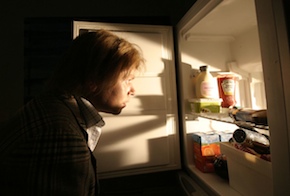 Eugene also sees weird things happening while watching The Wizard of Oz but that may be due to the pot he’s smoking at the time.

Two white skinhead thugs (Anthony Baines and Russell Barnett) threaten him about some money he owes his ex-wife. And two black brothers (Carl Coleman and Christopher Tajah), who are somehow connected with the two white thugs, want revenge for ruining a wedding day.

Via a casino, Pete and Clive somehow get involved with a mysterious, moustachioed Russian, Uri Poppolochovechski. The film culminates with Pete being forced to help the white thugs and black brothers rob a warehouse, but then a load of stuff happens after that too.

If none of the above makes much sense then it’s a fair reflection of the film. Whatever Happened to Pete Blaggit’s biggest problem is that not only do we never find out what happened to Pete Blaggit, we can’t even tell what’s happening to him while it’s happening. I’m sure writer-producer-director Mark Jeavons has the whole thing figured out in his head and there’s some reference near the end to an “alternate timeline” but honestly, the plot here is completely impenetrable. 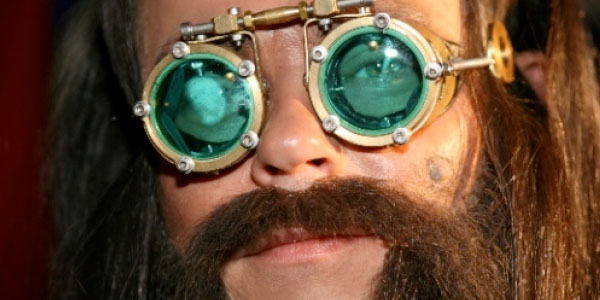 The publicity talks about Blaggit having “a mind-blowing opportunity to put right his past wrongs, will Pete be able to turn his life around before it's too late?” so throughout the film the viewer is waiting for some sort of It’s a Wonderful Life-style revelation or perhaps a Groundhog Day second chance but nothing like that happens. There are just some weird, unexplained things, then the film ends. There’s no consistency to the weird things, no structure to them, they don’t even build in intensity or frequency.

Surely, thinks the viewer, at some point either Pete Blaggit will discover what is going on, or we will. But we don’t and neither, it seems, does he.

For some reason, Uri is also played (very obviously) by Rob Leetham. When he first appears to Clive, after Pete has nipped off to the gents, the thick accent and even thicker facial hair led me to assume that Uri was Blaggit in disguise, perhaps having travelled back from the future, trying to put things rights. Most of Uri’s scenes are on the phone and he also has an abusive turn of phrase but whether he is supposed to be Pete Blaggit, or just somebody who looks like Pete Blaggit, or the actor who was originally going to play Uri just didn’t turn up - who can say? 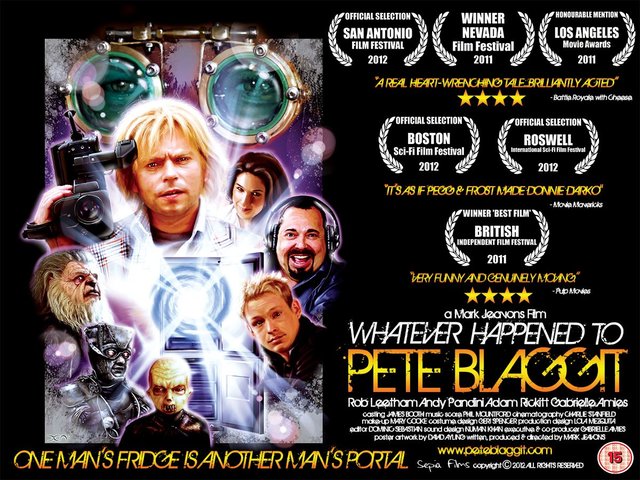 I have no idea what was going on with the robbery at the end. Clive seems shocked at a late-in-the-day revelation from Tracey about Pete’s compulsive gambling, despite having spent much of the film with him in casinos. And an early scene of Eugene smoking dope while watching Wizard of Oz and listening to Dark Side of the Moon in synch is completely at odds with his character throughout the rest of the film as ‘the sensible, responsible brother.’

The film is quite nicely directed and the actors all give good performances, especially Rickitt who is much better than one would expect from a former soap star in a low-budget indie. Unfortunately Leetham’s voice and mannerisms have a distinct touch of the Simon Pegg about them and this is likely to generate unhelpful comparisons with Shaun of the Dead. The effects vary from good (glowing fridge) to awful (blue thing). The music by Phil Mountford (who scored a Tomb Raider fanfilm) seems pretty good.

Honestly, I don’t know what else I can say. Whatever Happened to Pete Blaggit just doesn’t make any sort of narrative sense. It’s not trying to be arty or pretentious or avant-garde, I think it’s trying to be clever and smart. But it raises lots of questions that it never answers. Not philosophical questions or moral ones but basic questions like ‘Who is he?’ and ‘Why is he doing that?’ and ‘What’s going on?’ and ‘How does this bit relate to anything else?’ 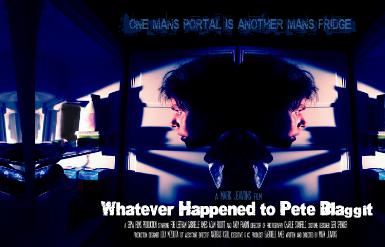 This could have been a likeable little film. It starts out endearingly as a comedy about a wedding video producer who is monstrously unsuited to his chosen profession, but then it drags. A lo-o-o-ng sequence of Pete ruining the black guy’s wedding makes its point but then shows no sign of stopping. And when the promised weirdness appears, any hope of a coherent plot goes out the window. At the end of the film we have no idea what has happened or why.

I don’t think it’s just me. I rarely read other reviews before writing my own but on this occasion I had to see if anyone else had figured out what was going on. All I could find was negative reviews which thought the film made no sense and positive reviews which pretty much paraphrased the publicity about an opportunity to turn his life around. I can’t find any evidence that anyone, apart from Mark Jeavons, actually knows what’s supposed to happen in this film.

All credit to Jeavons and his cast and crew for the work they’ve put into this film, most of which was shot (on super-16mm) in 2006 and then sat on the shelf waiting for sufficient funds to be completed. Any feature-length film is an achievement but I would be lying if I said that watching this was in any way satisfying.