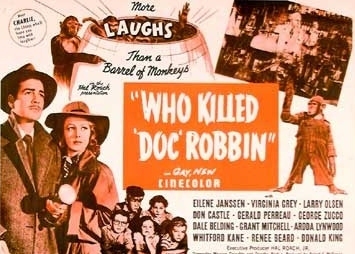 Those who complain about ‘racism’ in old movies are often interfering, know-nothing PC loons, and those who actually alter old movies to eliminate such ‘racism’ are even worse (the recent rewording of intertitles in a restoration of the 1925 Lost World is an example). That said, some films are jaw-droppingly racist in a way which cannot be excused in modern times - but their very nature means that they should very definitely not be tampered with. It’s important for people to see how casually racist even a minor kids’ film could be, reflecting the appalling state of American society only a couple of generations ago.

Who Killed Doc Robbin? is an Our Gang comedy in all but name, with five lovable (white) ragamuffins: the (male) leader, the (female) voice of reason, the boffin, the coward and the little one. Plus two black kids credited (both actors and characters) as ‘Dis and Dat’. It’s made abundantly clear that these two are not part of the gang per se. 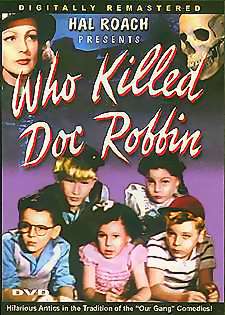 The story starts with a doctor’s surgery exploding then cuts to a courtroom where a nurse stands accused of the doctor’s murder. The kids disrupt proceedings but under questioning (and via flashbacks) reveal that the explosion was probably caused by the trigger of a nuclear device(!) created by local repair-man/inventor ‘Fix-It’ Dan - who is promptly arrested.

Seeking to clear Dan’s name, the kids investigate the smoking remains of the surgery and find a tunnel into an ‘abandoned’ old house nearby, full of scientific equipment, caged animals (for experiments), secret doors - and ultimately a (man in a suit) gorilla. They find a dead lawyer in a cupboard who later turns out to be merely unconscious, they send their dog to the town jail to fetch Dan and the police, and in a plot far more complex than it needs to be, the ‘gorilla’ turns out to be the still-alive Doc Robbin (George Zucco: House of Frankenstein, The Mummy's Hand - though it’s actually the legendary Charles Gemora, uncredited, in the suit), who was up to no good. And Dan is exonerated of the explosion because his trigger was useless without the rest of the device.

Dis and Dat mostly run around looking scared - like Stepin Fetchit’s nephews. In a dark room they appear only as two pairs of animated eyes, and one of them turns white through an optical effect when he first encounters the gorilla. But the worst scene has the smaller one falling into a large washing machine. No, he doesn’t emerge ‘clean’ and white, though he is coated in white soapsuds. But his clothes somehow become detached, emerge separately and are put on by a chimpanzee who has broken loose. And as the chimp runs around the house everyone thinks it’s the little black kid! It’s astounding that this sort of stuff was considered perfectly fine for children even after the horrors of WW2 (when black GIs were formed into their own battalions and confined almost exclusively to non-military duties such as roadbuilding).

The casual use of a nuclear bomb as a McGuffin, three years after Hiroshima, is also astounding, and one of the kids recites a poem of his own devising in court about how “the Japs” must have “had a fit” when their city was destroyed! (It’s tastefully entitled ‘Bombs Away’ and all the grown-ups find it delightful.) 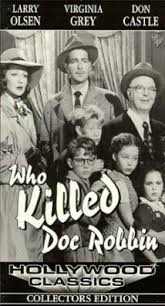 The film was reportedly retitled Sinister House in the UK and has been shown on US TV as Curly and His Gang in the Haunted Mansion (although the building in question is neither a mansion nor haunted). Director Bernard Carr had been an assistant director on Hal Roach's prehistoric epic One Million BC and had directed a previous film about the same group of kids, Curley, in 1947. There does not appear to have been a third film in the series.

This 50-minute film just about falls into the SF/horror genre by virtue of ‘Fix-It’ Dan’s atomic home technology, the gorilla-as-stock monster, and the spooky old house. It is a pain to sit through however: the cowardly white kid is particular annoying, being an even worse actor than his comrades - and that’s saying something - and having an almost ultrasonic scream. Nevertheless, anyone who thinks that America fought WW2 for democracy and freedom should be forced to watch this (or something like it) so they can see how little difference there was between Hitler’s views on race and those of Joe Q Average in post-war USA.