I interviewed Robin Sydney, star of The Gingerdead Man, by phone in February 2006.

How did you end up getting involved in a Charles Band film?
"I got an audition through my agent and manager so I went down and first I did a pre-read, then I went to call-backs twice. I got the part on Friday, I got the script on Sunday and we started working on Monday. So it was pretty quick! But it was great because it kept you on your feet and always in the moment."

Had you seen the script when auditioning, or just sides?
"I had only seen sides. Some of the girls had seen the script and they were asking questions about it but I never saw the script until the Sunday before filming."

Did you audition with any of the other cast?
"I did. On the final call-back I worked with the guy who ended up playing my boyfriend. During the session, they had the guys audition before the girls - so they hired this guy and kept him in the room and then all the girls came and read with him. I think that’s great because it really gives you a chemistry and a feeling."

Were you familiar with Charlie Band’s work before this?
"I actually wasn’t, but once I got it, I asked everybody. I was like, ‘So do you know Puppet Master?’ and one of every four people knew exactly who he was. It was amazing."

How long was the schedule?
"A two-week shoot. I worked every day and it would be full-day shoots. It was great, it was a family. It felt really good. Charlie is amazing, he is so fantastic. Sometimes directors will be critical and fussing and ‘go here’ and ‘go there’ - and he is not like that. He lets you be free. He gives you the space and he has a rehearsal and you do it, and you can move around and do this thing and that thing, you can change it a little bit. He has the camera follow you - and that is the most important thing for staying in the moment as an actress. He gives you little tips but he’s just very subtle, very nice, very free. He lets you feel like you can be on top of the world when you’re working with him." 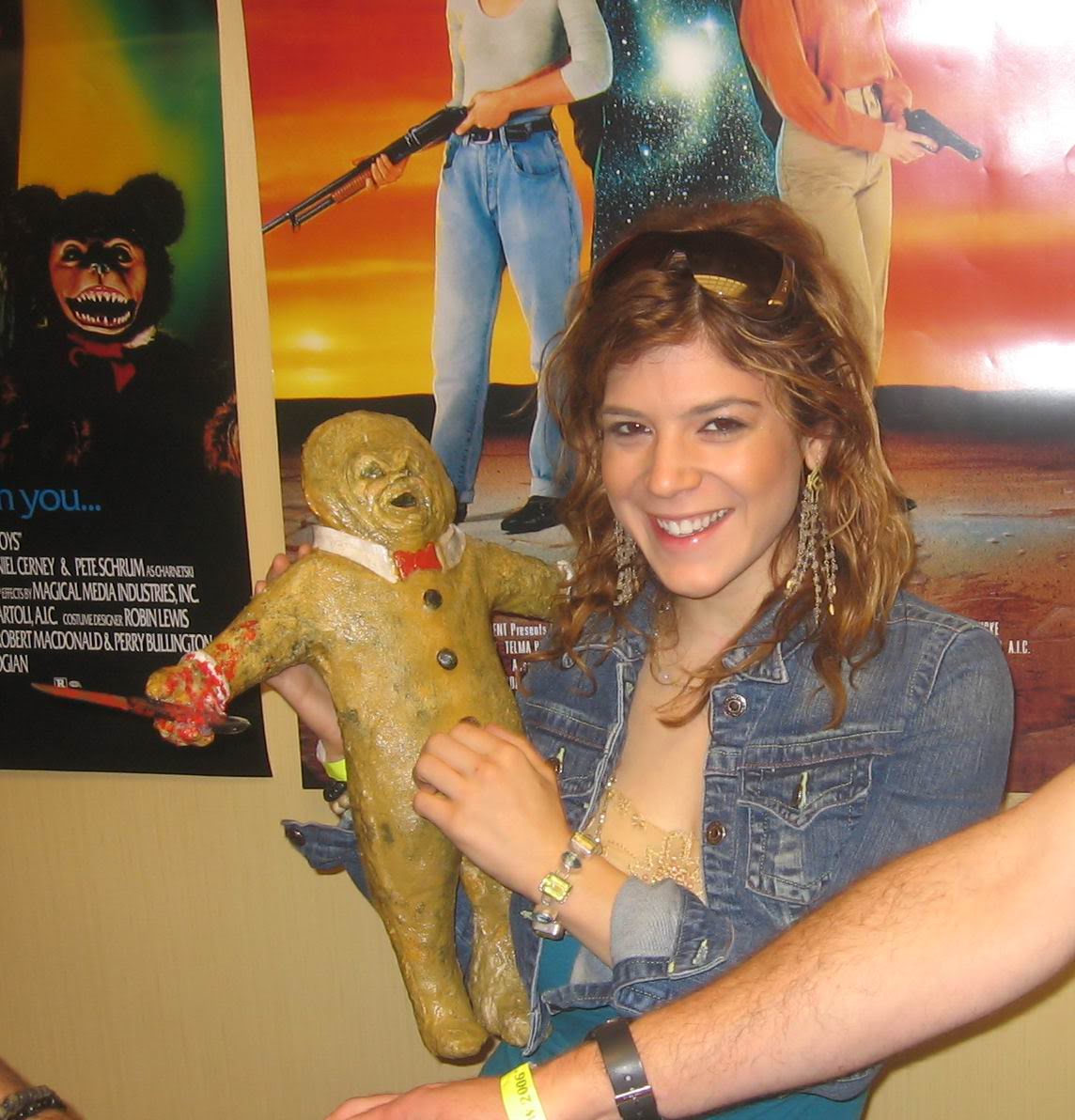 What was Gary Busey like to work with?
"He was intense! He was crazy. I worked with him for one day because in the opening scene he’s there and then he’s the puppet. On the day that I worked with him, he was so crazy. I didn’t have to act scared, I was just so scared - there was no acting involved! On and off, he was something else. But he was very giving. I guess most stars would do their close-ups and then they would leave the set. So Charlie set it up that way so they did his close-ups first and then they would do everybody else’s, just in case he needs to leave or whatever. And he was so sweet. He did his stuff, then we had a break for lunch and he could have absolutely left, but he ended up staying, just so he could help us by being on the other side of the camera while we were doing it. That was very helpful, very sweet. He had the craziest stories, but he is so talented. He never stuck to the script; every take was different which almost made it scarier. It was freaky. He did an amazing job and it was really fun working with him."

In the rest of the film, was Gary Busey’s voice already on tape?
"Actually, what happened was that they ended up recording his voice after we shot everything. So it wasn’t even his voice, just people reading his lines off to the side. So we would see this puppet or sometimes there wouldn’t even be a puppet. I was so scared of this gingerbread cookie that I had nightmares every single night while I was filming. One take we did, the guy who played the puppet had to leave and so Charlie had this cup in place of where the puppet would be, that we had to look at. I got so freaked of this cup, when we were all walking away holding hands. Charlie threw this cup at my feet and I got so scared that I dropped to the floor and everybody had to drag me off the set!"

What did you think when you finally got the chance to see the film?
"I loved it. I think when you’re filming you don’t really know what it’s going to look like. It’s all in the moment and about the characters. It’s a little weird when you watch yourself, definitely. But I think Charlie is so talented and so amazing, and the music is phenomenal. It’s definitely a crazy movie, a movie that you see with your friends on a Saturday night. It’s one of those kind of movies. And it’s great, it’s fun, I really like it. I was really happy with the end result of The Gingerdead Man."

Charlie’s a bit of a one for sequels. Would you be up for Gingerdead Man 2?
"I would be." 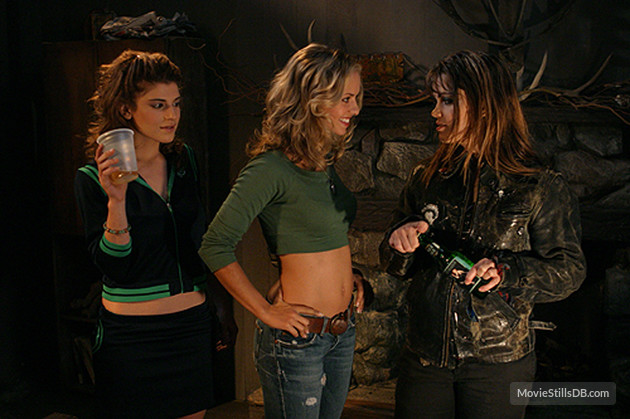 You’ve also done a film recently called Big Bad Wolf. What’s your role in that?
"It’s a totally different character to Sarah-Lee in The Gingerdead Man, Sarah-Lee’s very innocent and sweet. In Big Bad Wolf, I’m Party Animal Girl - so there’s all that drinking and partying and teenage fun. Then there’s this... werewolf. So it’s fun. That’s that character, and then right after I filmed The Gingerdead Man I did a film called The Lost which is coming out, and in that I was a total bastard, a hardcore druggie bad-ass. So that was fun too!"

Is The Lost a horror film or more of a thriller?
"It’s kind of hard to categorise. I think, as a horror film, it’s almost a drama, as opposed to Big Bad Wolf or Gingerdead Man which are more serious horror, with people running around and stuff. This is more like a drama-horror. There’s four leads in it and I’m one of the leads. It was great, it was so much fun to play a bad-ass character. I loved it. It was a very sophisticated character because she has to deal with so many things: her mom’s schizophrenic and things like that."

Was there a lot of blood in the film??
"Not too much. Only towards the end of the film. For most of the film there’s not too much blood."

In Big Bad Wolf, do you have any scenes with the werewolf?
"I do, I get attacked by the werewolf. It was so scary! They had this blood spray. It’s called an ‘extinguisher’, this big blood pack, and they wire it up to your head and they have this blood that’s going to spray. It was freezing that night and I had these boots which I put on. Then, when the werewolf attacks me he’s throwing me around and eating me and gashing me and this blood is spraying everywhere - and it got all in my boots. So when I was walking anywhere it was like big swamps on my feet, it was awful!"

Did you have any scenes in Big Bad Wolf with American Werewolf in London star David Naughton?
"I wasn’t in the scenes with him but I did work with Clint Howard which was great."

How long have you been acting?
"I started acting when I was eight years old, in theatre in Colorado. I did over 20 productions with this particular professional children’s group. Then when I turned 14 I got into film, in Colorado, and I did every single film there was to do in Colorado. I moved out to Los Angeles when I was 17 and started out here, and it’s been amazing. Acting is a process and you just keep doing it, you keep growing and keep enriching yourself. I love it, I love the process, I want to continue to act and grow and explore different characters and different people. There’s nothing better than experiencing what other people are doing in their daily lives and living it and being in that moment." 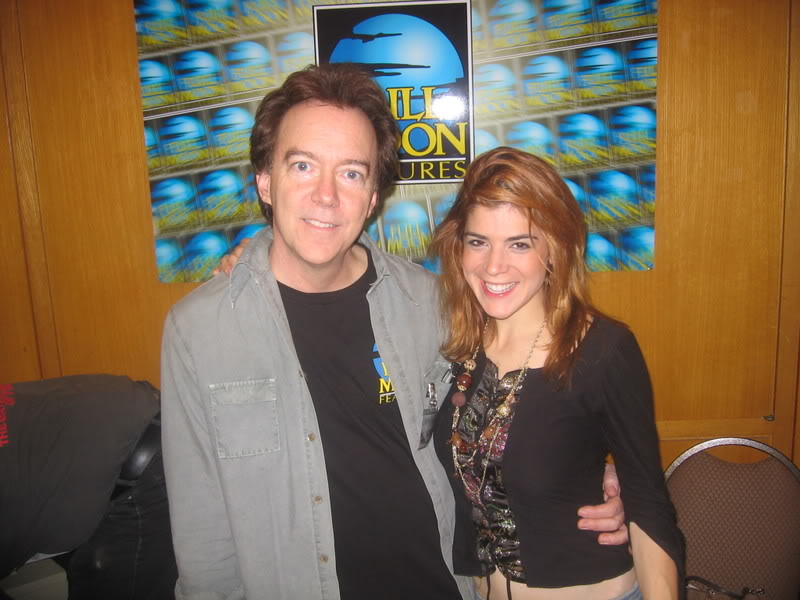 You’ve done three horror movies in a row. Are you turning into a scream queen?
"I did a fourth film in there which was a comedy, which kind of broke it up, called Cattle Call for National Lampoon. But I think those were just the movies that I got. It wasn’t necessarily that I just wanted to do horror movies. But horror movies are fun, they keep you on the edge of your seat. I really enjoy doing horror movies - I really enjoy doing any movies. It’s just fulfilling the character and their needs and wants."

Have you got any movies lined up?
"I think I’m going to be doing another one of Charlie’s film. It’s called Dead Man’s Hand. Bill Moseley plays the evil guy. I’ve got the script and it’s going to be this killer, unbelievable movie. It’s about this haunted casino."

What’s your ultimate ambition?
"I just want to be able to work all the time, to just stretch myself and grow into characters that are very sophisticated. My goal is to just act.”
Posted by MJ Simpson at 17:06