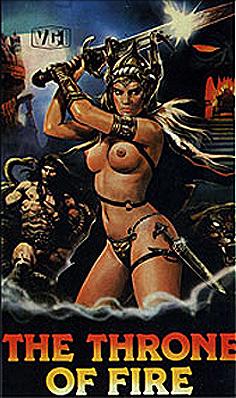 More tedious early 1980s Italian sword and sorcery crap. How many of these bloody films did they make?

A witch called Azeera gets raped by Belial (Harrison Muller from Avi Nesher’s She) who is ‘the Devil’s messenger’ and wants a son to rule the world. She gives birth on a stormy night to a hideous mutant thing which grows up to be handsome but cruel Morak (Muller again). Born at the same time is Siegfried who grows up to be Pietro Torrisi from Werewolf Woman and Django the Bastard.

The land is ruled by King Agon the Wise who sits on the titular throne of fire, which was forged by Odin (apparently). If Morak can kill Agon and marry his daughter Princess Valkari (Sabrina Siani: Black Cobra, Ator the Fighting Eagle, Mondo Cannibale) he can sit on the throne and rule to his evil heart’s content. But he must do this before sundown on ‘the day of the night in the day.’

Well, killing Agon proves no problem. Morak has a whole army of black-garbed bad guys and we eventually see a flashback to the king’s demise. But Valkari escapes. Eventually captured, she is rescued by Siegfried. And when he is captured, she rescues him. There‘s a lot of very ho-hum to-ing and fro-ing and much running around a castle which, in the manner of these things, has iron handrails on the steps and modern guttering. 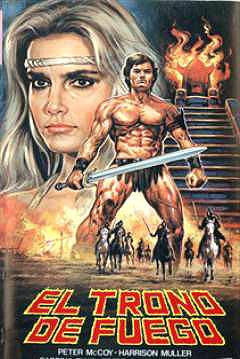 At one point, Morak shows how villainous he is by offering to free the villagers he captured along with Valkari, letting them run one by one towards the door only to be shot in the back with his arrows. Later, Siegfried is thrown into the Well of Madness which proves to be an underground cave system where he faces hallucinations including a panther, a floating head and a python which he drapes round his neck and pretends to wrestle with. It seems to be real and live but drugged up to the eyeballs. From the Well of Madness he breaks into a cell where he finds his father Antar (as you do) who turns out to be a magician and grants him a one-time spell of invisibility while also making him invulnerable to everything except fire.

But that rotten old Morak overhears this and fires a flaming arrow at Siegfried when he tries to escape with Valkari. Morak’s problem, you see, is that only legitimate rulers can safely sit on the throne, and he will only be legitimate if he marries the late king’s daughter. He demonstrates what will happen otherwise by asking a doubting courtier to sit on the throne. Up come the flames and the guy burns to a nasty death.

Eventually it all comes down to a fight in the throne room between Morak (who is still a mutant-demon-thing at heart) and Siegfried... just as a total eclipse is happening. At the moment of full eclipse - ‘the day of the night in the day’ - Siegfried pushes Morak onto the throne where he roasts, on account of not being married to Valkari presumably. It all ends happily with Siegfried and Queen Valkari cheered by a small group of villagers, all of whom were murdered by Morak about fifty minutes earlier.

Even by the low standards of this dodgy subgenre, Throne of Fire (Il Trono di Fuoco) is rubbish. There’s not even a mad narrator with giant shoulder pads to relieve the tedium of the threadbare plot. Plentiful shots of Morak’s hordes attacking villages (well, the same village from different angles) are scattered throughout the film for no good reason. Some shots were overcranked so they can play in slow motion but one has been accidentally speeded up so that villagers skitter around like extras in a Benny Hill sketch for a couple of seconds.

Among the cast are Benny Cardoso (not ‘Beny’ as some sources claim, though her real name is apparently Beni Cardosi) from Vampyros Lesbos, She Killed in Ecstasy and Sumuru; Isarco Ravaioli, finishing off a career that began in 1953 and included The Vampire and the Ballerina, Wild Wild Planet, Three Graves for a Winchester, Danger Diabolik and Achtung! The Desert Tigers; and Roberto Lattanzio - now an assistant editor in Hollywood!

Franco Prosperi directed Hercules in the Haunted World back in 1961 and a bunch of other great-sounding flicks of which the one I most want to see is a 1967 low-rent Bond spoof called Dick Smart 2007. Producer Spagnuolo’s most notable credit was Fulci’s Aenigma in 1987.

Interestingly, the artwork on the British video sleeve is identical to that used for the Spanish poster for another Spagnuolo production, Sword of the Barbarians - as La Espada Salvaje de Krotar - even though it is clearly more relevant to this film (it features a throne of fire, for one thing). Sword and Throne both starred Sabrina Siani and ‘Peter McCoy’ but ironically the bloke in the painting looks less like Pietro Torrisi than I do!

There are a few brief shots of quite nasty, bloody wounds, courtesy of make-up man Giuseppe Ferranti (The Bird with the Crystal Plumage, Cat o’Nine Tails, Cannibal Ferox, Monster Shark, Rats: Night of Terror). Special effects (such as they are) are credited to Paolo Ricci (The Sexorcist, Mountain of the Cannibal God, Eaten Alive, The Atlantis Interceptors, 2019: After the Fall of New York). Silvio Laurenzo (The Case of the Bloody Iris) designed the costumes, which must have taken all morning, and the art director was Franco Cuppini who was set decorator on Argento’s Inferno and assistant set decorator on Juliet of the Spirits! 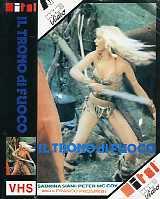 The only watchable thing in the film is Siani (real name Sabrina Seggiani, also variously credited as Sabrina Sellers and Diana Roy) who was nineteen when she shot this and not only looks good in her suede bikini but can actually wield a sword. She puts far more effort into her performance than this shoddy film deserves.

This was one of several sword’n’spaghetti flicks made/released by Cannon in 1983-85, the others being Thor the Conqueror, Hercules, She, Sword of the Barbarians, The Adventures of Hercules and The Seven Magnificent Gladiators.