You Belong to Me

You Belong to Me is a tense, well-crafted chiller in the Misery subgenre of enforced captivity horror. Adapted by writer-director Sam Zalutsky from his student short film (not included on the DVD, sadly), the movie stars Daniel Sauli (United 93) as Jeffrey, a young man who rents a New York apartment almost by accident, having trailed an unfaithful former lover. Patti D’Arbanville (Time After Time, Flesh, Big Wednesday) is Gladys, cheerily buxom, middle-aged owner of the building, and Sherman Howard (Day of the Dead’s Bub) is Stuart, the hulking, deaf-mute super.

Jeffrey (who is an architect) sets about decorating the place, which was still full of the suddenly departed previous owner’s clothes and belongings when he first looked around. Repairing some water-damaged floorboards in the corner, he hears what sounds like a person moaning. Tapping sounds suggest there is somebody right below him - but didn’t Gladys say that her own apartment was directly below Jeffrey’s? (She did indeed and so it is, although her door is on the left at the bottom of the stairs and his is on the right at the top, which is a curious continuity problem.)

There’s a sense of tension bubbling underneath the apparently calm proceedings of the first half of the film. Gladys is perhaps a little too eager to befriend and look after her latest tenant and the presence of Jeffrey’s ex in the same building naturally leads to tension, plus there is the hulking person of Stuart and a weird guy in another apartment who says he is looking for his wife. Oh, and a guy called Michael (Kevin Corstange) turns up, possibly drunk, looking for the previous occupant of Jeffrey’s flat - who was called Geoffrey.

There is nothing actually bad or scary, in fact even the sound from under the floorboards isn’t really creepy - until we make out the words “help me”. When Jeffrey decides to investigate, things suddenly take a turn for the worse and he finds himself a captive of a seriously deranged couple. We were of course waiting for this to happen - we have read the sleeve blurb, seen the trailer - but it’s still a shock and leads into the second half of the film as the captive desperately tries to escape from the woman who only wants to look after him. Meanwhile Jeffrey’s ex-flatmate Nicki (Heather Simms) is wondering what happened to him and his dog Max is starting to look gaunt, up in the empty apartment.

Zalutsky’s script and direction combine to turn the screw on the tension which doesn’t flag, even when Jeffrey’s most concerted and semi-successful escape attempt is frustratingly thwarted (in a not entirely believable scenario, it must be admitted). After that, he starts playing more subtle games, apparently playing along with Gladys’ delusions but actually working to drive a wedge between Gladys and Stuart. Although these mind games contribute to the denouement, they are not developed quite far enough and the final events - after a revelation which definitely tips the story into the horror genre - seem slightly rushed. Without wishing to give away the ending, one character is deliberately killed and one is accidentally killed (or it may be considered self-defence) and the story would, in my view, end more satisfyingly if it was the other way round. You will know what I mean when you see this. 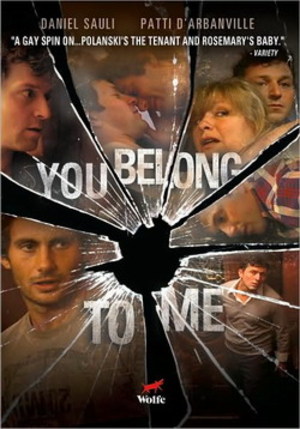 And I do encourage you to see it. You Belong to Me is a great little film, not a moment too long at 82 minutes and adroitly directed with some fine acting performances. Also in the cast are Linda Larkin (the voice of Princess Jasmine in Disney’s Aladdin and its various spin-offs), Rafael Sardina (who had a bit part in Spielberg’s War of the Worlds) and French actor Julien Lucas. Most of the cast have been in The Sopranos at one time or another. Cinematographer Jonathan Furmanski mostly works on documentaries and music videos (including camp cult classic 'Gay Boyfriend' by the Ukes of Hazzard) while production designer Tamar Gadish’s coolest credit is Sesame Street spin-off Elmo Visits the Doctor.

Oh, one final thing. Jeffrey is gay. Which has no bearing whatsoever in the story - so I decided it should have no bearing whatsoever on this review. Although this isn’t really ‘gay cinema’, it has been released in the UK by Peccadillo Pictures, a company specialising in gay and lesbian films. They also released Vampire Diary and have several other genre pictures in their catalogue including Make a Wish, Poltergay and The Wolves of Kromer, plus Boys on Film 1: Hard Love, a collection of shorts including Michael Simon’s Gay Zombie.