It’s always a thrill and an honour to be the first reviewer of a film but it’s also a worry. What if I’m completely out-of-step with everyone else? How honest should I be about stuff that I don’t like? How do I write a review which will be as relevant when it is first read - by people who, naturally, know nothing about the film - as it is when it is read later by people who have read other reviews or seen marketing material? It’s a responsibility, that’s for sure.

In the case of this thoroughly enjoyable British indie horror movie, my natural reaction is to pre-empt what other critics are going to say: Blah blah blah Blade blah blah blah Underworld blah blah blah low budget blah blah blah. The main character is a vampire who hunts other vampires, a sexy woman in a tight, leather costume who uses martial arts in an ongoing supernatural conflict. It’s impossible not to make such comparisons, however lazy they may be, so let’s get them out of the way now.

I should also get out of the way any concerns about the apparently ungrammatical title by directing you to my interview with writer/director/producer James Eaves (Sanitarium, Hellbreeder). And now, on with the review...

Claudia Caulter (who was in a sci-fi short called Frozen and also in an Oasis video) stars as Rebecca, a ‘genetically created vampire’ who is resurrected by the shady ‘Project 571’, injected with blue goop and then trained as an assassin. This early part of the movie is terrific, helped by suitably poker-faced performances from Andrew Cullem and Liza Keast as the project’s overseers and a powerful (and decidedly icky) scene where Rebecca, still unaware of what is happening, is forced to choose between a glass of water and a glass of blood. 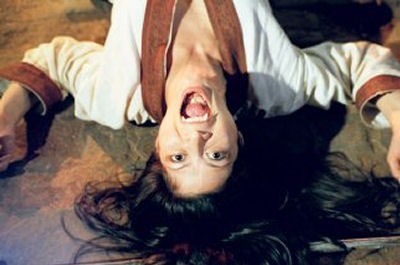 Trained up by the project’s martial arts instructor (Adrian Johnson, who is female despite her name), Rebecca learns to use her increased strength and agility but she also learns that she cannot go back to her husband and young son. Eaves was also editor on the film and really uses the edit suite as a creative tool. There are lots of flash-cuts, especially in these early scenes, sometimes jumping around in time and space in a way that could be disorienting but isn’t. I found the sequence where Rebecca is told she can see her family briefly particularly moving because of the editing which only allows us to understand quite what is happening and what the words we hear really mean right at the end.

Having established Rebecca’s situation and prowess, partially through a hostage situation which goes awry, the story moves on when the staff of Project 571 are murdered and Rebecca finds herself ambushed by a bunch of vampires. The fights in this film were choreographed by Kris Tanaka (fifth degree black belt, who also appears as a vampire later on) and they’re very good. All the protagonists clearly know their stuff and, while the fights are naturally slightly stylised, they don’t come across as artificial or posed. The martial arts moves are complemented by appropriate direction and editing, something which many big budget films forget when it comes to action sequences.

Rebecca finds herself roped into Project 572, which seems to have even fewer staff than 571. To wit: Madeline (Stephanie Beacham) and Edward (Jonathan Sidgwick: Man Who Sold the World). Madeline is a high-ranking witch and Beacham (whose surprisingly long list of genre credits includes Dracula AD1972, The Nightcomers, Tam Lin, And Now the Screaming Starts, Schizo, House of Mortal Sin, Inseminoid, The Wolves of Willoughby Chase, the first season of seaQuest DSV and episodes of UFO, Star Trek TNG and Hammer House of Mystery and Suspense) plays her splendidly with a debonair superiority and a supercilious insouciance which puts one in mind at times of a supernatural Ann Robinson. Edward on the other hand is an occult scholar, played with an ambiguous mixture of nervousness and confidence. 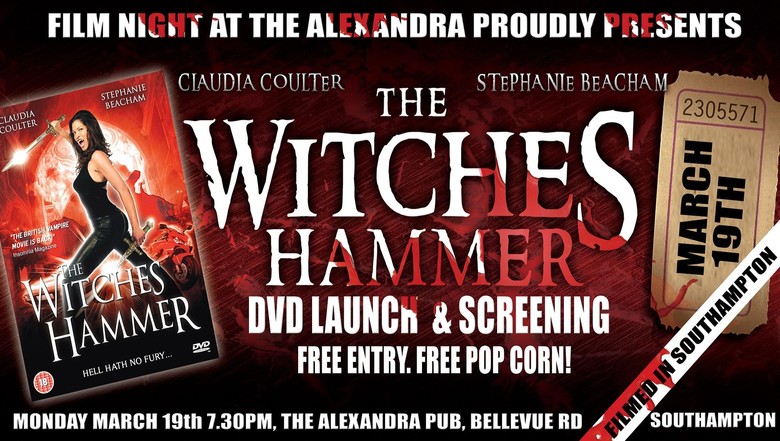 We are introduced at this point to the movie’s McGuffin, an ancient book called Mallues Maleficarum or The Witches Hammer which contains the spells required to defeat the great vampire Hugo Renoir (Tom Dover), who is plotting world domination with the help of his chief assassin Victor (Miguel Ruz). (Hmmm... ‘Victor Hugo’? I don’t think it means anything.) Although the A-plot is Rebecca and Edward’s quest to defeat Hugo, the movie’s greatest strength lies, to be honest, in its subplot about two vampires who are on the trail of the book.

Jason Tompkins, who plays Oscar (and was apparently in a game show called Beat the Cyborgs), is not the first short actor to play a vampire but Sally Reeve (“a voluptuous comedy blonde” - Time Out), as Charlotte Apone, is certainly the fattest actress in the history of cinematic bloodsuckers. We meet the tiny man and the huge woman at a circus where we establish not only their sanguinary tastes but also their arch and mannered passion for each other. Every single line of dialogue between them ends with ‘sweetheart’ or ‘honeybun’ or ‘angel’ or some similar affectation of affection, even as they calmly discuss the violence and bloody gore which they leave in their wake.

These two are a terrific double act, Apone raising the interesting question of how do you kill a vampire so rotund that no stake could get anywhere near her heart? Actually, the film does take the trouble early on to explain to us - by explaining to Rebecca - the ground rules for the vampires in this film: severing the head kills them, puncturing the heart kills them, sunlight burns them (Rebecca keeps her motorcycle leathers on during the day and makes a lengthy train journey in a coffin). 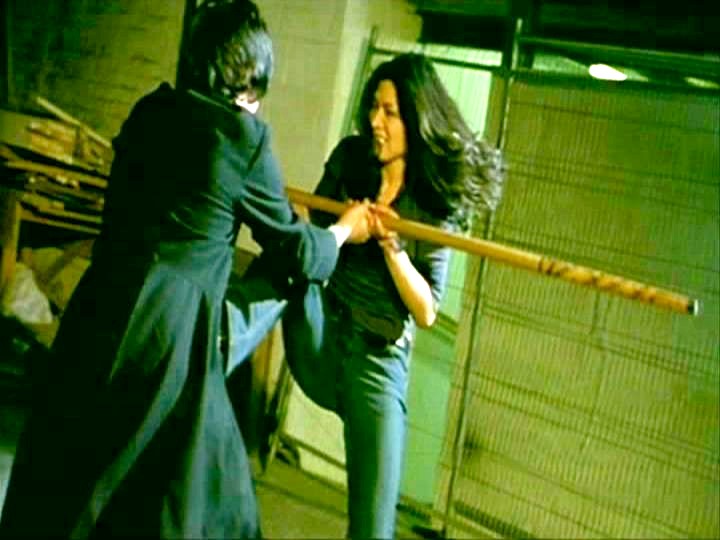 Eaves has a penchant for flashbacks and we get four during the course of the film. Madeline explains how the Mallues Maleficarum came to be written by Kitanya (Magda Rodriguez: Castell de Ferro), a peasant girl in Medieval Russia who was ‘the first witch’ (and who is seen despatching the priest who wronged her using a bloody great hammer). Edward explains how he was recruited by Madeline, how arch assassin Victor became a vampire and how Apone was turned. This last flashback takes place in the late 19th century and is presented as a black and white, silent film with intertitles. Like all the Apone/Oscar scenes it’s laugh-out-loud funny, although The Witches Hammer, while it’s directed with a light touch, is certainly not a comedy. Rare indeed is the comic relief which manages to not only be genuinely comic but also provide effective relief from the main story without detracting or undermining it, but this film proves that it can be done.

The finale, which takes place in a suitably gothic castle (God knows where that is - this was filmed in Southampton!) has some plot twists, some revelations, the resurrection of Kitanya and some more fighting, including a casual beheading of a deliberately irritating character which should have audiences grinning and quite possibly cheering. The whole thing ties in somehow to three Grim Reaper-style ‘souls of the damned’ whom Hugo is attempting to control for his own ends.

Overall, The Witches Hammer is enormous fun. It doesn’t try to be any more than it is. By not being overly ambitious, the film works wonderfully on its own level and constantly impresses; anyone who loves independent horror movies will get a kick out of this one. The acting varies somewhat and there are some sequences which don’t really make complete sense but get away with it by being stylish and clever, notably a fight in a (swiftly emptied) pub between Rebecca and some sort of supernatural ninja. There’s not a whole lot of plot but there’s some nicely drawn characters, some kick-ass fights and some surprising laughs including a Carrie reference and an audaciously silly Citizen Kane gag. The film also looks great thanks to top-notch cinematography by John Raggett (Forest of the Damned, Nature Morte, Nightmares) using 35mm stock; I don’t care how good digital video gets, there’s still a sense of cinema that you get from 35mm footage which you just can’t get any other way. 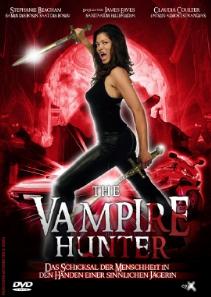 Dark Raven Digital (Kingdom, Warrior Sisters) provided the visual effects, including vampire deaths which are surprisingly similar to those in Kaew Kon Lek. Nemesis CGI, React Films (With Evil Intent) and Poppy Effects are also credited for specific sequences. The Demon Within director Harold Gasnier, who gets a ‘special thanks’ credit rather than ‘executive producer’ as listed in some places, has several small roles, all of which end unpleasantly and one of which is a gag reference to his role in Hellbreeder. An all-girl band called the Lillettes play a number in the pub before it empties for the Rebecca-vs-ninja fight.

The Witches Hammer (which was retitled The Vampire Hunter for its German release and Dark Evolution in Japan) is a corking horror/action movie which oozes professionalism. Deftly directed and carefully paced to balance action sequences with slower, character-based scenes, this is a highly commendable addition to the continuing British horror boom of the early 21st century.