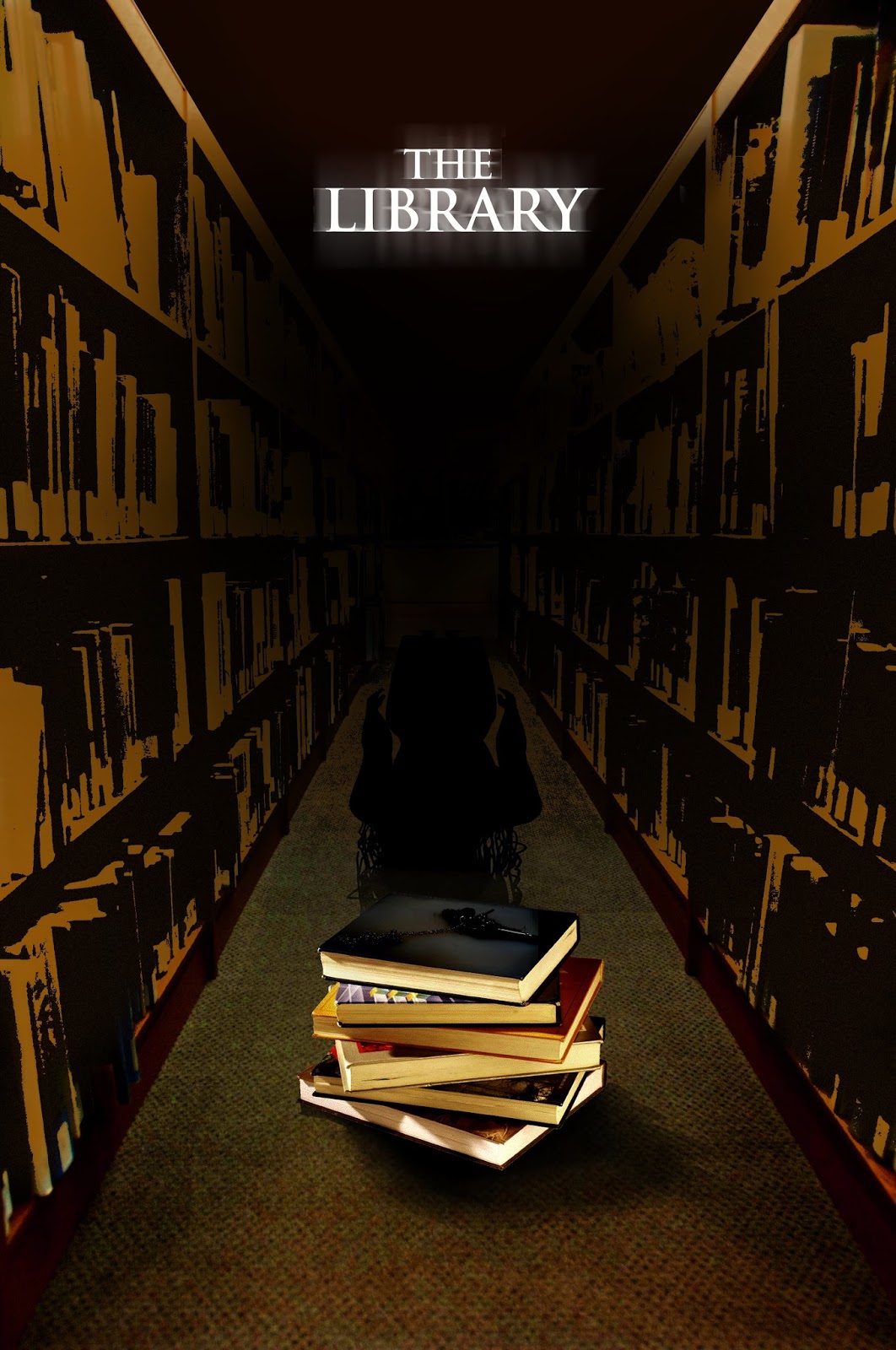 The Library is an admirable - and reasonably successful - attempt at a traditional British ghost story. Though it suffers from limited production values (of course) and a script that could have maybe borne one more trip through the rewrite mill, a combination of a good cast, some fine photography and a sincere, non-jokey approach creates a worthwhile movie and one that shows promise for the future work of Daljinder Singh.

The library in question is a small public library in a Victorian building, represented by the 1869 library at Hall Cross Academy in Doncaster. Scottish actor Sibylle Bernardin, affecting a somewhat transient transatlantic accent, is Lucy, a postgraduate fine arts student who takes a part-time job at the library to make ends meet. What she didn’t realise, because she had been out of the country for several months, is that the library was the scene of a brutal murder and in fact she has taken on the job of the victim.

There are two other staff: stern Mary (Kathryn Walker) and slightly creepy Gregory (Bradley Carpenter). The former is an efficient schoolmarm with no time for shilly-shallying, the latter may just be socially awkward around women of his own age. Either or both may know more than they’re saying.

Over the course of a (slightly too long) 90 minutes, Singh introduces a series of bizarre and disturbing events into Lucy’s life but cleverly combines these with real life problems and stress (not least that she is this close to failing her degree). A sequence in the toilets of a deserted late-night bus station is particularly effective, with taps and hand-dryers all coming on and then, as Lucy exits the room, a simultaneous closing of all the stall doors. There is also a spooky scene later on when Lucy sees a mysterious and creepy small girl in the library (Madisson-Ann O’hara, presumably daughter, niece or sister of make-up/hair artist Julie Ann O’hara). This has both a rational explanation and a supernatural extension, simultaneously leaving us both sure that something unearthly is at play and certain that this is all happening in Lucy’s head.

And there, I realised after musing over the film which at first pass I found a little dull, lies the strength of The Library. Many of the best ghost stories leave the viewer/reader in doubt as to whether the events therein are genuinely supernatural or have a psychological explanation (or both or neither…). It is possible to watch this film as a slice of fantastique, a genuine haunting. But it is equally possible to read the movie as the descent into madness of a disturbed young woman, her overactive imagination tripped over the edge by finding herself stepping into the professional shoes of a murder victim. 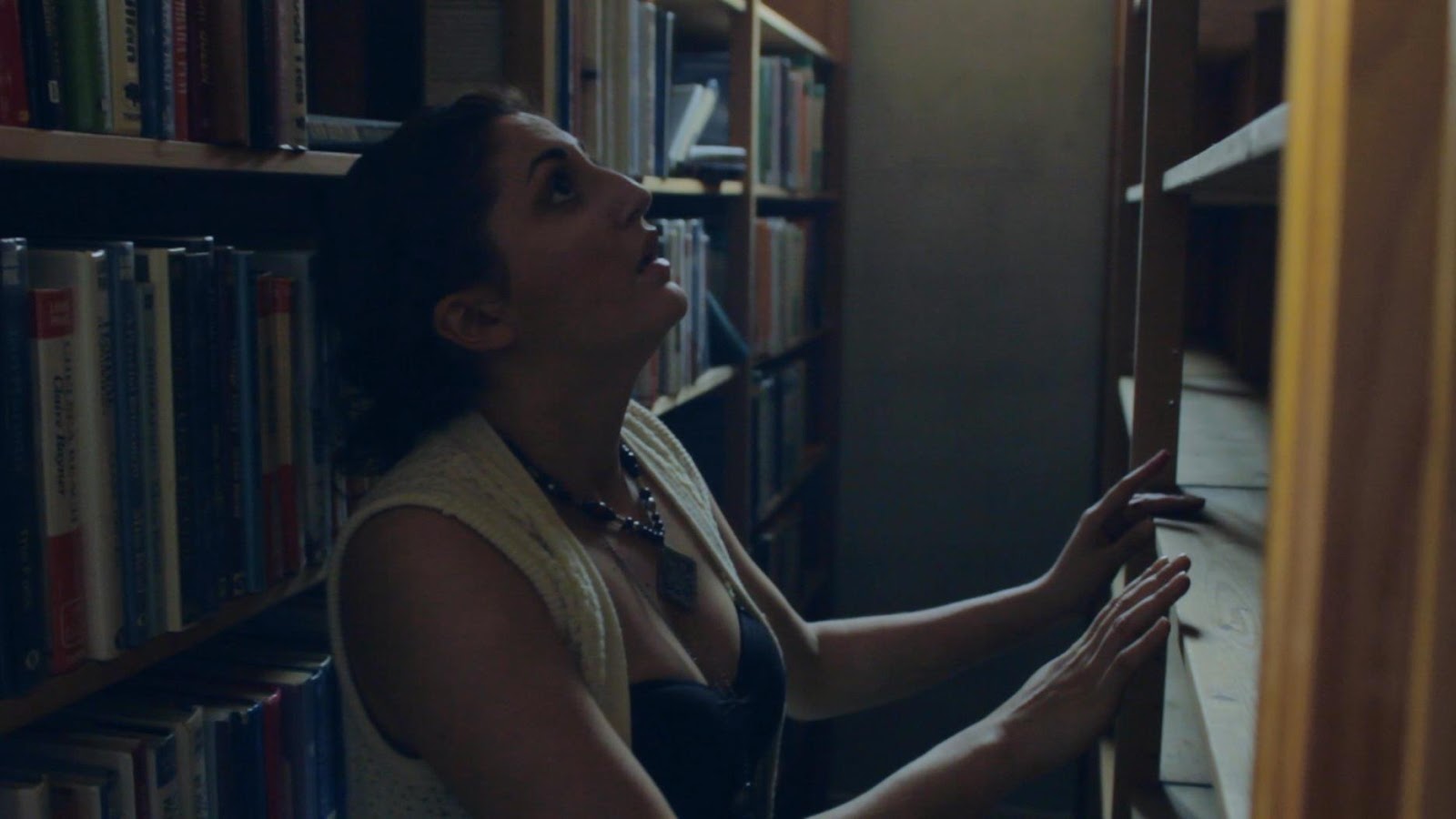 On the one hand, sure, those taps really came on, those toilet doors really closed (and Lucy wasn’t even in the room then). That’s solid evidence of a ghostly manifestation, right there. But if we approach the film narrative as an unreliable narrator, then perhaps those taps only turned on in Lucy’s head, maybe she only imagined that the doors closed after she left the room. There are some definite clues in the later part of the film that Lucy is suffering from psychological issues which all point to a rational explanation for what she sees and experiences, without taking away from the supernatural possibility. Such ambiguity is the mark of a fine ghost story.

In particular (and this only occurred to me after the event), a scene towards the end implies that Lucy might be in the deserted, locked library when an intercut scene shows her working on a painting in the local art gallery. When she leaves the gallery (which has no other visitors) she simply leaves her easel and paints where they are, which seems odd. Perhaps she’s in the library and only imagining that she’s in the art gallery then running through the night to the library? (This would also provide a get-out for day-night continuity problems in this scene!)

Less successful than the visions and physical manifestations is the recurring use of ‘something’s watching’ handheld POV shots of Lucy, tweaked into negative imagery and accompanied by indeterminate, breathy whispering. Lucy later confesses to feeling she’s being watched but for the most part she shows no reaction to this and it doesn’t really add anything to the film. Maybe one or two of these might add to the overall creepy frisson but the effect is overused.

Along the way there are all sorts of clues, red herrings, non sequiturs and distractions which add greatly to the overall sense of unease. Was the previous victim, Claire, actually found “disembowelled and drained of blood”? (Incidentally, I know it’s a common phrase in vampire stories, but I’m not convinced it’s actually possible to drain the blood from a body.) An old local newspaper headline questions whether Claire’s death was some sort of ritual killing, but if she was found as described, then obviously it was. There are also passing mentions of cults, of ouija boards, of dark arts. But are these real, or just jokes, or even just things that Lucy thinks she hears people mention in her increasingly fractured reality?

There’s also an antique charm which Claire found and fastened to her library keys, now in the possession of Lucy. Does this have significance, or even an occult power? Or does Lucy merely think it does? And - I really think this is significant - at one stage Gregory says that Claire "went mad" which Lucy picks him up on: "She didn't go mad, she was murdered." 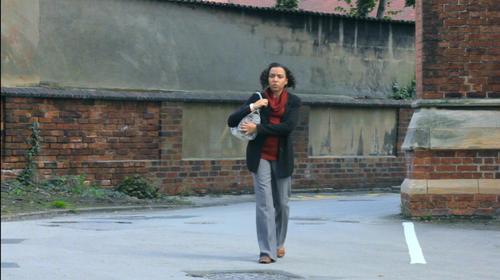 The Library definitely improves as it goes along and could benefit from some tighter editing in the first act. For example, we don’t need to watch Lucy pick out art materials, take them to the check-out and have her credit card declined in order to know she needs money. Just the credit card moment would suffice: two or three seconds instead of the best part of a minute that doesn’t really progress the plot. There is also an introductory voice-over which is presumably supposed to be a local radio report on Claire’s murder which should definitely be snipped. It’s not written like a radio report (far too dry and descriptive), plus the actress reading it is completely wooden. First impressions count and this makes the film look like it will be both badly written and badly acted, neither of which is true. More saliently, we simply don’t need to be told about the murder at this point. The story works much better if we find out later at the same time that Lucy does.

But by the second half of the film, things are progressing well with both plot and characters and indeed the final 10-15 minutes is genuinely scary and horrific, whether it’s happening inside or outside Lucy’s head. These scenes are helped greatly by the work of ace DP Matthew Thomas who uses a low blue light to achieve what many bigger productions singularly fail to do, which is show us clearly what is happening while convincing us that it’s actually almost pitch black. The sound design is also commendable, with clear dialogue and effective use of Samuel Allen’s music.

Truth be told, the film doesn’t really have an ending. I was initially disappointed by the lack of resolution and the pat epilogue but on reassessment, like much else in the film, this non-ending raises questions which actually benefit the story as a horror tale, feeding the ambiguity about what precisely is going on and how real any of it is.

My other slight area of disappointment was that the building itself never comes across as anywhere near the level of spookiness which is ascribed to it. And this is a real shame because Hall Cross Academy Library is a fine piece of gothic revival architecture designed in 1869 by Sir Gilbert Scott, the man who also gave us the St Pancras Hotel and the Albert Memorial. It has wooden beams, stained glass windows and a good number of memorial plaques, making it more like a church than a library, not to mention the assorted old antique volumes on some shelves. But hardly any of this is seen except briefly in establishing shots. A few insert shots of some of the gothic detailings would have added greatly to the film’s atmosphere. 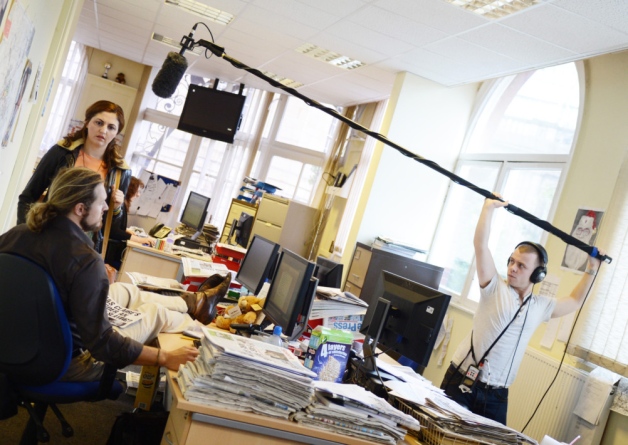 The above notwithstanding, I enjoyed Daljinder Singh’s debut feature and, crucially, have enjoyed it more the more I thought about it as I mulled this review over in my head (and indeed, sitting here typing the thing). The solid lead cast is ably supported by Leann O’Kasi (who was in an episode of Rab C Nesbit, credited here as Leann O Kasi) as Claire in flashbacks and a voice-over of a blog. Mention must also be made of Aimee-Louise McKee (credited as Aimee McKee) who makes a great role of Jenna, Lucy’s bubbly, extrovert friend, a part which in other hands could simply have been incidental and forgettable.

Faridah Rimmer (Four Lions, episodes of Emmerdale) and Stephen Bellamy (who played Nick Clegg on stage!) are college lecturers. Jay Martin (episodes of Silent Witness and Corrie) gives a suitably cold, calculating performance as a reporter for the local paper, helped by a location shoot in the actual Doncaster Free Press offices. Louella Chesterman is an old lady who may have clues for Lucy or may just be senile, and Jade Hamilton is the student in the epilogue.

JennyAnn Spencer-Parry (possibly JennyAnne or Jenny-Anne) designed the hair and make-up including some particularly icky injuries in the final sequence. Jessica Reed handled the costumes; I’m assuming she’s not the Philadelphia-based costume designer Jessica Reed only because The Library was entirely shot in Darlington. Phil Johnson and Joe Dawe are credited with VFX. Lincoln-based band The Lounge Crusade provide a song over the end credits. A company called Vista Films was involved with the post-production.

After a slightly shaky start, The Library proves to be a well-handled, eminently watchable, thought-provoking and spooky ghost story in the great English tradition. Worth seeking out – in fact, why not watch it here right now?