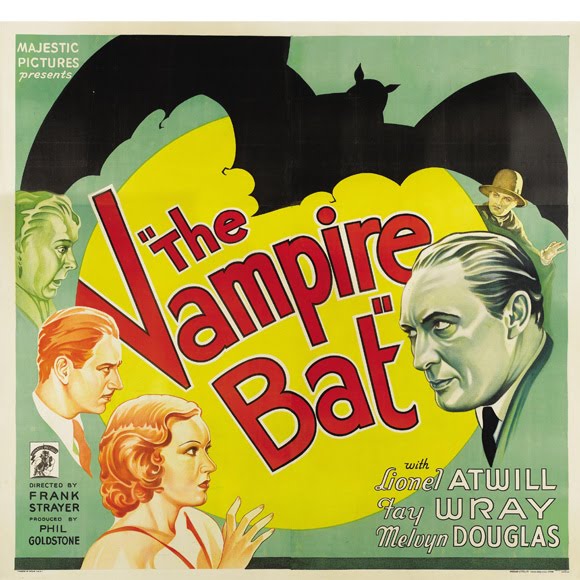 What a terrific movie. Let’s just take a look at that list of principal players: Lionel Atwill, Fay Wray and Dwight Frye. How can any film with a cast like that fail?

In a sleepy mitteleurope town, a series of murders have been committed; each victim was found, entirely drained of blood, with two small puncture wounds in their jugular vein. The locals suspect a vampire but Detective Karl Brettschneider (Melvyn Douglas) maintains a sceptical attitude, convinced that a more Earthbound killer is abroad.

Karl is enamoured of Ruth Bertin (Wray) who is the ward of hypochondriac comic relief Frau Schnappmann (Maude Eburne: The Bat Whispers, Return of the Terror, The Boogie Man Will Get You). For some reason that is never explained, Ruth and her aunt live with Doctor Otto Von Niemann (Atwill) who shares Karl’s scorn for the villagers’ superstitious beliefs. When Martha the local apple seller (Rita Carlisle, who was in both the 1931 and 1940 versions of Waterloo Bridge) becomes the next victim, suspicion falls on local simpleton Herman Gleib, played with full-on, bug-eyed intensity by the always reliable Frye. The town’s night-watchman, Kringen (moustachioed George E Stone: ‘The Runt’ in the Boston Blackie films and ‘Toothpick Charlie’ in Some Like It Hot) leads the clamour for Gleib to be strung up - and when he is the next victim, even Karl starts to believe that Gleib is guilty in some way.

A torch-wielding mob chases Gleib into a large cave where he falls to his death down ‘the Devil’s Well’. (Isn’t that...? Why, yes it is. Bronson Canyon! The most heavily used natural location in California, instantly recognisable from a million westerns and only slightly fewer horror and sci-fi pictures.) The mob were obviously pretty prescient in equipping themselves with flaming torches since it is clearly still bright daylight outside the cave.

While this is going on, the up-to-now avuncular and clear-headed Von Niemann is seen up to no good, using some sort of psychic hypnosis to control the distant movements of his manservant Emil (Robert Frazer: White Zombie, Black Dragons, the 1944 Captain America serial and scores of silent westerns) as he attacks the doctor’s housekeeper Georgiana (Stella Adams). The problem for the viewer here is that, more than halfway through the film, we don’t know who either of these characters are. Emil first appeared briefly - unnamed and without dialogue - in the previous scene with Von Niemann, Karl, Ruth and Frau Schnappmann; Georgiana has never been seen or even mentioned before, to the extent that I assumed Ruth’s aunt was the housekeeper. Emil brings the woman’s body down to Von Niemann’s lab where all her blood is drained off.

When Georgiana’s body is discovered, back in her room, Von Niemann tries to pin the blame on Herman Gleib but his theory suffers a setback when the Burgermeister (London-born Lionel Belmore, instantly recognisable as the Burgermeister from Frankenstein; he was also in Son of Frankenstein and Ghost of Frankenstein) arrives to announce that Gleib was killed two hours earlier. Von Niemann claims that Georgiana had brought him coffee less than an hour earlier, meaning that Gleib could not possibly be the killer, not even through supernatural means as his heart was staked in the cave, just in case.

Karl is thoroughly frustrated with fewer clues than ever as to the murderer’s identity so the Doctor advises him to get some rest and gives him some sleeping pills (from a jar clearly labelled ‘poison’ but with a small label underneath the poison warning reading ‘sleeping pills’). That night, Von Niemann sends Emil to bring him Karl’s body and we see a mysterious figure climbing across the rooftops towards the detective’s open window. Ruth sees the Doctor doing his psychic hypnosis schtick and realises that he is the murder so he explains to her what is really going on - and it’s a real doozy.

In his lab, Von Niemann has created life: not a hulking great monster but a pulsating blob that looks like a giant prune, sitting at the bottom of a tank of water. He is enormously proud of this, but it can only survive on a constant diet of human blood. Quite why he would need the full contents of a human body every 24 hours when he seems to add the blood to the tank using a pipette is just one of many inexplicable aspects of this brilliantly daffy scheme. Anyway, unsurprisingly Karl has not been poisoned and returns to rescue Ruth from Von Niemann, who dies at the hands of Emil for some reason.

This whole film is deliriously bonkers, combining almost every subgenre of the 1930s. Although ostensibly a vampire film, it is in fact a mad scientist picture (or becomes one halfway through) but also shows a clear influence from The Bat, The Cat Creeps and other ‘masked maniac’ thrillers. Emil prowls the town’s rooftops clad in floppy-brimmed hat and dark cape; in fact he can be seen briefly in the opening scene of Kringen patrolling the streets, something which I only noticed on a second viewing. After Georgiana’s death, Karl fears that the murderer, presumably Gleib, may still be in the house; this seems to be for no other reason that because that’s what normally happens in these films.

Atwill, best remembered as the police inspector in various Frankenstein sequels, is never less than terrific in anything. He and Wray starred together in three films within the space of a couple of years: Doctor X, Mystery of the Wax Museum and this one. The wonderful Wray, here sporting her natural brunette look, also made The Most Dangerous Game and, of course, King Kong around this time. Frye was midway between his two iconic roles as Fritz in Frankenstein and Karl in Bride of Frankenstein and had an uncredited role in The Invisible Man this same year.

Douglas makes a great leading man; there is real chemistry between him and Wray and his straight-faced mockery of the locals’ beliefs, together with his gentle ribbing of Frau Schnappmann, makes him a believable and likeable character. Although he appeared in dozens of films in the 1930s and 1940s, including The Lone Wolf Returns and Mr Blandings Builds His Dream House, Douglas didn’t return to the horror genre until shortly before his death in 1981, when he appeared in The Changeling and Ghost Story.

Also in the cast are William V Mong (who was in Benjamin Christensen’s House of Horror/The Haunted House and played Merlin in a 1921 version of A Connecticut Yankee in King Arthur’s Court - I wonder if that still exists), Harrison Greene (The Case of the Black Cat, Charlie Chan at the Opera, The Devil Commands, Dick Tracy Returns), Fern Emmett (The Mummy’s Tomb, Captive Wild Woman), William Humphrey (who was in some Lon Chaney silents and also played Napoleon in a 1909 biopic!), Carl Stockdale (Intolerance, Mad Love, Revolt of the Zombies) and Paul Weigel (Dracula’s Daughter, The Black Cat, The Great Dictator).

Director Frank Strayer had helmed The Monster Walks the previous year and would direct The Ghost Walks the following year. From 1938 to 1943 he directed fourteen Blondie films. Writer Edward Lowe had started out in the mid-1910s writing scenarios for films with great-sounding titles like The Devil’s Signature and The Mystery of the Silent Death before co-writing the Lon Chaney Hunchback of Notre Dame. Other credits include three Charlie Chans (in Paris, in Shanghai and at the Race Track), three Bulldog Drummonds (Escapes, Comes Back and ’s Revenge), two Houses (of Dracula and of Frankenstein), one Tarzan (‘s Desert Mystery) and one Sherlock Holmes (and the Secret Weapon). In a busy career, cinematographer Ira Morgan also lit The Unholy Night, Charlie Chan in the Secret Service, Mark of the Gorilla, The Cyclops and three classic superhero serials of the late 1940s: Superman, Batman and Robin and Atom Man vs Superman.

One reason that this film is so enjoyable, despite the creaky plot, is probably the contribution of art director Charles Hall who pretty much defined the look of early horror. His extraordinary CV includes The Phantom of the Opera, The Hunchback of Notre Dame, The Cat and the Canary, The Man Who Laughs, Dracula, Frankenstein, Murders in the Rue Morgue, The Old Dark House, The Invisible Man, The Black Cat and Bride of Frankenstein (not to mention One Million BC, various Laurel and Hardy films, Show Boat, Waterloo Bridge, East of Borneo and All Quiet on the Western Front!). Born in Norwich in 1888, Hall designed scenery for Fred Karno’s troupe and continued his association with ex-Karno star Charlie Chaplin over numerous films. He is credited here as Daniel Hall, possibly to disguise his involvement in a non-Universal picture. Because, despite the presence of so many Universal stalwarts, this was actually produced by the obscure minor studio Majestic Pictures, their only foray into horror.

The print on this Classic Entertainment triple bill is not in great condition though it’s perfectly watchable. However, it only runs for sixty minutes rather than the normally listed 71 (like the Classic Entertainment version of The Ape) but apparently no versions actually run 71, most being between 62 and 67 minutes. (There is a 74-minute version but it only manages that by randomly inserting obviously nonmatched footage from Hitchcock's The Lodger!) At several points the screen goes black for a few frames and the only reason I can think of for that is that the original source material, way back when, had a soundtrack on disc. That was a technique still in use in 1933 which required, in order for the synchronisation to work, that any frames damaged were replaced with the exact number of blank frames. 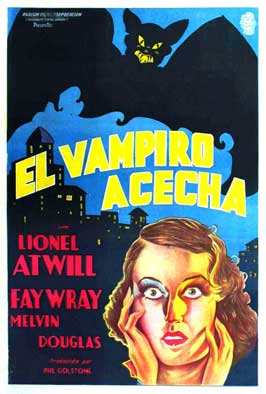 Despite its truncated running time and the scratchy, crackly print, I am extremely pleased to have finally had a chance to see this marvellous film which has instantly become one of my favourites. Atwill is outstanding, Frye is brilliant and Wray and Douglas make a wonderful screen couple. Even the broad comedy of Frau Schnappmann is tolerable: Maude Eburne is much funnier than the ghastly and irritating Una O’Connor who normally filled those sorts of roles.

There is some lovely direction, effective use of shadows, some impressive (for the era) camera movement. It’s a wonderful package which makes for one of the best 1930s horror films to emanate from a minor studio.