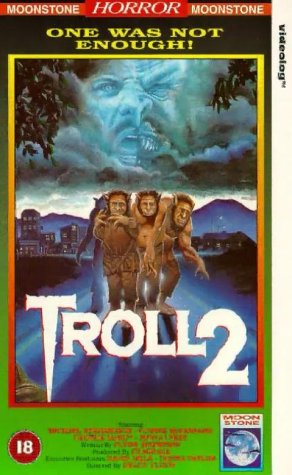 What, you want a more detailed review? Okay: Troll 2 is dreadful bollocks in every respect.

This film is misnamed twice: it is not a sequel to John Carl Buechler’s Troll, and it doesn’t even have any trolls in it! The little nasties here are explicitly and irrevocably stated to be goblins, and instead of Buechler’s prosthetic make-up and puppetry, we have midgets in papier mache masks with pingpong ball eyes.

Young Joshua Wait, played by the spectacularly untalented Michael Stephenson, is the sort of whiny, gee-whillikers American kid that just makes you want to reach into the TV screen and give him a bloody great slap. In a prologue apparently modelled on The Princess Bride, he is being read to by his Grandpa Seth (Robert Ormsby). 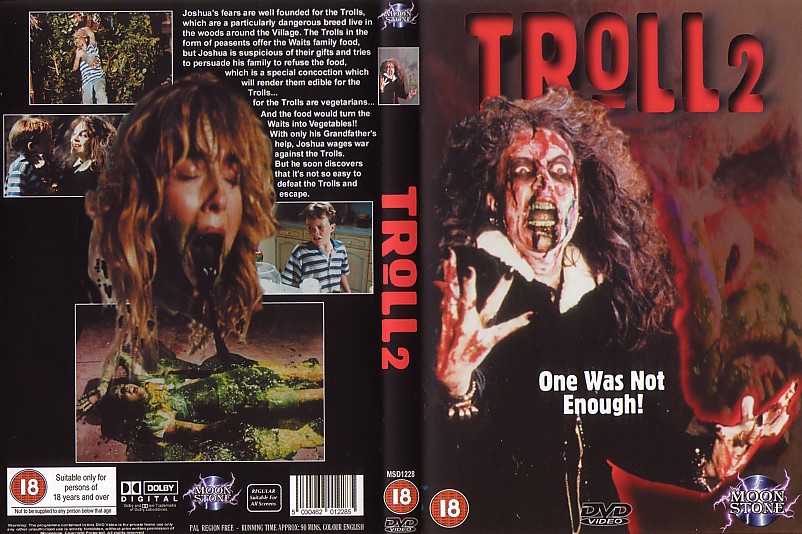 In Grandpa Seth’s story, Peter (Glenn Gerner) is being chased through the wood by some goblins and thinks he’s safe when he sees a beautiful girl, but it turns out that the goblins can disguise themselves as humans, and Peter gets eaten after all. When Joshua’s mother Diana (blank-eyed non-actor Margo Prey, who looks like she’s on drugs) enters his bedroom, we find that Grandpa Seth is in fact dead and the boy has just been imagining him. Or has he?

Michael Wait (George Hardy) and his family - wife, son and teenage daughter Holly (Connie McFarland), and four less talented, uglier actors you are unlikely to ever see - are doing a house-swap with the Presents family, moving from their nice suburban house to a little farm in the middle of nowhere for a week or two. Before they leave, Michael spells out exactly what lies ahead in a phone call to someone: “It’s called Nilbog. That’s right. N, I, L, B, O, G. Yes, Nilbog.”

That’s correct folks, they’re off to the sleepy hamlet of Nilbog (population: 26) and no-one comments until almost the end of the movie on the unusual name or what it says, spelled backwards. Presumably the Waits are related to all those people in old horror movies who are taken in by characters called Alucard or Dr Acula. Or perhaps they’re only going to Nilbog because they couldn’t find a guest-house in the little Welsh mining town of Llort. 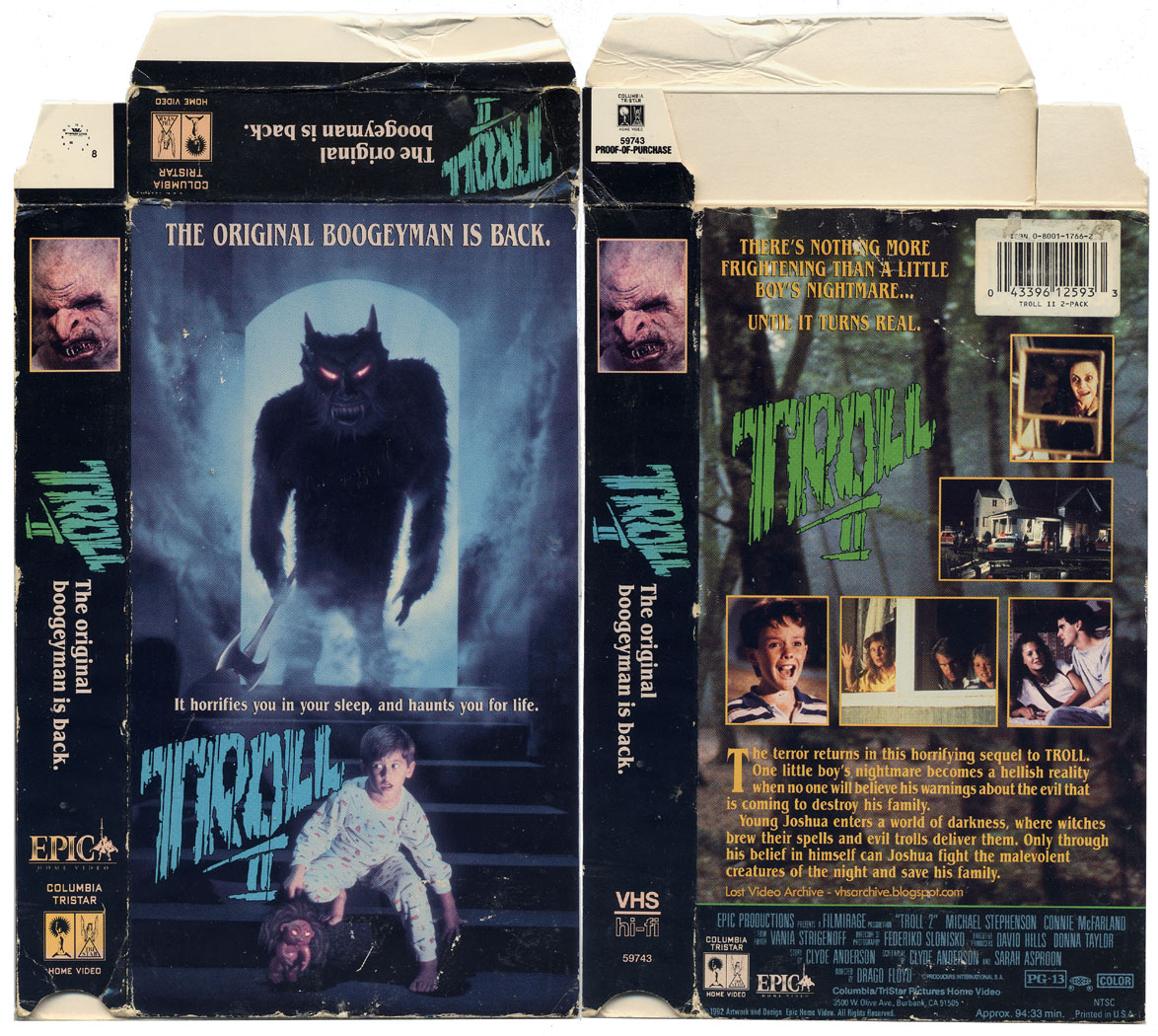 Now, Holly has an on/off boyfriend named Elliott (Jason Wright) who has the ultimatum of dating Holly or hanging around with his immature friends, nerdy Arnold (Darren Ewing), blond Drew (Jason Steadman) and making-up-the-numbers Brent (David McConnell: Bats - bloody hell, somebody who has been in another film!). Elliott was supposed to accompany the Waits on holiday but doesn’t show - that’s because he’s travelling separately in an RV with his pals.

After briefly meeting the oddball Presents family (the father is Lance C Williams - credited as L Williams - who went on to play Dracula in a 2003 half-hour short called Birth of the Vampire), the Waits find a sumptuous spread laid out for them in the dining room: “typical country hospitality”. But Grandpa Seth appears to Josh and tells him that the family must not eat the food, which frankly looks hideously unappetising as it’s all garish primary colours and looks like plasticine.

Freezing time briefly, Seth gives Josh only a few seconds to work out how to make sure that not a bite is taken. I expected the boy to yank the table cloth so that it all goes on the floor, but no, he stands on a chair and pisses all over the food! Whereupon he is sent straight to his room. 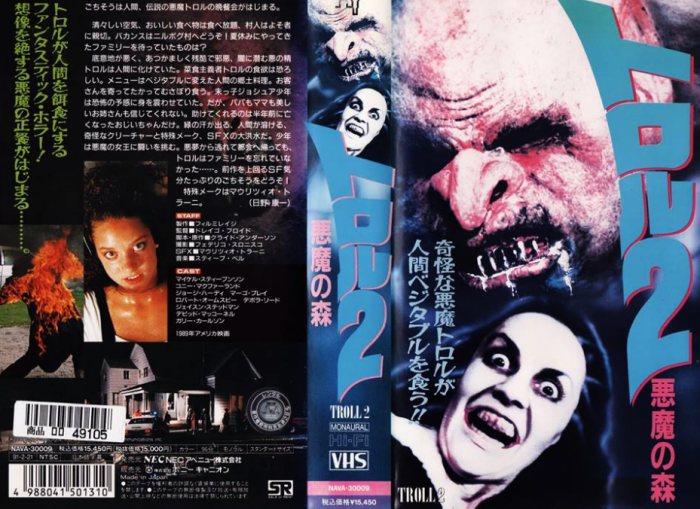 Nilbog itself proves to be populated by redneck extras even uglier and less talented than the featured players including Sheriff Gene Freak (Gary Carlson) a hellfire-and-damnation pastor (Mike Hamill) and a really scary shopkeeper (Don Packard). But the oddest person of all - and the only entertaining actor in the entire cast is weirdo, pasty-faced, panda-eyed, bespectacled lady Creedence Leonora Dru (Deborah Reed) who lives in a converted church in the woods.

To cut a long story short, the population of Nilbog - all 26 of them - are goblins in human form but they’re vegetarian goblins. So while they want to eat the Waits, they need to transform them into plants first, which they can do by persuading them to eat some of the disgusting looking food on offer (the only item sold by the town store is Nilbog milk, for some reason). Of course, Joshua realises this but no-one believes him, nor do they think he is really seeing Grandpa Seth.

Of Elliott’s friends, Arnold gets caught by Creedence and turned into a tree, Drew tries to rescue him (by pulling away bark that has been crudely glued to his face) and Brent gets seduced by Creedence back at the RV when she appears in a more obviously sexy guise, their lovemaking causing the vehicle to fill with popcorn for some reason. 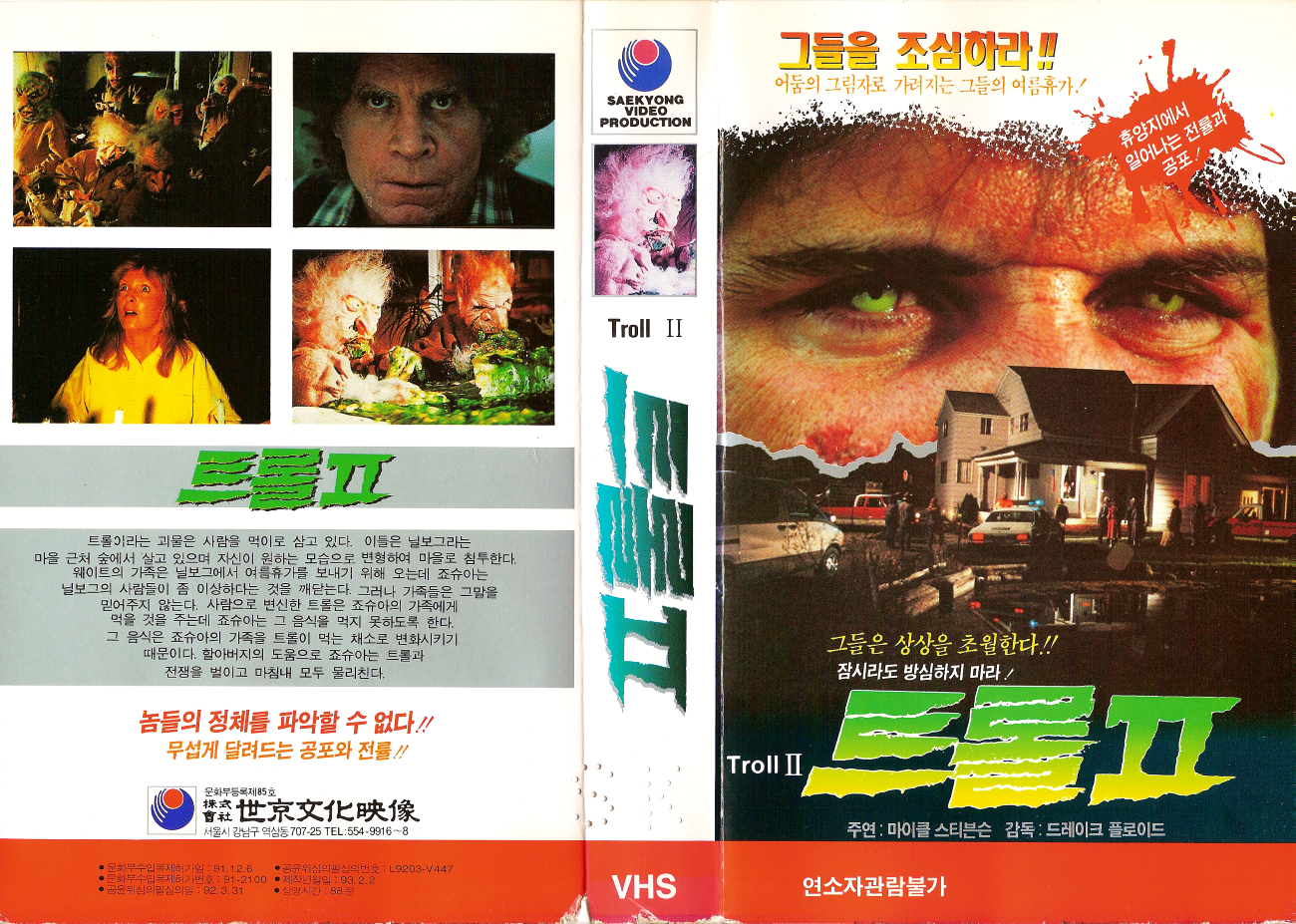 The Waits, plus Elliott, return to the farmhouse to find that the entire population of Nilbog has turned out to throw them a party, which basically involves everyone clapping along out of synch to the most irritating and bland repetitive ‘tune’ imaginable. Fortunately Josh and Grandpa Seth save the day using a combination of a molotov cocktail and a fire extinguisher which, if they had stopped to think about it, really cancel each other out. The pastor goes up in flames and is seen to be a goblin, and the family are then trapped in the house, though there is no explanation of why the goblins, who have all come outside, don’t simply go back in and attack them. Eventually they do this and Josh is somehow transported to Creedence’s house where she has a magical stone from Stonehenge(!) which looks about as convincing as the one that Spinal Tap used on stage.

Grandpa Seth has had to go for the final time - this is one of those films where lots of things ‘must’ happen but no explanation is given as to why - and leaves Josh a bag which he must only open when absolutely necessary. Surrounded by goblins (several of whom we have already seen die in the attack on the farmhouse), Josh successfully repels the vegetarian fiends with the contents of the bag - a double decker baloney sandwich! Then his family appear and destroy the evil little critters and their queen (Creedence, now a scary old hag) by touching the magic stone and concentrating, though nobody ever specifies what they should actually concentrate on. 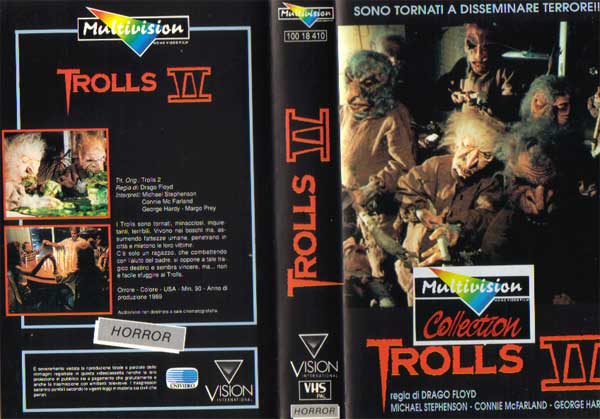 In an extraordinary epilogue that is as unpleasant as it is nonsensical, the family return home, but Holly, Elliott and Michael head for work/school without setting foot in the house. Diana goes upstairs for a shower, and Josh subsequently discovers the shower cubicle full of green slime, then runs downstairs to find the goblins (yes, the dead ones) stuffing their faces with goop from his mother’s naked, eviscerated body. Eh?

Filmed by Italians in Utah with a largely amateur (by the look of it) cast, Troll 2 is a cinematic car-crash - so horrible that you just can’t look away. With the exception of Deborah Reed (Creedence) and Mike Hamill (pastor), nobody on screen can act - and those two only get away with it by playing the whole thing like a Christmas panto. Among all these people who never made another film, probably the most successful performer in the movie is the girl who plays the disguised goblin that tricks Peter in the fairy tale prologue. Michele Abrams - credited here as Michelle - was in the original Buffy movie as well as Cool World, Junior and episodes of Lois and Clark and Murder, She Wrote.

Writer/director ‘Drake Floyd’ seems to be Claudio Fragasso (though some sources credit old Joe D’Amato himself, Aristide Massaccesi) who is no stranger to fake sequels. He wrote Zombie 3 (which at least was partially directed by Lucio Fulci) and directed After Death, which was released in the States as Zombie 4 (those two are available on British DVD as Zombie Flesh Eaters 2 and 3!). He also wrote and directed House 5 (yeah right - also ‘starring’ Michael Stephenson) and in 1989 beat James Cameron to the punch with Terminator 2 (aka Shocking Dark aka Alienators)! Other notable writing credits include Zombie Creeping Flesh (released at least once as Zombie 5 - oh, now this is getting ridiculous), a couple of Italian fake Emanuelle pictures (Violence in a Women’s Prison and Women’s Prison Massacre), Rats: Night of Terror, D’Amato’s 11 Days, 11 Nights and latter-day peplum The Seven Magnificent Gladiators. And he’s still directing. 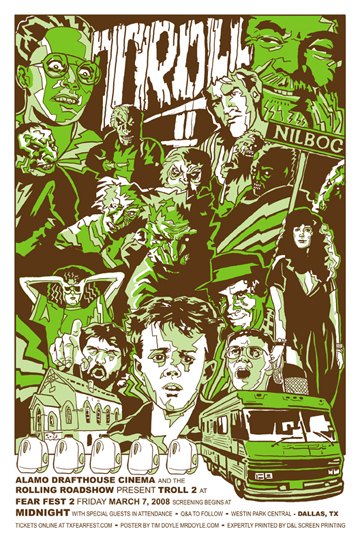 But the most extraordinary credit on display here is ‘costume designer: Laura Gemser’. Surely, I thought, that must just be an invented name but no, it seems that Black Emanuelle herself (also in such creaky Italian epics as Ator the Fighting Eagle) worked behind the camera on this film. She and Fragasso share several other credits, though it’s hard to see what costumes here needed designing apart from Creedence’s dress and jewellery. All the other humans wear shirts and jeans, and the goblins all wear rough sacking smocks.

Who on Earth can this film have been aimed at? Children and adults alike will find it equally unpleasant, although for slightly different reasons. It’s unalloyed rubbish which might have been forgivable in the early 1980s when anything could be released on video, but this crap was filmed in 1990. And why go all the way to Utah to make it?

Troll and Troll 2 have recently been released on a double bill DVD which has unfortunately raised the profile of this justifiably forgotten rubbish. Contamination Point 7, directed by 'Martin Newlin' the same year, was released as Troll 3 but has no connection with either of the first two films. That one actually was made by a pseudonymous Joe D’Amato which may explain the confusion over the identity of Drake Floyd.

[Addendum: Since I first posted this review, several years ago, Troll 2 has acquired an unexpected degree of infamy, not least because of its position as one of the absolutely lowest rated films on the IMDB. Cast-attended screenings, an extensive website and in fact a whole cult of Troll 2 has sprung up. Who would have thought it? And in fact, there is now a feature-length documentary all about Troll 2, called Best Worst Movie. And I'm in it!)
Posted by MJ Simpson at 23:08