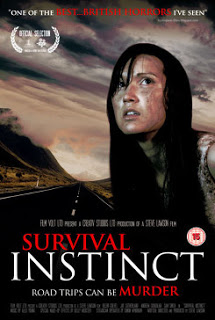 [NB. I saw a preview of this film under its shooting title of Rites of Passage. It was retitled Survival Instinct for its limited theatrical release before becoming Footsoldier on DVD. - MJS]

This is the first feature for some time from Steve Lawson, previously known for directing micro-budget actioners like The Silencer and Insiders (and not for directing stuff like Dead Cert and Just for the Record – that’s a different Steve Lawson). After some years in the corporate-video wilderness, Steve is back in narrative feature land with his first entry in the British Horror Revival. And it’s a real pleasure to announce that the wait was worth it. This is not only Steve’s best film by a significant margin, it’s also one of the best low-budget British horrors I’ve seen for some time.

At its heart, Survival Instinct is yet another film about a psycho with a hunting rifle chasing a pretty girl in a dress through deciduous woodland. It’s a prevalent subgenre, as we all know. But Steve manages to wring something new out of the set-up through the twin barrels of plot and character.

Andrew Coughlan is hard man Weaver, ex-con, keen hunter, keen to pass on his skills to son Rex (Sam Smith), a quiet lad torn between not wanting to take an animal’s life and his natural fear-induced obedience towards his father. Elsewhere, Helen Crevel is Stacey, on her way to a friend’s wedding in the Peak District where she is due to provide musical accompaniment on her valuable violin. And Jay Sutherland is Thom, giving Stacey a lift and carrying a torch for her but stuck in the friend-zone.

The set-up is that Thom’s car breaks down in the middle of nowhere and a terrible accident leads to a situation where Weaver needs to make sure that Stacey tells no-one about what she has seen. As a game of cat and mouse develops, Weaver becomes more and more obsessed, determined to track down and eliminate the troublesome girl.

It’s in the first act that Survival Instinct marks itself out as well above the common level of this sort of film. It’s easy to have a random girl spending random time in the woods where she crosses the path of a random psycho. Indeed, that pretty much sums up Steve Lawson's previous toe-in-the-water of the horror genre, his 1998 shot-on-VHS short Dead Lane, which has a similar initial set-up to Rites. The violin was a folder of confidential business documents, the 'pretty girl in a dress' was Steve himself in a slightly too big suit, and the psycho in that instance was a completely random serial killer guy.

But there’s nothing random here. Everything that Weaver does, he does for a reason. Admittedly, if he had just buggered off quickly there would have been no problem, but there would also have been no film, and the bloke had to make some pretty fast, on-the-spot decisions about what to do in an unexpected crisis, so we’ll give him that. With the above caveat, every action of Weaver’s – and Stacy’s – has clear, identifiable motivation. I’ve sat through so many films where characters do utterly stupid, illogical or inconsistent things for reasons which serve the plot but destroy the story. Not here. We can utterly believe these characters.

Stacy herself is no damsel in distress nor (thank God) some pot-smoking idiot teenager. She’s an intelligent and resourceful young woman, but without ever tuning into some sort of rural Ellen Ripley. There’s a fantastic moment when she looks like she might be turning the tables on Weaver but we, because as an audience we have a privileged view of proceedings, are nowhere near as confident as she is.

The film uses its locations well: the lonely country lane, the trees, the stream and its ancient bridge, an old garage and – in the third act – an unstaffed rural industrial estate which ably takes the cat and mouse game indoors. Throughout all this, Stacy keeps a hold on her (very valuable) instrument.

Crevel is simply awesome in the lead role, capturing the confusion, realisation, horror, hope and determination of an ordinary person suddenly facing an extraordinary, potentially lethal situation. This is her first feature though she has a lot of stage credits, including the lead role in the Nottingham Playhouse production of The Worst Witch. On the other face of the coin, Coughlan plays Weaver with just enough humanity (mostly around concern for his son) to make him something more than just a cardboard cut-out bastard.

Sutherland has less to do (for reasons which I don’t want to spoil here) but is thoroughly believable in the role. Cited by many as One To Watch, Sutherland’s feature credits include a brace of Jonathan Sothcott pictures: Simon Phillips’ Riot and Stephen Reynolds’ Danny Dyer thriller Vendetta. He was in acclaimed Arthurian fantasy short Arthur’s Lore and also made something called Zombie Defence for the same guys. More recently he has made upcoming British war/horror feature The Fourth Reich. And mention must also be made of Sam Smith’s vital supporting role, delivered with very little dialogue but a lot of facial expressions (for reference this is not the Sam Smith who is in Wondrous Oblivion, nor is it the one who was in Bane and The Witches Hammer). Glenn Salvage (Left for Dead, Underground, The Silencer) provides a telephone voice in one scene while Isabella Nash is the bride-to-be.

Simon Wyndham, who co-directed Insiders and The Silencer with Steve, provided some Steadicam assistance on his film. Kelly Webster handled the make-up effects, including a rather nasty foot injury. Leicester’s own Alex Young, who has previously scored various video games, was responsible for the brilliantly effective music which adds greatly to the tension.

And that’s the key word here: tension. This is a teeth-grindingly scary horror-thriller, frightening its audience through the fear of what might happen and the terror of the implications of such a thing coming to pass. I was absolutely delighted to be invited to the cast and crew screening at Leicester Phoenix in April 2014 and I have no doubt that Survival Instinct will do well at festivals and find itself a distributor.