I mentioned in my review of Devil’s Playground that most great British horror and fantasy films feature squaddies. That’s how we deal with monsters in this country. American response to any alien/supernatural threat usually involved a nuclear bomb or at very least helicopter gunships (remember the ones in Godzilla piloted by USAAF goons so dumb that they tried to escape the beast by flying horizontally among the skyscrapers instead of just, you know, flying higher?).

No, in the UK we have always solved every crisis thrown at us, throughout history both real and fictitious, by sending in one or more of the four absolutely best military forces in the world: the Royal Navy, the Royal Air Force, the Royal Marines or the good old British Army. In films, it’s usually this last lot, mainly because (I suspect) it’s easier to hire a couple of Landrovers than a Battle Class Destroyer or a squadron of Harrier jump-jets.

In the 1960s, there were squaddies in everything from The Quatermass Xperiment to The Night Caller. In the 1970s, the squaddies were mostly to be found on TV, helping the Doctor and the Brigadier defend the Earth against a succession of alien invaders. The ‘80s and ‘90s were a fallow period for squaddie-vs-monster stories but then they were fallow for SF and horror generally in this country.

Devil’s Playground managed to somehow forget to include zombies although there was a Royal Navy destroyer off-screen somewhere, heard over the radio. But never fear, because at the same Day of the Undead zombiefest where I caught Jonathan Sothcott’s film there was a screening of Zomblies. Which I missed. But the film-makers gave me and Jonathan screeners to take home and watch. Which I did. And you know what? 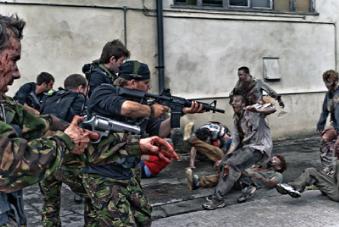 Zomblies is absolutely freaking great. Not just that, it’s: all squaddies, all the time! It’s the most squaddietastic British horror film you’ll ever see. That’s the one to give the troops!

It’s also about 50 minutes long which makes it a really odd length, but we’ll come to that later.

The story is simplicity itself. There’s civilisation and there’s the deserted, mostly unurbanised land where the zombies dwell and inbetween these is a bloody big wall. And occasionally, teams of squaddies are sent over the wall to do... something or other. Recce missions probably.

A prologue showing us the last moments of one such expedition is filmed with such realism that, taken on its own, it could easily be mistaken for an army recruiting advert. The film proper isn’t quite so gritty, which disappointed me slightly, mainly because some of the acting isn’t quite up to scratch and that can’t help but pull us out of the world we’re viewing. Suspension of disbelief is required, of course, isn’t it ever? But that prologue doesn’t require suspension of disbelief, it grabs your disbelief by the scruff of the neck and flings it out of the window.

The main part of the film concerns the troop of squaddies sent to find the troop that went missing in the prologue. Are they all dead or is it just that their radio has packed up? There’s some decent characterisation among the half-dozen soldiers, most memorably the big silent bloke with a big, gay moustache who carries big fuck-off guns. There’s also some military brass in a high-tech HQ behind the wall overseeing the operation.

And there’s zombies sir - ‘undreds of em. Fast-moving, injury-ignoring, chomp-yer-throat-out zombies. They’re among the trees, they’re in the buildings. They’re everywhere. Having located the survivor(s), the squaddies just have to get out of there and back to the wall, while avoiding being eaten. And there’s the usual stuff you expect - someone does get bitten: should they kill or leave or take with them? - and there’s stuff you probably don’t expect. The point is that, whether it’s generic zombie action or clever, character-based plot developments, it’s all done extremely well.

What really stands out, especially in the scenes that take place in some abandoned industrial buildings, is that Zomblies is very, very influenced by video games - but in a surprisingly good way. I’m not a video game player myself but there were several consoles set up at Day of the Undead where people were blasting away at the living dead so I know what these things look like even if I don’t care what they’re like to participate in.

And Zomblies captures this stylistic je-ne-sais-quoi, this kinetic, digital post-modernism perfectly yet without sacrificing its cinematic, narrative roots. Without which (let’s face it) the film would be as boring as actually watching somebody play a video game. Hollywood has made many attempts - mostly unsuccessful - to turn games into movies but their usual tactic is to ditch the game-y stuff and concentrate on expanding and developing the situation and characters. Zomblies is the first film I have seen which takes the diametrically opposite approach. Instead of co-opting characters and situations from games and trying to make them cinematic, it takes the characters and situations of an original film and makes them game-like.

The synopsis in the press pack reads thus: “When a private militia’s rookie zombie hunters send out a distress call, it’s up to the Rangers to cross The Wall and bring them back, as well as uncover the truth about a terrifying new breed of zombie.” To be honest, I’m not sure this all comes across in the film. I didn’t realise that the folks being rescued were ‘a private militia’s rookie zombie hunters’ nor did I get a real sense of the zombie threat having changed in a significant way. Zombies is zombies. Not that this impaired my enjoyment at all, on the contrary I think this is one of the best zombie films I have ever seen.

But it does only run about 50 minutes which is a terribly inconvenient length. It’s much too long for a short but it’s not long enough to be a feature. Which is a real shame because this film desperately deserves to be seen. In terms of commercial release, the two options would be to pair it with something running 30-40 minutes as a sort of buy-one-get-one-free anthology picture or to expand the film by at least 20 minutes. And given that there are aspects of the background which simply don’t come through, there’s clearly room for expansion (if the budget can be found).

A final interesting note on the story is the coincidental similarity between the ending of Zomblies and the start of the third act of Gareth Edwards’ Monsters which I saw after watching Zomblies but just before writing this review. One giant, futuristic wall is going to look much like another I suppose and there’s certainly no suggestion, or even possibility, that either film could have influenced the other. It’s just synchronicity. If anything I preferred the Zomblies wall which is completely devoid of gaps or doors and has big robot guns all along the top. When our survivors reach the wall, they have to climb, ramping up what is already a frenetic and powerful story into a jaw-dropping climax.

Finding fault would be picky although you really do have to wonder why anyone would patrol this wasteland on foot. You know, God gave us helicopters for a reason. These aren’t the Taliban, they don’t have second-hand rocket launchers. They’re zombies. You can pile into your Merlin or Chinook, drop into the combat zone, do what you have to do and get the hell out of there with complete impunity, providing there’s no trigger-happy, friendly-fire Yanks supposedly fighting on your side. 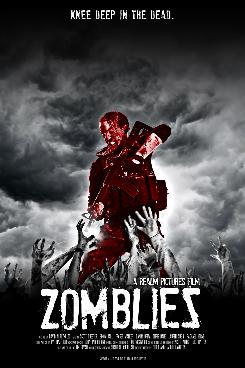 And no, there isn’t a huge amount of plot but there’s some, there’s enough. We’ve all seen zombie pictures with less plot than this. Anyway, it’s a calling card - and a very, very impressive one too - for director David M Reynolds and all his cast and crew. These include cinematographer/editor Eve Hazelton (Robbing Peter), composer Rob Westwood (It’s a Wonderful Death, Born of Hope), stunt co-ordinator Mark Ruddick and production designer Shahriar Abdullah. Christopher Dane (The Butterfly Tattoo, Dark Rage) is the only cast member with any sort of cinematic CV.

Zomblies premiered in March 2009 and received its second screening a few months later at Day of the Undead. I’m sure it’s only the unusual length which is stopping it from playing more festivals, where I have no doubt it would go down a storm.

For most of Zomblies’ cast and crew this was their first (or first significant) film. But it won’t be their last because just being able to say “I worked on Zomblies” will be an accolade to wear with pride in years to come.