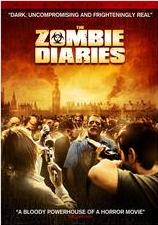 It’s eight years since The Blair Witch Project was inflicted on the world and still the vogue for movies constructed from faux camcorder footage continues. Just last month I found myself reviewing Vampire Diary and now here comes The Zombie Diaries. Next month expect a review of Video Journal of Dr Jekyll and after that probably Frankenstein’s Blog.

Of course the one problem with this subgenre is that it requires the viewer to accept the conceit that, whatever happens, the person with the camcorder never drops it. Sure, you can have the odd crazy-shaky sequence of them running but really, any sensible person would just throw the damn camcorder away and run like bloody hell.

The Zombie Diaries actually has three diaries, the first being filmed by a member of a four-person TV news crew who drive out of London to interview a farmer in a Home Counties village. The background to the film is that a ‘virus’ is spreading from Asia across Europe in a clear parallel with avian flu. In fact there are some vox pops of people which left me wondering whether they were indeed talking about bird flu. 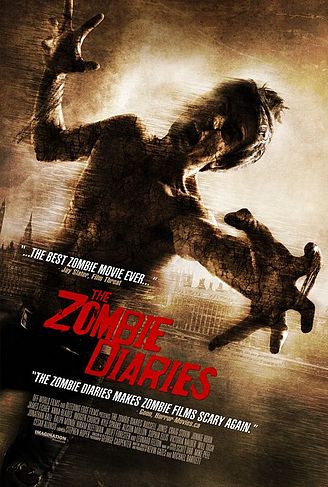 Anyway, the TV crew get out of London just as parts of it are sealed off and find the village deserted. Breaking into the farmhouse, they find a dead body and a blood-caked, cadaverous figure standing over it.

Now zombies used to be zombies. They were dead, they got buried, they came back to life, they crawled out of the ground and they shuffled towards you, possibly moaning “Bwaaains!” But since 28 Days Later zombies are infected living people too and it’s not really obvious from the film which these are. There’s all this talk about a disease but there is also talk about “dead things”, though no usage of the Z-word. The film’s publicity says that when people die from the virus they come back to life as zombies but this isn’t clear from the film itself.

The second diary is three people on a scavenging expedition to a village, breaking into shops looking for food and other useful items while trying to avoid the shuffling hordes. Then the third and longest video diary concerns a group of survivors holed up in a farmhouse, regularly blasting zombies as they approach and occasionally going off to forage for food. By this point the whole infrastructure of the country has collapsed, including the National Grid, and everything that happens after dark does so by candlelight. Which does make one wonder how the video camera is able to continue working, but maybe the guy who carries it collected a huge supply of batteries from somewhere.

It also makes you wonder who he thinks is ever going to watch his footage, and on what. 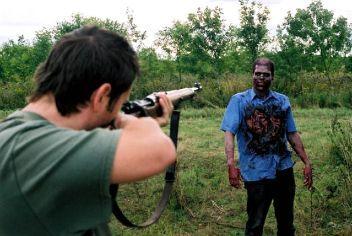 We’re allowed to get to know these characters more than the others but where the film gets really interesting is when we realise that the three diaries are starting to cross over. In fact there are sort of four because there was a prologue about some soldiers. It is a well-established fact that all great British horror movies feature squaddies. The film’s denouement is really rather shocking; it has little to do with zombies and more to do with people and that’s the only hint I’ll give you because I don’t want to spoil the film for you. I will say that I found it effective and consistent.

Michael Bartlett and Kevin Gates shared not only writing and directing duties but producing and editing too. Gates studied film-making at college and has produced and directed a range of notable indie genre efforts including Earthbound, Shattered Lands, The Unseen and the Svankmajer-esque Insect Noir. Michael Bartlett is not the scriptwriter of that name whose credits include Jackanory Playhouse, Dramarama and The Archers. This Michael Bartlett is an enterprising young chap who, starting from scratch - no experience of film-making whatsoever - has documented his progress towards making a feature film. Since November 2001 he has been documenting his progress on his website Makingthefilm.com. For him, The Zombie Diaries is the culmination of six years of hard work.

The cast, most of whom acquit themselves with commendably naturalistic acting (some of it improvised), include Jonnie Hurn (Penetration Angst, The Sick House), James Fisher (Hellbride), Russell Jones (who was in an episode of Torchwood), Craig Stovin (The Unseen), Anna Blades (who was in the shorts The Demon Within and Speak No Evil), Sophia Ellis (who had a bit part in Alien Autopsy), Jonathan Ball (not the recently deceased American actor, despite what the Inaccurate Movie Database thinks), Kyle Sparks (who was in a Doctor Who fanfilm), Victoria Nalder (who has since moved to LA and reinvented herself as Victoria Summer) and Ralph Mondi (who played Peter Townsend in a TV drama about Princess Margaret). Leonard Fenton (Dr Legg from EastEnders) appears as the TV news producer at the start of the first diary; he was also in Morons from Outer Space, Hammer's The Devil-Ship Pirates and dodgy British martial arts flick Underground.

The somewhat guerilla nature of the production means there aren’t too many crew credits. Special effects are credited to Mike Peel (The Unseen, Dead Wood, The Scar Crow and contributions to Casino Royale, V for Vendetta and Evil Aliens), Scott Orr and Cesar Alonso.

The nature of the film means that there’s not really scope for explanation, showing us what is happening, which is why using the standard Romero-esque zombie plague was probably a good idea. There’s a cinematic shorthand here: we know what zombies do, we know how to kill them, we don’t need to be told. But what is really interesting is that The Zombie Diaries is not the only cinema non-vérité movie using Romero-esque zombies. Romero is making one himself! 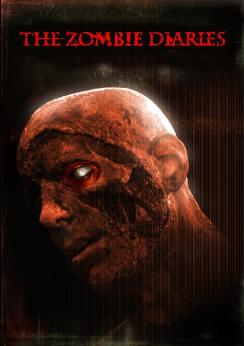 As yet unreleased as I type this, Diary of the Dead is Romero’s follow-up to Land of the Dead. But whereas the existing four films in the series are sequential (if not actually sequels), this new one will go back to the timeframe of the original Night of the Living Dead, with the zombies just starting to become a threat.

Zombie Diaries (as it was slightly retitled for its US release) has been in development long enough that it cannot be considered a rip-off of Romero’s film, although I fear that may be how it is viewed in years to come by people who don’t bother to check exact release dates. This would seem to be a simple case of parallel development. As observed at the top of the review, faux video diaries are still very much in vogue and it was only a matter of time before somebody applied this technique to the always popular zombie subgenre.

I don’t know what Diary of the Dead will be like - no-one has seen it yet - but The Zombie Diaries is a well-made, interesting and enjoyable slab of serious zombie horror and well worth seeking out.