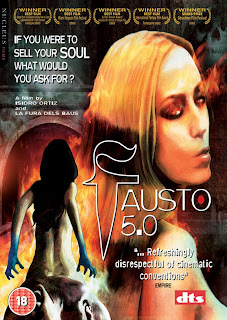 I had been wanting to see this Spanish movie for ages, knowing that it won the Golden Melies Award. So imagine my delight to find that it was playing Leicester as part of the BFI’s ‘Viva - the 9th Spanish Film Festival on Tour’.

Now here’s the question: is it SF, is it fantasy, is it horror? Well, here’s roughly what it’s about. Argentinian-born Miguel Angel Sola plays Dr Fausto who specialises in terminal illnesses. He travels to Barcelona - a slightly futuristic trashpunk city - for a medical conference and bumps into a man named Santos Vella (Eduard Fernandez) who recognises him. Vella claims to be an ex-patient from whom Fausto removed a stomach tumour before giving him three months to live eight years previously.

Fausto is an uptight, overly serious type while Vella is relaxed, cocksure, outwardly friendly but deeply, deeply annoying (to Fausto). He insinuates himself into the doctor’s existence during his short time in Barcelona and gradually his influence becomes more and more persuasive.

Of course Vella, with his goatee beard and uncanny ability to keep popping up wherever Fausto goes, is the Mephistopheles character here. Gradually it becomes clear that Vella is making Fausto’s wishes come true, but in sometimes vague and sometimes unpleasant ways. But is he actually exerting any supernatural powers, or is Fausto just paranoid? Or both? 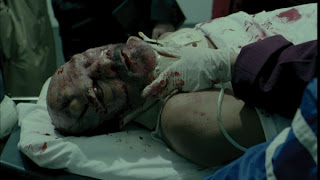 The moral is, of course, ‘be careful what you wish for - it may come true’ but this simple idea is given a wonderfully complex and original spin, especially as Fausto starts finding wishes coming true which he didn’t realise he had actually wished for. The whole film is laced through with a delicious black humour which I have seen in other recent-ish Spanish genre pics like The Day of the Beast and The Ugliest Woman in the World. At one point a comedian telling sick medical jokes to a room full of medical conference delegates has a heart attack on stage - and everyone applauds!

Sola and Fernandez are both superb and it’s no wonder that they tied for the Best Actor award at the 2002 Fantasporto. The other major character is Najwa Nimri (Abre los Ojos) as Fausto’s assistant Julia. The whole film is full of startling images: an entire hotel wrapped in shroud-like cloth, a dog chewing on a live person’s entrails...

Directors Olle and Padrisa are the fringe theatre group La Fura dels Baus and this led to a lot of people missing this film when it toured UK as part of a Spanish movie package. Most cinemas only printed the first paragraph of the accompanying blurb, suggesting that Fausto 5.0 was some sort of arty alternative thing, when it’s actually a hugely enjoyable horror/fantasy romp.

Is it actually science fiction? It seems to be set in the very near future and the city of Barcelona exhibits some extreme poverty (there is also an obsession with trains being scrubbed scrupulously clean before travelling from one city to another). I got the impression that this is what Europe is like while America has turned into Blade Runner. 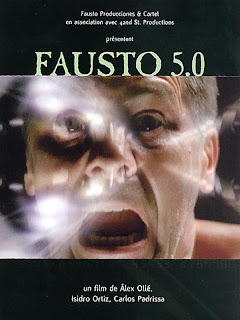 Director Padrissa says on the movie website: “Fausto 5.0 is set in a multiracial Barcelona, where the signs are in different languages and different cultures live together. It is a hypothetical future that does not take the form of science fiction." His colleague Ortiz reckons: “Fausto 5.0 is a psycho-thriller set in an indeterminate and undefined time, in which aesthetic elements from the past alternate with an imagined future. However, it could all be happening in our time.” So now you know.

And the title? It’s ‘5.0’ because this is the fifth version of the Faust legend which La Fura dels Baus have produced, though the others were for the stage and much closer to Goethe’s original.

MJS rating: A
review originally posted before November 2004
Posted by MJ Simpson at 20:04