Here is an unpublished interview with Robert Scott Field, the Japan-based, American actor who played Android M11 in Godzilla Vs King Ghidorah. Mr Field very kindly granted me this interview when he was a guest at the wonderful G-Fest convention in Los Angeles in 1999. 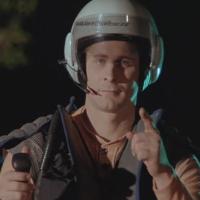 How did you get the role of Android M11 in Godzilla Vs King Ghidorah?
“I went to Japan as a baseball player professionally, and it didn’t work out. It’s a very long story so I’ll just say it didn’t work out. But while being there I happened to teach a little bit of English at a school over there, and a famous Japanese comedian wanted to learn English, so I taught him. And then I worked in radio, and then I worked on another radio show, and one of the other guests who was on the show with me was Mr Kazuki Omori, who is the director of Godzilla Vs King Ghidorah. At the time, because we did this radio programme together, he liked me and he wanted to put some foreigners into his movies. But just because I knew him didn’t mean I had the part. I had to go to an audition in Tokyo and at the audition they had me run, they had me lifting, they had me do a lot of things. They said, ‘You’d be perfect for the android part.’ And it just started from then. At the beginning, M11 was really not that big a part either, but as one of the scenes went really well, they said, ‘Hey this is great. We have to use him for some more.’ I got a very big script and a lot of lines and a lot of action scenes and it just went from there. It got bigger than life, actually. It was great.”

Had you done any acting before?
“In Japan I’d done a little bit in a few plays over there. I picked up Japanese fairly fast, so I’ve done a couple of comedy shows with Japanese comedians, and a few other things. But Godzilla was my first big break. So not very much at all, actually, but it just started from there.”

Is there a pool of westerners that the Japanese call on?
“There are about five really famous foreigners in Japan. One of them’s from Africa, and I think the other three or four are from the United States. I think they’re pooled into the same agency; I am not. I live in Osaka, which is about three hours away by bullet train from Tokyo; it’s the second largest city. So I’m not completely national yet. Saying you’re very big somewhere isn’t really good, but I’m fairly well-known in Kansai which is Osaka and Kobe and Nagoya and places like that. So I’m very well known there. I’m working to go national, and I’ve done a few television programmes that are national, so people know me from all over. But I’m pretty much freelance myself, I have my own agency now, and you just work from your connections that you get through different associations. That’s how it’s happened for me.”

How familiar were you with Godzilla when you took this role?
“As a child I loved Godzilla and in fact I thought he was an American monster when I saw that first movie. So I was really worried about it when he fought King Kong because I found out he wasn’t an American monster so I wasn’t sure if I was supposed to cheer him on when King Kong was American! But I heard a lot of people who did the same thing, so I felt better about that. But yes, I’ve seen him since I was a little kid. I haven’t collected as many toys as everybody else here: this is really amazing - to see all the toys everybody is buying. But I’ve loved Godzilla ever since I was a kid; never thought I would be in a movie but I really feel good about that.” 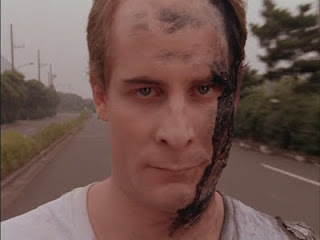 Had you seen some of the new Godzilla films from the 1980s?
“Yes, I’d seen some of them. In fact I think I saw Godzilla Vs Biollante before I was even in his movie. So I’d seen what Mr Omori had done before. In fact I like Godzilla Vs King Ghidorah best of all; not because I was in it but just because it had story to it and the action was good. I thought it was a very nice movie.”

Did you get to watch any of the special effects sequences being shot?
“Yes I did. I got to see how they handled King Ghidorah - all the ropes that they have on him for the wings and the heads and the tails and everything else. It was a piece of work, it was really nice. Nowadays, they use some computer graphics and stuff, but still for a lot of their basic shots, they have - I don’t know - 15 or 20 people working on it at one time sometimes. Which is amazing - all that teamwork they have to go through.”

Did you dub your own voice?
“Not for the English version, no. I don’t even know who dubbed my voice. In fact, I didn’t even see the English version until about two months ago when somebody sent me the tape from the States. I wasn’t even asked to do it. I guess somebody else just decided to put it out. It’s an English voice, it’s not even my voice. It was kind of funny watching it. But in the actual movie I’m speaking Japanese and English at the same time, so the new voice is not mine.”

Some of your dialogue was in English?
“Yes, for example, ‘Time warp engaging now,’ or something like that, then throw out some Japanese. Simple English that Japanese people would understand. Then because I was an android I spoke like an android, a little bit stiffer than most of the humans. But apparently they seemed to like it very much.”

For some sequences your running is speeded up.
“In fact, to speed up my running they told me not to run as fast but to run in longer leaps so it looked like I was running faster when they speeded it up. So I did my best and that turned out pretty good too.” 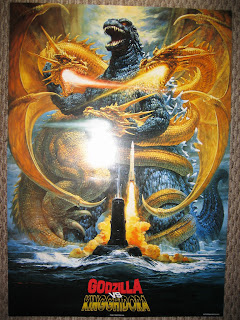 Were you involved in promoting the film?
“Yes, I was. I went to all the previews, signed autographs for many, many hours at a time. I wore a Japanese kimono and they seemed to like that too. At the beginning they didn’t even know who I was. When they showed the preview, we did our part before some of them and after some of them too. So when I went to one where they’d seen the movie and then they saw that I was M11 they really got a big kick out of that. They just loved it, and I was signing autographs for three or four hours at a time before they had to make me quit. It was excellent, I was in heaven, it was just a lot of fun. I never thought I’d be famous in Japan.”

Godzilla Vs King Ghidorah has a really complicated time travel story. Could you follow it?
“When we were making it, I read the story so I could basically follow it that way. But as we were filming it, because we were filming out of order, I didn’t understand a lot of what we were doing. When I finally saw it I understood pretty much what was going on because I do speak Japanese, I understood what the Japanese actors and actresses were saying. So I basically picked it up but it was a little bit difficult at the beginning. You basically need to see it twice to understand it more.”

Did the Japanese cast and crew accept you, or were you seen as a bit of a novelty?
“At the beginning, I think most of the foreigners were a novelty. But in my case I speak Osaka dialect and it’s very big in Japan right now. Although we filmed most of it in the Tokyo area, they got a big kick out of my Japanese dialect. So we got along great from the very beginning. I would throw out jokes here and there and they would laugh about it. Mr Omori, who is also from Konsei, which is also in the Osaka area, he and I have got on very well ever since we did a radio programme together. So we’d throw jokes at each, and it worked out very well. They took me right in; I think if I was only a novelty it would have worn off after a couple of days, but we seemed to get along for the whole three and a half months that I filmed.”

That’s a hell of a shooting schedule.
“I wasn’t on every day, though. They had a lot of other things going on. But yes, it spanned over about three and a half months.” 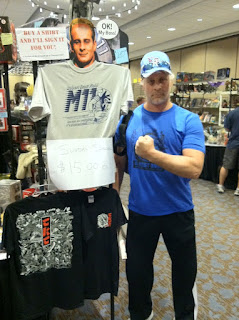 What effect has this had on your career?
“I’ve been in one TV movie, and two other movies for the movie theatres. It’s done me well; it’s started something. In fact, I thought it would be a lot bigger than that actually, but a lot of people have forgotten that I was in a Godzilla movie until you remind them sometimes. The children all remember me but the adults don’t remember me all that well. But it did start me in a good direction, so now I’m doing radio and TV and lectures all over Japan. So it’s helped my career, given it a boost.”

Did they ever do an M11 toy?
“They were thinking about it, but apparently they didn’t get round to it, because I haven’t seen any. In fact, they were thinking at the time, because my character was so popular, they were going to make a TV series out if it, and probably not even base it on Godzilla Vs King Ghidorah. Just make an M11 series. And they started it but apparently, because the economic bubble had just burst in Japan, they never had the money or the funding to do it. So it never came around. But there’s always talk that it may happen sometime in the future. It would be nice - I’d love the job!”