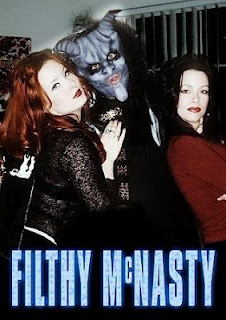 Although Goethe doesn’t actually receive a credit, this is essentially yet another version of Faust. Nothing wrong with that - it’s one of the most powerful themes in fiction, and can always be told anew, especially when it’s done as entertainingly (and cheaply!) as this.

Low Budget Pictures is the Ronson’s Woodseal of production companies - it does exactly what it says on the tin. The demonic Filthy McNasty (or ‘Phil’ as he is called throughout, suggesting he may be related to Dilbert’s ‘Prince of Insufficient Light’) himself is quite impressively made-up (although in one profile shot you can, rather bizarrely, see in one of his eye-holes and out the other!) and played with delicious bass-voiced civility by Tim Ekkebus. He grants, via a sexually confused high school nerd, the wish of two dorkettes (Miss Kitty and, wouldn’t you know it, Debbie Rochon) to become cool, sexy babes. This they achieve by changing their clothes, removing their glasses and hair-clips, and adding a touch of lippy. What, you expected some sort of morphing sequence? This is an LBP production!

That night, the babes get on down at the cool kids’ party (and yes, as per every American high school movie ever made, not one of the ‘kids’ is under 26, except that this time the film-makers know it). Among those in attendance is Teen Ape (“as himself”), an ultra-hip, wacked-out monkey-man who is simply a white guy wearing a gorilla mask (you can see the elastic, for God’s sake!) and hairy hands. Phil is also in attendance, killing off party-goers in a variety of sexually gross ways. But the day is saved by the sudden, inexplicable appearance of an all-powerful, jive-talking old guy with Don King hair, called Bonejack, who commands Phil to leave.

Filthy McNasty makes no sense whatsoever and does so gloriously. The pace is so fast (it’s only about 45 minutes long) that one can forgive the numerous in-jokes, and it never descends into self-indulgence. And for all the paltry budget, the skill is evident in the camera-work, lighting, editing, etc. - as is the fun.

The movie is included on Tempe’s limited edition DVD of Dead and Rotting, which is a very commendable idea. For the viewer, it’s another in the list of extras, contrasting sharply with many major studio DVDs which have a trailer and ‘scene selection’ as their only extras (like advertising a car as having wheels and a windscreen!). Time was when a trip to the cinema always netted you a supporting feature, and Tempe have effectively revived that idea. Except that their main feature is already a B-movie, which I guess makes LBP’s film a C-movie (actually, it’s probably near N or M, possibly even further down the alphabet, though it’s certainly not a Z).

More pertinently, this gives the LBP crowd a chance to have their work seen by people. When I originally wrote this review I said that I wouldn't expect anyone except the film-makers' close personal friends and the Debbie Rochon fan club to even consider paying good money for something like Filthy McNasty, but the subsequent success of this and other LBP films shows how much I know!

MJS rating: B-
review originally posted before November 2004
Posted by MJ Simpson at 09:41