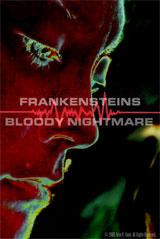 Frankensteins Bloody Nightmare - and no, there’s no apostrophe but that may be deliberate - is either completely brilliant or absolute shite. The fact that I can’t actually tell which it is leads me to suspect that it’s a work of genius, since shite tends to be fairly clearcut and easily identifiable. But still, there’s a nagging part of me that says this is a load of pretentious art student twaddle. And another part that says that’s just because I didn’t understand it.

This may well be the least comprehensible film I have ever reviewed on this site. I understood what was going on less than I did when I watched Ansatsu - and that was in Japanese. I can’t even begin to approximately describe the plot or scenario or characters or anything. I’m no more able to synopsise this film now than I was before I started watching it.

There are three barriers to following what is going on in Frankensteins Bloody Nightmare. One is visual: the whole thing has been deliberately shot in very low light. Many of the shots are complete darkness with only one or two things or areas illuminated (usually through a coloured gel). Sometimes the lighting set-up is such that we can only see part of what we’re looking at so we can’t actually tell who/what it is. Occasionally this is combined with extreme close-ups to create almost abstract images. And some shots are heavily polarised for some reason, possibly because they are somebody or something’s point of view.

Adding to this is the extreme graininess of the image. This was evidently shot in 8mm. The titles claim the movie uses the ‘Cinechrome 70 Bio-Color Process’ and a quick Google for ‘cinechrome’ reveals it to be a brand of Kodak 8mm film. However, although there is Cinechrome 25 and Cinechrome 40, there does not appear to be such a thing as Cinechrome 70. Go figure. Cinechrome 40 is “a fine-grained daylight color reversal movie film which captures your subjects in the most life-like color with the sharpest detail” - which this stock certainly doesn’t. This is massively grainy, to the extent that it left me wondering whether it was even shot on 8mm at all. Perhaps there is some gauge of film called 6mm or 4mm which had up to now escaped my notice... 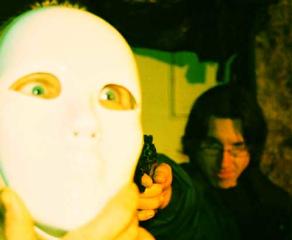 There’s also a fair amount of scratches and marks on the film which makes it look like the negative was left in the pocket of somebody’s jeans when they were put in the wash. Despite the 2006 copyright date, much of the film looks like it could have been shot 30 years ago.

So those are the visual problems. Then there’s the audio, which seems to be entirely post-synched. Writer/director/producer/editor John R Hand also gives himself a credit for ‘sound design’ and, to be fair, it does sound like somebody has designed it. As much thought has gone into the sound as the picture, except that there’s very little dialogue and what there is is often indistinct. Unaided by footage of grainy, not-quite-synched lips (when they’re illuminated at all), I sometimes found myself struggling to make out what actors were saying. I don’t know if it was a technical problem with the recording or just poor diction. Not that there is very much dialogue anyway, and what I could make out didn’t really elucidate me as to who these characters were, what they were doing or why.

And that’s problem three: the whole style and structure of the film is such that, even if one could see and hear what was going on, it still wouldn’t make any sense. Everything is obtuse and vague and there’s just nothing to try and get a handle on.

One of the few things that I could determine is that the central character, a floppy-haired young man played by Hand himself, is called Victor and is some sort of ‘physician’. According to the end credits his full name is Victor Karlstein (presumably a Hammer homage), making this one of the few Frankenstein films to not feature anyone called Frankenstein. Victor has a girlfriend called Victoria (Victoria Vermillion in the end credits) - played by Amy Olivastro - who lies in a hospital bed for most of the film with big black panda circles round her eyes. He also has a middle-aged boss named Andrew Milligan (Chester Delacruz: Cremains); could the name be an homage to the legendary New York schlock merchant?

Is there a monster? Sort of. Karl Borst is credited as ‘the monster’ on the website, although he is ‘the beast’ in the end credits, but we never get a decent look at him. There are occasional close-up shots of some sort of putrid, bubbly head which seems to have circuit boards inside it so I’m guessing that’s the monster/beast. Victor also seems to be growing a brain in a tank, for some reason.

Things pick up a little on the comprehension front in the second half when Victor receives a phone call from Victoria’s sister Tara (which both characters pronounce as ‘Terra’). He visits her hotel room but she’s asleep so he leaves her a note. She then visits his apartment where he drugs her, laughs maniacally for several minutes, then does something in the dark very quietly before driving her out into the countryside, where she smashes him in the face with a coke bottle. He chases her, they tussle, then Victor is somehow shot through the chest by someone unseen without him or us noticing. 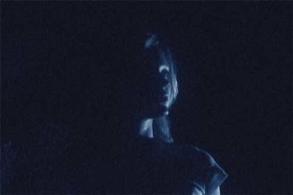 The odd thing is that, despite this complete incomprehensibility, it’s clear that a lot of work has gone into this. Frankensteins Bloody Nightmare isn’t just somebody with a camcorder filming their mates larking about. Every shot has been carefully composed, every sound has meaning - we just don’t know what. Since this hasn’t been just thrown together, it must all be deliberate. Question is: does John R Hand think that we can unravel the puzzle he has set us, or is he deliberately avoiding narrative cohesion for artistic reasons?

Okay, having written all this, let’s take a look at the website and read what it says ‘about the film’: “Brilliant young Victor Karlstein finds himself lost in an abyss of personal turmoil and professional stress after the woman he most likely seemed to love dies while under the care of his own mysterious medical facility. Determined to keep her alive, Victor uses his mechanically-enhanced reanimated corpse to murder young women in order to furnish ‘raw parts’ for her new body, among other devious things.”

Now here’s the funny part. This is sort of what I assumed might be going on, merely because it’s what you would expect in a film called Frankensteins Bloody Nightmare. But there is absolutely no way to tell, through the underlit, grainy image and the sparse, indistinct dialogue, that this is what is happening. There are one or two murders but we never see who commits them and we never see any surgery - at least, nothing that we can recognise as surgery. In fact, the murders are the weak points, standing out like inserts from another, gorier, less artistic film.

Oh, and I haven’t mentioned the soundtrack yet, have I? Apart from some protracted periods of silence, we have a nonstop barrage of what might kindly be called ‘atonal electronica’, sounding like Roxy Music-era Brian Eno tuning up his Moog. The music is credited to ‘The Greys’.

Remarkably, Frankensteins Bloody Nightmare actually played theatrically in New York for a week (rather incongruously situated inbetween some ‘improv comedy’ and the animated kidflick Barnyard, according to a photo of the marquee on the film’s website). It has also played a couple of festivals. I can only imagine how this comes across on the big screen, in Dolby 5.1 sound. It must be like staring at a TV screen from two centimetres away while someone tries to find the police waveband on a shortwave radio next to your ear. 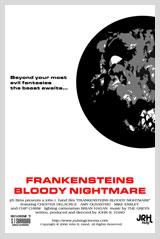 I always say that I judge films on how well they achieve what they set out to do with what they have available, but that’s very difficult to do when there’s no clue as to what the film is trying to achieve. As to what Hand had available, well that would seem to be an amateur (or at least, neophyte) cast and crew and a reported budget of two thousand bucks. To get any sort of feature-length anything (the film runs about 78 minutes) for that much is an impressive feat.

I’m not going to give this an MJS rating because, well, because I’m stumped.