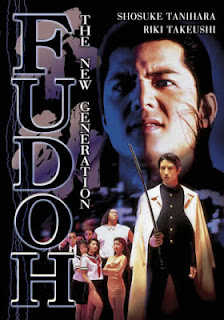 This is the fourth Takashi Miike film I’ve seen, following Audition, Happiness of the Katakuris and Full Metal Gokudo. The only thing these films seem to have in common is that they are all very different from anything else - and very different from each other too.

I thought Fudoh was just going to be an over-the-top yakuza thriller but really this is borderline fantasy territory. Shosuke Tanihara (Pyrokinesis, Godzilla X Megaguiras) stars as Riki Fudoh, the younger son of a gangster who, as a child, saw his father behead his older brother. Forced to grow up fast, he has established himself as a majorly cool crime lord while still in his teens.

This means he is still at high school while co-ordinating a network of operatives his age or younger, and he uses these kids to take out the old guard of gangsters. Innocent-looking little tykes of about seven or eight blast away with uzis at adults - I’m watching this from an advance disc and wondering whether the BBFC will pass this. Even more astounding are two girls who seem to be Riki’s closest allies. One of them works nights in a gentleman’s club where she demonstrates her special talent, firing darts from - well, let’s just say it puts one in mind of Wynona Ryder and ping pong balls...

Also into the mix comes man mountain Akira, played by wrestler Kenji Takano who must be the biggest guy in Japan! Even allowing for simple tricks like standing him next to short people, putting him on a box and filming from the waist up (the sort of stuff they do with Robbie Coltrane in the Harry Potter movies) it’s clear that this guy is huge! 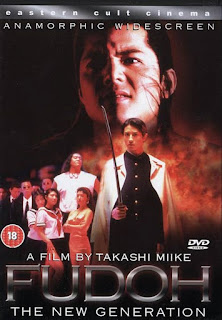 With its high school setting, the film becomes almost surreal: Riki Fudoh, who wears seriously smart suits, has the teachers in his pocket and the young ladies all wear those sailor suits (when they’re wearing anything at all) - very Sukeban Deka. Lots of people get killed in ways that will leave your jaw hanging open, and there is a sexual surprise later on that ramps the whole thing up a gear. Plus a character comes back from the dead as a sort of cyborg. Or something.

The low budget shows sometimes, mainly in the use of painfully obvious stock footage, and the plot gets rather convoluted, but the sheer audacity of this enormously entertaining cornucopia of sex’n’violence makes up for any shortcomings. This was far more enjoyable than I expected, and I’m left wondering - as I have been after each of my previous three Miike viewings - what else this guy can do.

review originally posted before November 2004
Posted by MJ Simpson at 22:48