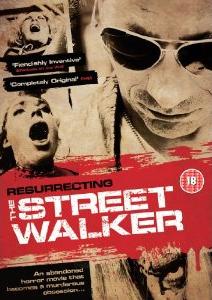 
Resurrecting ‘The Street Walker’ is a mockumentary. I worried for some time about writing that, unsure what the precise definition of a mockumentary is. The term dates back, I suspect, to This is Spinal Tap (which itself coined the term ‘rockumentary’) although the concept goes back at least as far as The Rutles.

But my concern was whether the term implied comedy: a mockumentary as a film which mocks the conventions of the documentary. There are plenty around: Just for the Record, Take Me to Your Leader, Hardcore and so on. But there are also fake documentaries which present themselves as real but are actually entirely scripted, and which are very definitely not comedies. Can these also be classed as mockumentaries?

While I vacillated over the issue, I read a review of a non-comedy film in Fangoria which used the term ‘mockumentary’ so I now think I’m safe.

Resurrecting ‘The Street Walker’ is a mockumentary.

It is important to differentiate the mockumentary subgenre from the found-footage subgenre which was so popular in recent years. Movies like The Zombie Diaries and Cloverfield were fake actuality pictures but part of the conceit was that this was raw footage, unedited and presented as found by some later soul, the last thoughts of those involved. 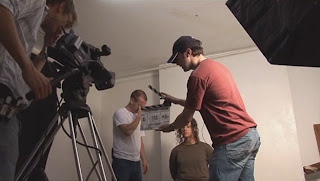 A mockumentary, by contrast, is presented as a properly edited film, albeit using fake actuality footage as its base. The lines blur of course. Vampire Diary is a found footage movie but the footage was allegedly shot for a documentary so the framing is generally professional even if the editing isn’t (as opposed to the grab-the-camera-and-run impression which most found footage films aim for). The Last Horror Movie in contrast is a ‘documentary’ designed to be ‘found’; professionally shot and edited together (albeit with some handheld shakey-cam) but never intended for broadcast or screening(!).

Resurrecting ‘The Street Walker’ is supposedly based on footage, shot by aspiring film-maker Marcus (Tom Shaw), of his mate, aspiring film-maker James (James Powell: Frank, Timestretched) who works as a runner for a small London film company. Intercut with these cinéma vérité stagings are after-the-fact, to-camera interviews with various participants in the story plus clips from The Street Walker, a ‘lost film’ which James finds and which comes to dominate his life.

From this brief synopsis we can see that structurally the film most closely resembles Pat Higgins’ The Devil’s Music, only with the film industry replacing the music business. But there are other interesting precedents. Andrew Parkinson’s groundbreaking I, Zombie: The Chronicles of Pain used documentary-style, to-camera monologues from secondary characters, describing their feelings of loss over the central character after his disappearance. So not a mockumentary per se, but using mockumentary tropes. Around the same time was Andrew Rumley’s amazing Strong Language, not a horror film (though Rumley has subsequently dabbled in the genre) but a feature-length montage of documentary-style talking heads which starts out as an exploration of mid-1990s youth culture and gradually, skilfully transmogrifies into a tense, urban thriller.

Then there’s the famous ‘Vampirology’ episode of Urban Gothic, starring Keith-Lee Castle and with a cameo by Ingrid Pitt. Plus half-hour ultra-obscurity Horror which you won’t find mentioned anywhere outside of this site. Probably a few others too. 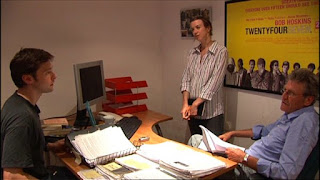 And so we come to Resurrecting ‘The Street Walker’ which has both an original premise and a commendable verisimilitude. I have commented before on how extraordinarily hard indie film-makers find it to realistically portray indie film-making. But I can say without hesitation that Portland Pictures is the most realistic portrayal of a British feature film production company that I have ever seen.

They’re based in a crappy little office somewhere just off Wardour Street. There’s one guy in charge who has been doing this for years and a handful of bitter, resentful employees crammed into a tiny, untidy space. The company spends its time developing projects that don’t get made, using funds obtained from the Lottery, the EU or rich punters looking for something to invest in. Once in a blue moon they can claim a ‘production’ as a very junior part of some multinational co-production deal. But most they just go to Cannes, Berlin and the AFM to make deals and scrape together investment for more films that will never, ever get made.

Given the job of clearing rubbish out of the company’s cellar, James finds some old film cans and discovers that what lies within is a never-completed 1985 violent horror film, The Street Walker. This is something that was shot by a mysterious figure named David Forshaw, now dead but very briefly visible in a reflection in the surviving footage. Portland boss Mike Lowrie (Hugh Armstrong: ‘The Man’ from Death Line! Holy cow!) bought the film with a view to completing it but the project went nowhere and for a quarter of a century it has languished, forgotten, in a Soho basement.

James becomes convinced that, with some deft editing and a few pick-ups (using lookalike actors and careful camera angles) he can turn The Street Walker into a finished picture. A completely forgotten video nasty, finally released 25 years later. He is allowed to undertake this work alongside his regular jobs, most of which seem to involve either photocopying or fetching coffee (yep, that's the UK cinema industry all right).

But gradually The Street Walker comes to dominate James’ life - and not in a good way. He starts to obsess abut the film, about the mysterious original director, about why the film was never finished. His obsession eventually teeters on the psychological/supernatural border where he could, potentially, be possessed by the film. Certainly it stokes the already tense atmosphere in the cramped offices of Portland Pictures where James faces his nemesis, Dorothy (Lorna Beckett, who was in a 2010 version of The Tell-Tale Heart with... Matthew Kelly?), an abrasive, intolerant, pregnant single mum who basically runs the company for Lowrie.

All of this is relayed to us by a skilfully written, adroitly edited mix of Marcus’ documentary footage, James’ secret video diary, interviews with various interested parties (but not James) and clips from The Street Walker itself. Using these four ‘sources’, first-time writer-director Ozgur Uyanik has created a powerful, tense, dramatic horror thriller. Even more than that, he completely suckers in the audience and we have to keep actively reminding ourselves that none of this is real. Not only are the video diary and interviews and office documentary footage all scripted, directed, acted scenes, but there never was a film called The Street Walker. Uyanik does not have four sources, he has only one - and that’s his own screenplay. 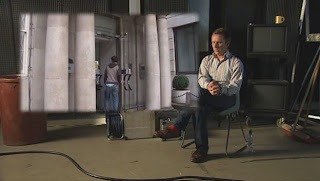 There is some discussion of whether The Street Walker might actually be a snuff movie, nudging the film towards the subgenre occupied by pictures like 8mm, Footsteps and, well, Snuff Movie. James makes it clear that snuff films are an urban myth but nevertheless he comes to believe that there was a death on set and this may explain both the film’s unfinished state and the director’s disappearance.

Just like The Devil’s Music and Strong Language, Resurrecting ‘The Street Walker’ presents the viewer with an enigma. It is a documentary about something with which the participant interviewees are very familiar and which the audience might be expected to at least be aware of. Any event sufficiently notorious to justify a feature-length documentary must also, ipso facto, be notorious. And rarely does anyone ever sit down to watch a documentary without knowing at least ‘what it’s about’. (Although real documentaries often start out by explaining what they’re about.)

Resurrecting ‘The Street Walker’ is a horror film of character and atmosphere. The scariest part is a claustrophobic sequence of a group of people trapped in the basement of a burning building. The only overt horror is right at the end in a denouement which we can see coming from slightly earlier on but which we are powerless to prevent. This is a film where the fear arises from knowing that something is going on but being unable to determine what, or how it might affect the characters on screen. We are forced to watch, eyes held open like Malcolm McDowell’s, as the grim drama unfolds on screen in three time streams: not just the documentary events captured by Marcus’ camera (and James’ video diary) but also the subsequent reflections of interviewees and the possibly prescient, fragmentary narrative of The Street Walker itself. 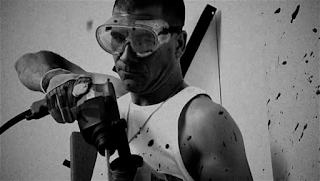 This is an imaginative, original, clever, gripping film and a fine debut by the Turkish-born, British-raised Uyanik who has spent 20 years working as script reader, sales agent and editor - presumably in exactly the sort of just-this-side-of-seedy company displayed in this movie - as well as directing numerous award-winning short films. Apparently he was responsible for international sales of Christmas Carol: The Movie although as he didn’t write or direct the thing we can’t really hold him responsible for that rather awful mess.

Actually, he has spent a large part of his career working for Nik Powell’s Scala Productions (which is why ‘James Parker’s’ MySpace page and YouTube channel have an interview with Powell, lending further verisimilitude to the character and the events shown in the film). He also worked on two feature-length production for the Children’s Film Unit, Doombeach and Survivors, both of which were broadcast on Channel 4.

My apologies for using the word ‘verisimilitude’ twice in one review but it’s a mockumentary - what do you expect me to do? Just be thankful that I’ve only used ‘cinéma vérité’ once. Well, twice now. Damn. 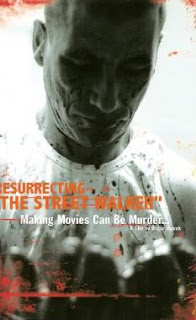 Inspired by Uyanik’s own experience on the lowest rung of the cinema industry ladder, the specific incident which sparked the idea for the film was apparently when he was clearing out a basement and found some film cans containing footage from Dark Blood, the movie that River Phoenix was working on when he died. Resurrecting ‘The Street Walker’ was shot under the title Celluloid Dream (or possibly A Celluloid Dream). Not only is the new title a very definite improvement, but there may have been some significant reworking of the idea as the logline I’ve seen says: ‘A killer is on the loose in a film company - or is it a dream?’ - which really doesn’t square with the film as released.

As a rare realistic look into the British film industry, and indeed as a psychological horror-thriller, Resurrecting ’The Street Walker’ works admirably and is thoroughly recommended.

MJS rating: A-
review originally posted before November 2004
Posted by MJ Simpson at 18:55