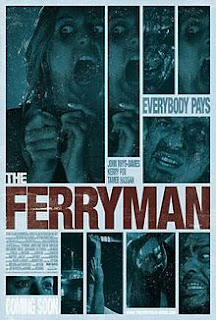 Put six characters in a confined situation - in this instance, a sea-going yacht - then introduce a stranger who brings a deadly threat and kill ‘em off one by one. It’s a tried and trusted formula but it’s smartly handled in this neat Anglo-NZ co-production which, though it’s not perfect, nevertheless passes a very enjoyable hour and a half of indie horror thrills.

Affable Cockney geezer (and Spurs fan) Big Dave (Tamer Hassan: Layer Cake, The Reverend) is the skipper and his sassy Kiwi girlfriend Suze (Kerry Fox: Shallow Grave, The Wisdom of Crocodiles) is the cook. Paying for passage/holiday on the six day voyage from New Zealand to Fiji are Maori Zane (Julian Arahanga: The Matrix, Once Were Warriors) and his ex-nurse girlfriend Kathy (Amber Sainsbury: Hex) plus nice guy Yank Chris (Craig Hall: King Kong, Perfect Creature) who is considering popping the question to his vain’n’vacuous other half Tate (Sally Stockwell: The Irrefutable Truth About Demons). The seventh member of the crew is Rolex, Big Dave’s ‘watchdog’.

All goes well at first, despite Tate’s unfamiliarity with life aboard ship, but when they pick up a morse code distress signal, they are required to detour into a mysterious bank of fog. Eventually they come across an abandoned fishing boat.

Now, we saw this boat in a prologue where John Rhys-Davies (I’m not even going to begin listing his genre credits...) was having a fight to the death with another guy which ended with Rhys-Davies, his eyes all supernaturally aglow, removing a ceremonial dagger from the side of his neck without apparent harm or bother. Crossing to the becalmed trawler, Zane and Chris find the ship deserted - apart from a thick-set Welsh actor lying half-dead under a tarpaulin. Rhys-Davies’ character is called ‘The Greek’ in the credits and that’s really the only clue we have as his accent is, well, rather odd. 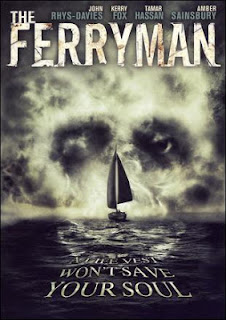 Now here’s the meat of the story. Rhys-Davies’ body is actually home to a being who can shift between bodies swapping souls (not a term that’s used in the film) in his quest for, well, we’ll come to that in a minute. This soul-swapping is achieved with the aid of the magic dagger - if he stabs somebody with it, he instantly becomes the victim and can then withdraw the blade without harm. He’s doing this to avoid a mystical entity - some sort of demon, I suppose - called ‘the Ferryman’ who has been chasing him through thousands of bodies over many, many years.

Dry and warm at last, the Greek swiftly discovers that the tubby, bearded fellow in whom he currently resides has fairly advanced cancer, necessitating his transferral into another body, then another - and so on. This makes The Ferryman a rather unique serial killer picture in that each victim in turn becomes the killer. Or rather, the killer adopts the guise of the victim. Unlike the similarly themed Body Jumper, a person’s soul is not restored to ownership of their body when the Greek leaves. Instead, it’s a succession of swaps so his first victim, Zane, finds himself in the portly body of the fisherman that the Greek jumped into in the prologue. This requires the talented cast to play anything up to three roles each, which must have been as challenging as it is entertaining. It is to the credit of both cast and director that this swapping of souls between people is never confusing or silly.

It also means that, not only does the killer become the victim, receiving all the attendant sympathy, but also the poor victim finds him- or herself in the body of the person who a moment ago was stabbing them and any witnesses immediately turn on the poor sod. It’s actually all very clever and adroitly handled in the script.

For some reason, physical scarrings transfer with the soul so the killer always has a snakelike tattoo on their back. This seems to be there for the slower members of the audience as it’s entirely possible to follow what’s going on and work out who’s who without it. This scar-transfer thing also gives Kate a clue that Zane is not what he was - although his suddenly increased appetite for rough sex is a big clue - as a large, well-healed burn on his shoulder disappears. Tossed overboard (in Rhys-Davies’ body), Zane makes it to the old fishing boat and sets out in pursuit of the yacht.

The psycho stuff is very well handled; however, what lets the film down somewhat is the thoroughly confused legend behind it all, which is sort of explained in a prologue by a little girl (who will become relevant later in a somewhat deus ex machina ghost scene, setting up the finale). Unfortunately it’s very difficult to understand what she is saying! But the basic gist is this: the Ferryman takes people down to a watery grave but only if they pay him his fare (“I’ll never pay you!” screams the bad guy at one point). The way for the dwindling number of survivors to defeat the bad guy, therefore, is to make him pay the Ferryman (a rather good rock version of the only decent song Chris de Burgh ever wrote plays over the end credits). But this doesn’t really make sense. To escape the deadly Ferryman, all one has to do is simply not pay him - so why would anyone even consider paying him? Viewers are also left wondering why the Greek is still being chased after so long while the Ferryman seems to have no interest at all in making anyone else on the yacht pay. And if this has been going on for centuries, as is implied, why doesn’t the Greek simply get off the sea and go live inland somewhere.

It’s an odd thing to say about a film called The Ferryman but that whole 'Ferryman' thing really isn’t necessary and leads to a not entirely satisfying ending (although there’s a great epilogue which makes up for that). The film would work just as well if the Greek was simply a psychotic bastard in possession of a magic dagger that allowed him to do the soul-swapping schtick.

Despite the above caveats, I really enjoyed The Ferryman. It’s gripping, exciting, scary, bloody, imaginative and very well made with a good cast playing nicely defined, sympathetic characters.

Nick Ward (Stickmen) wrote the script and shares story credit with producer Matthew Metcalfe (Nemesis Game). This is director Chris Graham’s second feature following the Kiwi romcom Sione’s Wedding. In addition to the main cast, Lawrence Makoare (who played three different roles in the Lord of the Rings trilogy) is the guy fighting the Greek in the prologue; Robbie Magasiva (Perfect Creature, Sione’s Wedding) is in the epilogue; and Ben Fransham (Heavenly Creatures) under a lot of make-up and CGI augmentation plays the eponymous Ferryman when he eventually turns up to claim his due at the end.

Cinematographer Aaron Morton (Nemesis Game, Sione’s Wedding) and art director Robert Bavin (Perfect Creature) do a great job and their work is complemented by that of editor Nigel Galt whose career in the cutting room extends back as far as uncredited assistance on 1970s classics such as Sinbad and the Eye of the Tiger and The Rocky Horror Picture Show! The soundtrack is by Haim Frank Ilfman whose other credits include Mario Azzopardi’s Savage Messiah. 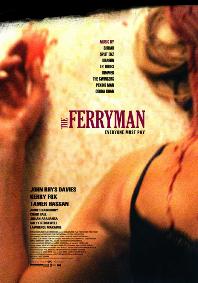 Make-up supervisor Roger Murray has amassed a range of prop-making credits on antipodean productions such as Bridge to Terabithia and The Chronicles of Narnia; special effects supervisor Jason Durey has a similar filmography while visual effects supervisor Julian Bryant, leading a surprisingly large VFX crew, was senior compositor on I, Robot. In fact, the New Zealand film- and TV-making industry being what it is, lost of cast and crew share credits. Many of them have worked on one of Peter Jackson’s blockbusters and almost everyone has worked on Hercules, Young Hercules and/or Xena.

The Ferryman is a corking film and well worth searching for.