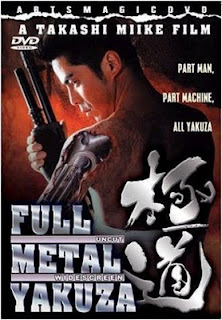 Takashi Miike is now very definitely the darling of Asian cinema fans in the west as more and more of his enormous and varied back catalogue receives an official release. After bringing us his 1996 film Fudoh: The New Generation, ArtsMagic move on to 1997’s Full Metal Gokudo. However, unlike Fudoh - or such recent, better known Miike flicks as Audition and Happiness of the Katakuris - this was one of the director’s DTV films. Consequently not only are production values relatively low, but also the script and direction are not as polished as in his later movies.

Geeky Ken Hagane has joined a yakuza family out of admiration for top gangster Tosa, whom he meets briefly before Tosa attacks a rival gang boss and then heads off to jail for seven years. During that time, Hagane attempts to rise through the ranks but we are shown that he is frankly rubbish at being a yakuza: attempts at extortion fail, his girl dumps him, and the final indignity is being beaten up by four teenage toughs.

When Tosa is released from prison, Hagane is one of the group there to greet him, but is the only person left with the boss in a trap set by rival yakuzas. Tosa and Hagane are both shot to pieces.

Hagane comes to in a strange lab, apparently still alive but with a body that makes whirring noises when he moves. He escapes (on a bicycle!) and bumps into the young toughs again, kicking their arses with his superhuman strength. Then it starts to rain and he short-circuits... 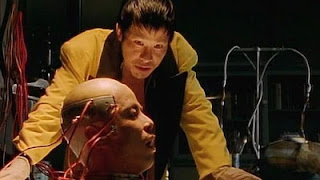 Yes, Hagane has been rebuilt as a cyborg - by pervy Hiraga Kenpaku (“self-proclaimed genius scientist but others call me the Nutty Doctor”) who wears a PVC catsuit under a yellow teddy-boy coat and speaks Russian. Kenpaku bought both Hagane’s and Tosa’s bodies - the former’s brain was still alive and the latter’s heart was still working - and combined them into one being. It has Hagane’s face but Tosa’s massive dragon tattoo on its back - and Tosa’s massive dick (obscured by digitisation).

The rest of the movie is Hagane/Tosa’s revenge on various yakuzas, though it’s very difficult to follow, since there appear to be several gangs with various mergers and alliances in progress. Plus of course everybody blames someone else for the hit on Tosa when they see Hagane’s invulnerability: he is bullet-proof with massive strength, super hearing and X-ray vision (one of his eyes is detachable).

Hagane ends up living in a ramshackle tent/hut on the beach near a small cemetery which contains the Tosa family tomb, where he meets Yukari, the young woman who was with Tosa on the night when he attacked his rivals. Yukari and Hagane fall in love - she says he reminds her of Tosa - but he cannot bring himself to be intimate with her. “I am a monster with a metal body,” he says, showing her Tosa’s tattoo.

Yukari then disappears and attempts her own revenge on the yakuza who killed her lover but is captured and tortured. Shown a photo of Yukari in bondage, Hagane is forced to work for the yakuzas but then fakes his own death when they blow up his hut, leaving his detachable eye as proof. This is carried into the warehouse where Yukari is held, and so Hagane sees her gang-raped and then committing suicide in a particularly unpleasant manner. 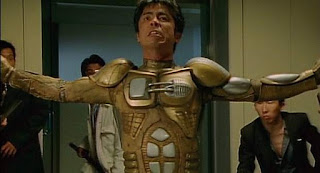 The film culminates in the expected violent revenge, but quite frankly nothing that happens in the last five minutes makes any sense whatsoever. The difference between this film and the stylish professionalism of Audition, made only two years later, is very obvious.

Most western reviews of Full Metal Gokudo say that it is a spoof of RoboCop which is both lazy and inaccurate. Yes, both films involve someone being converted into a cyborg without their consent and then using their new-found power to fight criminals - but that’s an entire subgenre of which RoboCop is merely the best-known and biggest-budgeted example. Cyborg Cop, ROTOR, Steel and Lace, even The Six Million Dollar Man - all have a similar premise, as do many other B-movies and TV series. Hagane is not a cop, either before or after surgery, and there is none of the introspection or futuristic satire which characterised the Verhoeven film.

One thing that sets Full Metal Gokudo aside from similar films is that the cyborg is created from two people, and Tosa’s heart affects its actions as much as Hagane’s head. It’s not quite an All of Me situation, but ‘Hagane’ has flashbacks to aspects of Tosa’s life, and it is ironically highlighted in Yukari’s tearful goodbye letter to him, explaining that she cannot love two men at once.

There are plenty of guns in this film, but also loads of samurai swords, which are always much, much more interesting to watch. Plenty of blood and occasional decapitations are well-done, but there are also some CGI effects which are so badly matted in that they look like they’ve been done on a laptop. 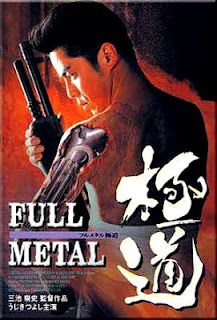 The widescreen transfer is as faultless as one expects from ArtsMagic, but reviewing this from an advance disc, I don’t know what extras they are planning to include. I’ve sent them bio/filmographies for Miike and the lead actors (not that I’m sure who plays who as the end titles aren’t translated on my disc). Principal players include Tsuyoshi Ujiki (Cure), Shoko Nakahara (Miike’s Visitor Q), Tomorowo/Tomo Taguchi (who starred in Tetsuo the Iron Man - which may also have influenced this film - and its sequel, as well as Android of Notre Dame, Tokyo Fist, Gamera 2 and 3, and DANGAN Runner) and the ubiquitous Ren Osugi (Sonatine, Hana-Bi, Brother, DANGAN Runner, Parasite Eve, Exte: Hair Extensions, Cure, Audition, Hypnosis, Uzumaki...).

Full Metal Gokudo (or Full Metal Yakuza, as it is called on this release) is an odd film, a mixture of violence, bonkers B-movie sci-fi and patches of unsubtle comedy (the actor playing Hagane tends to gurn when called on to play any extreme of emotion). Perhaps not the best movie to start your appreciation of Miike’s extraordinary oeuvre, but fans of Takashi Miike will need no encouragement to snap up this top quality release of one of his most interesting films.

MJS rating: B
review originally posted before November 2004
Posted by MJ Simpson at 23:00