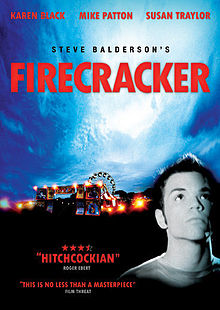 Steve Balderson’s first feature, Pep Squad, is one of my favourite movies, one of a handful of films that I could watch over and over, any time, any place, whatever mood I’m in. Firecracker, his long-awaited second feature, is one that I won’t watch so often, even though it’s an even better film. But that is merely because Firecracker is a dark, bleak, beautiful, painful tale of murder, hatred and repressed sexuality without any of the black humour of the first film.

Ostensibly based on true events that happened in Balderson’s hometown of Wamego, Kansas back in what appears to be the late 1950s or early 1960s, we are expected to believe that all legal records of the case were later expunged, suggesting that this is a 'true story' in the Cohen Brothers sense. But ultimately, that doesn’t matter, does it?

David White (Faith No More lead singer Mike Patton) is a garage owner in Wamego who has had to take on the responsibility of providing for his family since his father became ill (we’re never told what is wrong with White Sr but he spends most of the film sat silently in an armchair). David’s mother Eleanor (Karen Black: Trilogy of Terror, I Woke Up Early the Day I Died and a million others) has had a hard life and is starting to lose it; his younger brother Jimmy (newcomer Jak Kendall) is a sensitive, piano-playing young man, his nascent homosexuality thoroughly confused by occasional incestuous, abusive, gay encounters with David - who otherwise compensates by projecting a macho image.

Once a year, the carnival comes to Wamego, complete with sideshows. The carnival is owned by Frank (Patton again, with a small goatee), a thorough bastard who jealously guards his star chanteuse Sandra (Black again), a woman who dreams of returning to a normal life in Chicago but knows she can never go back. 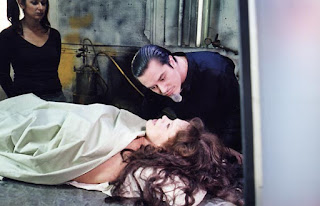 The White brothers are both attracted to Sandra. In David’s case, a sexual liaison one year ago led, he discovers, to pregnancy and abortion, and this makes him even more jealous and possessive. Jimmy sees the travelling carnival as an escape and dreams of joining up as accompanist for Sandra’s performances. When David, a drunken alcoholic, discovers his younger brother in Sandra’s trailer, he viciously rapes him and then disappears. Out of the trailer and out of Wamego.

Wamego is real small-town America, where everybody knows everybody else on first name terms, and so David’s disappearance leads the local sheriff ‘Ed’ (Bob Dylan’s daughter-in-law Susan Traylor: Lord of Illusions) to investigate. Where has he gone? Has he been murdered and if so, by whom?

But this is much, much more than a simple murder mystery. This is a slice of Americana, contrasting and comparing the apparent stability of the picket fence town with the apparent instability of the carnival life. Firecracker takes us behind the greasepaint and the lace curtains to show us the hatred and fear festering at the heart of families and communities which must always present a smile to the world. Perched somewhere between the eccentricity of the Cohen Brothers and the full-on weirdness of David Lynch, one can see a similarity to Pep Squad at least in the slight air of what one might term ‘genuine artificiality’: people pretending they’re something that they’re not, fooling the other characters, maybe even fooling themselves, but not fooling the camera or the audience. 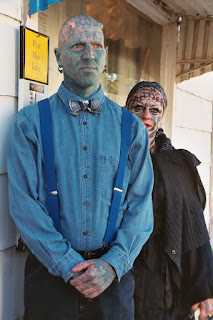 It would be easy to simply tell the story, but that’s not what Steve Balderson is interested in. He’s interested in the characters and he’s interested in the artistic possibilities of film-making, away from the commercial straightjacket of Hollywood. The most obvious example of this is the way that the town is filmed in monochrome while the carnival is not just colour but densely saturated colour (all credit to cinematographer Jonah Torreano who does an amazing job). The editing (by Balderson himself) and the music (by Justin R Durban and Lindsay Anne Klemm) both add enormously to the uneasy sense of distorted realism.

It is tempting to call Firecracker a masterpiece, but Steve Balderson has so far only made three and a half films: Phone Sex is his third; a feature-length documentary on the making of Firecracker is his two-and-a-halfth. Maybe, like Orson Welles, he’ll peak too early, living his life backwards and ending up doing lager commercials. Or maybe he’ll go on to create something even better than Firecracker. Even if it’s just as good, it will still be superb.

Two points I have not yet noted regarding Firecracker. In an obvious homage to Freaks, Balderson has populated his carnival with real sideshow oddities including The Enigma, who has small horns on his head and an overall body tattoo of blue jigsaw pieces, and his girlfriend Katzen, bewhiskered and only slightly less tattooed. Seven foot, three inch George the Giant was in Big Fish (as was ‘Lobster Girl’ Cathy Berry) and he acts alongside Selene Luna, who plays a three foot ten inch stripper. However I believe I’m right in saying that Pleasant Gehman, who plays a triple-breasted woman, only has the standard two in reality.

The second point - and if this doesn’t convince you that Firecracker is worth your time, then we have nothing in common, please go away - is that the manager of the Wamego coach stop is played by Jane Wiedlin. Jane Wiedlin, dude! This woman was the singing telegram in Clue, a Star Fleet Communications Officer in Star Trek IV (the one with the whales) and Joan of Arc in Bill and Ted’s Excellent Adventure. She has done voices for The New Batman Adventures, The Wild Thornberrys, King of the Hill and Scooby-Doo. And she was a freaking Go-Go! Words cannot express how unutterably cool Jane Wiedlin - and hence everything she touches - really is. 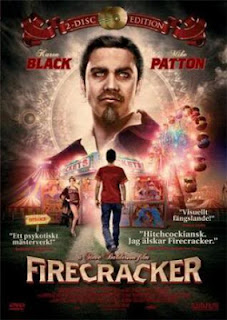 Other cast members include Amy Kelly (so memorable as Terra in Pep Squad) as Susie, a worker in David’s garage, and another Pep Squad alumnus, the director’s sister Brooke Balderson as a weird woman who lives outside Wamego in the desert, where she hangs bottles on trees. Paul ‘brother of Tom’ Sizemore does sterling work as Ed’s deputy, Harry, while Kathleen Wilhoite (a regular on ER and Gilmore Girls) is a nosy neighbour. The rather curious writing credit cites Steve B as writer and his father, producer Clark Balderson, as ‘translator’, with Pleasant Gehman and Laurie McKinnon as ‘literary editors’. The development and production of Firecracker is chronicled in the feature-length documentary Wamego: Making Movies Anywhere and the film's distribution is covered in the follow-up Wamego Strikes Back.

Firecracker is one of those films that leaves you sat there, long after the credits have finished, just thinking about it. It’s a staggeringly good film and the only reason I’m not giving it A+ is because I believe Steve Balderson’s fourth film could be even better.

Email ThisBlogThis!Share to TwitterShare to FacebookShare to Pinterest
Labels: 2004, USA