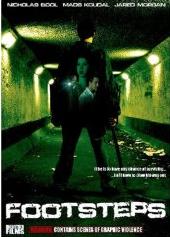 It’s not a promising premise: snuff movies, unemployment, death. But Footsteps turns out to be what we in the trade call “bloody brilliant.”

Nicholas Bool plays Andrew, a young man in some dreary British city whose life has gradually turned to shit. Both his parents are dead and he has been laid off from his dead-end job in a food-processing factory. Then one night, after picking a drunken fight in a bar, he finds himself becoming involved with two very untrustworthy and unsavoury characters. By then he is too low to care what happens as he is gradually drawn into an underworld of violence, murder and videotape.

Paul (Danish actor Mads Koudal: Awaken the Dead, The Feral Generation, No Right Turn) and his associate, credited only as ‘the cameraman’ (Jared Morgan: Sanitarium) have a variety of scams on the go, covering drugs, sex and violence – anything where they can make money from the country’s lowlife. They’re casual, calm, even friendly, but there’s a psycho inside each one. Paul in particular is shown to be completely amoral and while it may be a stereotype, the casting of a Scandinavian was an excellent choice. They both work for Larry (Steven Grey), a slightly overweight chap who keeps well out of the actual dealings. He is probably a legitimate businessman – his office has photos and a year-planner on the wall – who bankrolls this enterprise and profits from it without ever getting his hands dirty. 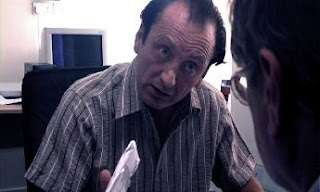 As a tale of a young man assisting a murderous psycho with a camera, Footsteps stands thematic comparison with The Last Horror Movie, but told from the underling’s point of view. However, whereas Max Parry used the camera to record murders that he was committing anyway, in Footsteps the videos are strictly a commercial operation, some of them involving incited violence against incapable strangers in dark alleys, others involving the systematic, sexual and ultimately fatal abuse of young women in an anonymous business unit.

Bereft of hope or purpose, Andrew stumbles blearily through his instructions, often little more than an extra pair of hands. But when he causes a problem for Paul, allowing a terrified drug addict (Solitaire Mounelme) to escape, he finds himself accessory to murder. That’s when something clicks and he achieves redemption – of a sort. A violent and bloody sequence of events ensues as it becomes clear that a man who has absolutely nothing left to live for or care about is actually very dangerous indeed. But this is no simple tale of zero-to-hero. A subtle but important point is made that Andrew makes no attempt to rescue any victim.

Footsteps treads a carefully plotted path, never becoming too bleak, but never becoming hopeful either. Andrew’s life is shit and, though he may survive, he will still be living a shit life. There’s none of the wry black humour that characterised The Last Horror Movie, and certainly none of the Hollywood bombast that filled 8mm, arguably the best known cinematic exploration of the (fictional) snuff trade. A very effective prologue is shown completely as camcorder POV but this is not used in the rest of the feature. 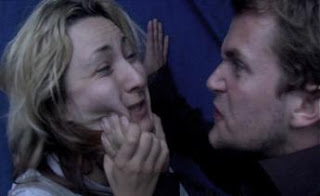 What impresses most here is the storytelling. In a taut 77 minutes, writer/director/editor Gareth Evans tells his story with astounding economy. In fact we’re nearly half an hour in before the first proper dialogue scene. This is expert film-making, for example in the way that the back-story of Andrew’s father (Richard Hand) is revealed through two very, very brief dialogue exchanges with his stepmother (Sarah Lloyd). I don’t think I have ever before seen a film which so perfectly encapsulates the cinematic motto of ‘show, don’t tell’. It is also exquisitely shot, which is ironic given the unpleasant nature of the story, settings and characters. But the cinematography here (it was shot on mini-DV using a Panasonic AGDVX100, for the techies among you) is as beautiful as the story is ugly. DOP Matt Flannery, assisted by lighting men Stewart Atwill and Tom Alcott, makes effective use of gels, especially in a shot/reverse-shot sequence in a nightclub. And there is one silhouette shot of a goldfish bowl – the goldfish becomes a skilfully used recurring motif – which just makes you want to pause the image and stare at it.

The acting is uniformly excellent and the special effects realistic (I think). The blood doesn’t gush in Tarantino-esque scarlet fountains but simply dribbles and runs, almost black, down white skin and onto grey pavements. This raises the question of whether Footsteps can be considered a horror film and I would say no, unless one has a very, very broad definition of the genre. Yes, it ticks the boxes marked ‘psychopath’, ‘snuff movie’, ‘torture’ and ‘multiple violent deaths’ but there is no enjoyment here, as there is with outré frightfilms like The Texas Chainsaw Massacre. This is the horror of real life, the underside of our cosy, suburban world that we don’t want to see. Paul and the cameraman could be the men next to you in the supermarket queue. The building where their team of assistants carries out their shocking ’work’ could be anywhere, on any trading estate. The story here is horrible and horrific, but not horror, not in that sense. Actually there is enjoyment here, but it is in the artistry, the exploration of character and situation, the deft storytelling and adroit camerawork. These can be enjoyed, marvelled at, but the film itself is a dark, dark drama. 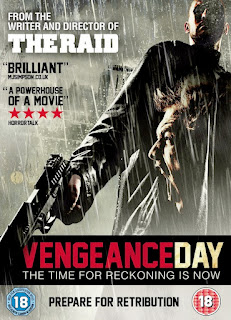 Evans is apparently an aficionado of Japanese cinema; he is a regular writer for jpreview.com and his award-winning student short (which I would love to see) was called Samurai Monogatari (Samurai tales). Without explicitly aping Japanese conventions, one can see the influence in the sparse use of dialogue and the editing that doesn’t waste a frame. A notable example is a jump to the following evening achieved by a half-second shot of Andrew clocking in (or out) at work then a shot of him on a bus. This screener disc actually includes optional Japanese subtitles, as well as a trailer (which I watched after the film, as I usually do, and which actually added to my understanding and appreciation of the story and the characters).

On its debut at the Swansea Film Festival in June 2006, Footsteps took home the prize for Best Film, and I’m not surprised. This is an extraordinary first feature from a remarkable talent. I’ll stick my neck out and say it’s the best British film of the year so far. If it doesn’t get a theatrical release then we might as well all pack up and go home now.

[Edit: After the international success of The Raid, Footsteps was given a belated UK release as Vengeance Day - MJS]
Posted by MJ Simpson at 21:40