Two hip but geeky students stumble across the body of a hulking, inarticulate scientific anomaly and somehow restore it to life. Trying to pass of their new ‘friend’ as a ‘surfer dude’ student at their college, they are amazed to find that his naivete makes him endearing and he becomes a star on campus. Can they maintain the illusion and if not, what will happen when people find out the truth?

Wait a minute, wasn’t that the plot of the moderately entertaining 1992 Brendan Fraser movie Encino Man/California Man? This TV movie is reminiscent of California Man (this is a UK site, so I use the UK title) and its entertainment value is even more moderate, especially without Fraser’s hunky bod. 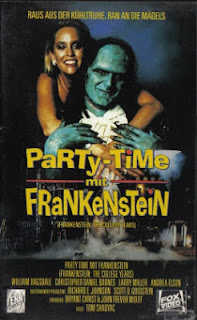 Meanwhile scheming, slimy Professor Arnold Loman (Larry Miller: Dean Richmond in the Nutty Professor movies, also in the Carnival of Souls remake and the voice of XR in Buzz Lightyear of Star Command) wants to find out what Lippzigger was working on so that he can claim it for himself and become the new Department Head. He is assisted by his unfunny comedy lab assistant Blaine (Patrick Richwood: Casper Meets Wendy, the truly odd Galgameth, and a bit part in the infamous Roger Corman Fantastic Four movie) whom he sets to spy on Chrisman.

When Frank goes walkabout in the Halls of Residence, no-one notices him except Token Black Guy Kingston ‘Kings’ Sebuka (De’voreaux White) who must be meant to be West African or something as he has a truly extraordinary French accent. With some ‘cool’ clothes and some foundation to hide his green skin, Frank passes for an exchange student (they register him on the college computer as ‘Frank N Stein’ - be still my aching sides).

Meanwhile Jay has fallen for glamour-puss Andi Richmond (Andrea Elson, who was the daughter in ALF) but his attempts to date her are constantly interrupted by problems with Frank. Things become even more complicated when Andi’s room-mate Gretchen (Margaret Langrick: Earth Star Voyager and the original movie of Harry and the Hendersons) falls for the tall, new student. And on top of all this, Frank is taken on as star kicker with the college football team. It all ends predictably enough with Professor Loman kidnapping Frank and making a presentation to the press which is effectively sabotaged by Mark, Jay and chums.

Frankenstein: The College Years is notable chiefly as the directorial debut of Tom Shadyac, who went on to helm Ace Ventura: Pet Detective, The Nutty Professor, Liar Liar, Patch Adams and Bruce Almighty. The humour here is basic and forced and while it’s not really bad there’s certainly no hint of a real comedy spark - so it’s exactly like all his later films.

This was the only ever produced script by Christ and/or Wolff but producer Engelman, who in a previous life was Second AD on films like Peewee’s Big Adventure and Footloose, had recently completed Leatherface: The Texas Chainsaw Massacre III and would go on to oversee Blade, The Mask, Scooby-Doo, Mystery Men and Revenge of the Nerds III. Special effects are credited to Tom Bellisimo (Tales from the Crypt) and Charlie Belardinelli (A Nightmare on Elm Street) who together worked on Jay and Silent Bob Strike Back, The House on Haunted Hill, What Lies Beneath etc. Marc Hershon (Monster Makers) did some rewrites on the script. 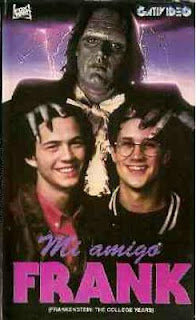 There’s not a hint of originality in Frankenstein: The College Years and very few laughs; given the proximity of the dates, it was presumably made as a quick cash-in on California Man. The funniest thing is actually a clip from WC Fields’ The Dentist; there is also a clip from something which may be Reptilicus but I’m not sure, and references (but not clever ones) to Star Trek, ET and Mission Impossible. The two charisma-free central characters are certainly no Bill and Ted or Wayne and Garth, and Hammond’s duties as Frank extend to little more than an impression of Peter Boyle in the immeasurably superior Young Frankenstein.