Even by my pitifully low standards, this is a rubbish film. But it does at least have an interesting ‘monster.’ Rather than a flying head, this is a flying heart.

We open on a snow-covered hillside where the bodies of young women are being buried by four black-clad men. Unseen by them, a human heart magically appears and flies at them as they walk back through the forest, somehow killing them and flinging their bodies high up into the branches. In the city, tyrannical warlord Liao Woo-hing (I’m guessing at these spellings!) and his wife Lam Chi return from somewhere, but Liao does not realise that his beautiful but treacherous young wife is actually having an affair with his major-domo who, for want of a name, we’ll call Sneaky Pete.

In the town square a girl is demonstrating magic tricks to the small crowd: she throws paper into the air and it becomes a flock of birds. An ugly bald guy who is Liao’s Chief Henchman is harassing an old market trader and his daughter, so the girl with the magic throws a bit of rope at him which turns into a snake, then back into a rope.

At the palace, Ugly Baldy tells Liao that he saw Zhu Zhu in the square, even though they buried her in the snow. He is sent with his under-henchmen to check for her body but it’s gone. Walking back through the forest, the bodies of the four guys from the prologue fall from the trees onto them. (Actually, let’s be clear here - because the film certainly isn’t! - what happens on screen is that four men apparently jump down from the trees then lie still when they hit the ground. It took me some time to realise that these were the men from the prologue and they were supposed to be falling.)

Elsewhere in the forest two people are on the run from Liao’s men. One is ‘Zhu Zhu’, the girl from the market square, the other is a young man who is described as “The Chen Kin-shi we’ve been watching lately.” In actual fact ‘Zhu Zhu’ is called either Pin Pin or Kun Kun - or possible both - while the fellow seems to be called Ten Chi.

It was at this point that I put my pen and notebook down and realised that this film doesn’t make a Damn Bit of Sense. So I sat back and enjoyed it. Well, I say ‘enjoyed’; I actually suffered through half of it and then watched the rest two days later when I had recovered sufficiently.

The disc is a budget-price release from InstantVision’s ‘Hong Kong Connection’ range, which otherwise consists of crappy chop-socky flicks like Assault of Final Rival, Deadly Strike, Five Fingers of Steel, Fury in Shaolin Temple, Golden Dragon Silver Snake and Invincible Obsessed Fighter. While Firefist of Incredible Dragon is also undoubtedly a crappy chop-socky flick, it also offers something else. And I quote:


“In a small town lives the notorious and wicked Liao. When one of his men informs him about a girl he’s seen in the street, a girl who looks remarkably similar to the girl Liao raped and murdered - he orders his men to check on the buried bodies. They discover the girls [sic] body is missing, and uncover a breathtaking mystery of Ghosts, Witches and Demons, all hellbent on destroying the vile Liao.”

Which all sounds very promising, doesn’t it?

So far as I can piece the (for want of a better word) plot together, Liao is kidnapping and imprisoning young girls whom he rapes and then kills, but is unaware that Sneaky Pete is actually screwing his wife. Kun Kun and Ten Chi are investigating these disappearances, including Kun Kun’s sister, who is her only surviving relative, as she explains to ... her uncle.

Meanwhile, there is this odd heart flying around the forest, scaring people and occasionally killing them by splatting blood all over their face (on another occasion it flies at someone and there is an explosion, and it also somehow slices someone’s hand off). Liao is having nightmares: one particularly promising scene has the bodies of the young women buried in the snow rising from their graves and flying through the air to surround him - alas it’s all a dream. 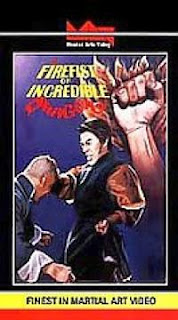 Liao decides that what he needs is a Taoist priest - to which Ugly Baldy replies, “Master, there are no Taoist priests around at this particular hour.” But UB finds one courtesy of a crappy comic relief whom we’ll call Goofball. There is also a white-clad female ghost in the forest who doesn’t actually do anything except stand around and look spooky, and there is an odd-looking tall young bloke with a dodgy silver wig and piss-poor make-up on half his face presumably designed to look like scar tissue. (In his final scene, as he lies dying and Kun Kun recognises him as Ming Hao - Ming who? - his wig falls off and the actress playing Kun Kun actually peels the make-up from his face.)

What else do we have? A couple of rapes, a bit of brief female nudity and Liao killing the unfaithful Lan Chi by stabbing her in the breast with one of her own hair-bobbins. There are also a few halfway decent fights, mostly involving Sneaky Pete or Ugly Baldy, whose weapon of choice is his head! At one point Goofball is killed by SP (his uncle the Taoist priest bemoans, “He’s dead! He’s been killed! Good heavens! How unfair! My student’s been beaten to death!”) but is revived by the intrusion of the flying heart, which turns him into a robotic super-fighter.

The film culminates with Ten Chi and Kun Kun releasing all the imprisoned girls - including Kun Kun’s sister, which surprised me because I assumed she was the ghost - before the two of them take on Liao. This fight travels through the palace, into the gardens, then all three protagonists leap in the air - and land in a field. From where they move to the forest, then ultimately the snow-driven mountainside, where Liao is somehow trapped in a cave by the ghost and Crappy Scar Make-up Man.

These are just the lowlights of a film which makes No Sense Whatsoever. At times it seems to be just a random selection of scenes, rather appropriate as the title reads like just a random selection of words. There is nothing even vaguely like a firefist in this and no dragons, not even anyone called The Dragon, incredible or not. It’s a great title - and is on the original print - but really does seem to have been created using a random phrase generator.

Some sources list this film as a 1980 production (at least one says 1978) but the on-screen title clearly says ‘copyright Filmark International Ltd MCMLXXXIII.’ The Inaccurate Movie Database gives the director as Wang Yung Ling which may or may not be Jimmy Tseng’s real name; I can’t find another credit for either of him. But then pretty much everyone in the credits looks like a pseudonym except for associate producer Tomas Tang, who went on to make crap like Death Code: Ninja. Firefist of Incredible Dragon is a work of genius by comparison. For the record, Li Yi Ting is credited with cinematography, Andy So with special effects, Ko Pui as action director, Benny Ho as dubbing supervisor, and Melissa Miller was responsible for the English version. 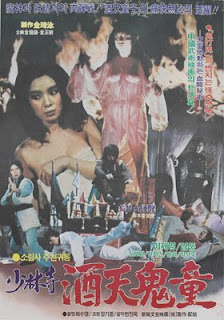 It should be no surprise that this deeply crappy film is presented in a deeply crappy manner: a scratchy print, almost certainly missing bits - which doesn’t exactly help one’s attempt to understand what’s going on - and with colour all over the place. The film is divided into eight untitled chapters which are quite brilliantly represented on the menu by eight random frame grabs not one of which is a recognisable image. On the other hand, this disc is available for only a fiver and even if the promised “breathtaking mystery of Ghosts, Witches and Demons” fails to appear it’s still the only flying heart film I’ve ever seen so I’ll up the grade a notch from rock bottom.

[Edit: When I wrote this I assumed that this was a Hong Kong film but this guy, who seems to know what he's talking about, reckons it's Korean! - MJS]
Posted by MJ Simpson at 21:20