I interviewed Larry Fessenden in July 2007 and used a very small part of this to accompany a review of The Last Winter in DeathRay magazine.

What I particularly liked about The Last Winter was that it was a mixture of scientific horror, supernatural horror and psychological horror all melded together. What was your aim in terms of what sort of horror you were going for?
"I think you’ve hit it on the head. Those are the components that interest me. I’m obviously interested in the science of global warming and the changes that are going on all over the planet, particularly in these Northern climates. I’m interested in the psychology of these characters who find themselves in an increasingly untenable situation. And I have a deep affection for the real monsters and the old mythology of old monster stories. So I find myself getting into this soup of different approaches to the genre and that’s what I ended up with.

“I would say my films ultimately are about the constant battle between reality and imagined reality. The characters are dealing with very real trauma to the climate, very real things are happening around them, but they’re also suffering from some sort of mental breakdown as they try to process what’s happening. All that intrigues me. I have approached classic horror tropes before and tried to update them into the modern vernacular."

I must admit that I haven’t yet seen any of your previous films.
"You’re not alone!"

How has your work developed from your earlier movies?
"In a way, I keep making similar films. This is almost a combination of my first three films. No Telling had a rather ecological angle to it; Habit is a very psychological story about one man’s perception of his cracking reality; and Wendigo is about a kid who needs to conjure up a creature to make sense of his misfortune when his father gets shot. So in a way, this is a combination. It’s taking a more dramatic environmental crisis and putting characters in this world and they’re slowly starting to deal with it. I just find these issues extremely interesting: contemporary, social issues and basically seeing the real horror that exists in different storylines. And that’s what interests me. Like Habit is about addiction basically and a guy who’s an alcoholic and he’s convinced this woman he’s with is a vampire but it’s obviously a projection. It’s interesting how the mind plays tricks to deal with a difficult and arbitrary reality."

You wrote your last couple of scripts by yourself but on this one you’ve collaborated with a guy from New York named Robert Leaver. What did he bring to the project?
"Robby is just a great spirit and it was just so fun to have somebody to bounce ideas off. I hired him so I was still able to maintain control over the whole thing and pursue my own twisted logic and imagery but it was greatly liberating to work with another writer. Robby had a great gung-ho spirit and really understood the character of Pollack. We had a lot of fun working out all the angles. So it was just really nice to have someone to develop the ideas along with.

“Also my producer made a lot of contributions, not least of which is he took me up to Alaska. A lot of the script that Robby and I had written was then supplemented with the real information. Just actually seeing these vistas changed the way we saw the story because we had written these beautiful Alaskan landscapes with pine trees and great mountains and what I found in reality was that the area we were thinking of depicting in the story was very, very flat. That brought a whole new level of horror to the story, this idea of a claustrophobia in open spaces. My producer is very technical minded and he loves the details of the oil technology and all those potentials so it was a wonderful level with Robby and also with Jeff Levy-Hinte." 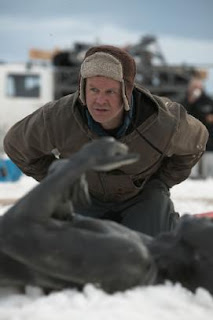 Why did you shoot it in Iceland?
"We looked, as I say, in Alaska and we were both taking in the scenery and also seeing if it was practical to shoot up there and it really became clear that there was not enough of a film community. And no film community would be welcome in the Northern clime where there really is the oil drilling and there’s a great deal of secrecy and just general antagonistic atmosphere to outsiders. They have a job to do and there’s issues of safety and then also they’re feeling that they don’t want prying liberals walking about.

“Then we went to Canada which was the logical place, also very flat, but I found that the snow would be unreliable and we just weren’t sure that we could get the landscape right. Then Jeff had some connections to Iceland and the producer Jony Sighvatsson. So we went there and we scouted and it was just a delightful array of locations and welcoming, experienced crews, so we set up the picture there."

I think that the Icelandic cinematographer makes a big contribution to the film.
"Working with Magni was absolutely spectacular. He’s a very young guy; I think he was 26 when we shot. But he was a native of Iceland and what I think was a wonderful move by myself and Jeff the producer was to embrace the idea of a completely Icelandic crew so they all knew each other and they were all very at home in this brutal weather. They knew the landscapes and they knew how to take a 35mm camera and a couple of lenses out on a skidoo and set up a shot, something that you just couldn’t get from an imported director of photography.

“Magni had a great sense of the light and a great love of the landscape so that just contributed tremendously. And we of course had a lot of films in common that we liked and that we referenced. We had a whole way of speaking in code about what we wanted to do. We called locked-off cameras ‘Gordos’ after Gordon Willis and handheld cameras were something else. We really had a great rapport and it was an excellent experience."

You’ve also got a terrific cast. What stands out is that there are no beautiful young people stuck in there for the kids to relate to.
"Well I must admit that I approach my films as stories about real people in real situations and, as you see, there was no real opportunity to have some young nubiles. That would be nice, I look forward to making that film of course. I’m going to make a movie about a high school next...

“But I was very interested in telling this story of the two main characters, played by Perlman and LeGros, just being guys who are working for a living, who have strong world views. Those world views clash and Abby, played by Connie Britton, is the woman who is somehow stuck inbetween. In a way, she is the everyman in the story. She is the one who is being told either that the world is going to collapse at any minute from global warming - the Al Gore sect if you will - and then there’s the other side of the coin which is: we must carry on with business and keep the economy strong, the gung-ho spirit that everything will work out if we just keep our nose to the grindstone. This kind of old-school, American spirit. Those two views are clashing and she’s in the middle, being torn between each point of view." 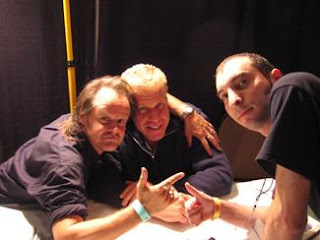 Was it difficult to create a fully rounded, sympathetic character for Pollack whose views are obviously opposed to your own?
"As I say, I feel like he represents this gung-ho American spirit which is something that even a raving liberal has to appreciate, the spirit with which this country was built and this kind of can-do attitude. It’s something that I had no trouble in embracing and having a deep affection for. What I wanted to convey is that he’s out-of-step with an encroaching reality and he’s unwilling to adjust. If I was making a commentary, that is what I’m trying to convey: that somebody can be wrong and still somewhat loveable and certainly compelling as a character. I wanted Ron Perlman in the role because I’d seen Hellboy and there is a grumpy character but there’s so much pathos and affection underneath the red skin that I knew Ron could bring that to this blowhard character that I was trying to depict."

Am I right in thinking that Douglas Buck shot a Making Of documentary on the film?
"Yes, Douglas is a great friend and we’ve helped each other and encouraged each other over the years with different projects. He wanted to come and make a portrait of my process. He’d already done a portrait of Abel Ferrara in the past. It was fun to have him over for four or five days to get some behind the scenes footage.

“Doug has remade Sisters by Brian DePalma and that has made a splash. I don’t know what will happen over in the UK with that. So he’s underway now. He’s hoping to make another feature this fall. So yes, the masterpiece will come but it just takes time sometimes when you’re working with the restrictions that come with these low-budget movies.”

How has the movie been received where it’s been shown?
"Well, all my films have strong reactions because of course they don’t fit neatly into the horror model. And now we have an increasingly extreme graphic violence which is what we associate with horror films. So those who come to see that are going to be sorely disappointed. On the other hand I think people who like horror for other reasons - for the metaphors, for the mood, for the potential titillation of a supernatural presence, all the things that horror actually has to offer - those people often are carried along with my style of filming. It’s always a love/hate thing and maybe that’s just as well. I always say if I’m objecting to my own culture in general, why would I expect it to embrace my work?" 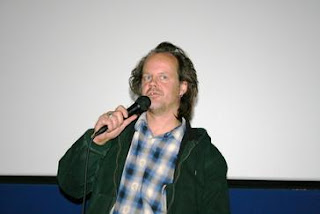 Finally, what have you got planned next?
"Well, I’m involved with projects at different levels in different roles and I enjoy that. I’m producing a number of low-budget genre fare and other types of films. For myself, I expect to make a very low-budget film in Mexico if I can get my head together on that. So I’m interested now, after this luxurious budget and the demands that come with that, the expectations. I had no restraints but there’s still an implied restraint that you have to listen to more voices when you have an enormous budget. This was a small budget by most accounts but enormous by my standards. So I look forward to doing something very small that’s really not going to damage anyone’s pocket book but where I can be even more creative. It’s just for me to be able to jump around different budget levels and continue to push the envelope of my own twisted vision.”