I believe - though I’m willing to be proved wrong - that Freak Out is groundbreaking in that it is the first film, certainly the first British film, to make its debut as a two-disc ‘special edition’ DVD package, without any sort of previous home release, or any theatrical release or TV screening or anything. After a few festival screenings, this is the first time that the film has been made generally available.

Freak Out was produced over a period of four years by people with no previous experience and as such it has a home-made ambience, with a cast that looks like it consists largely of the director’s mates and many of the locations apparently being the crew’s houses (or, more accurately, the crew’s parents’ houses). But it was shot on film (16mm by the look of it) and there are some ambitious sequences and on the whole the film can be considered a success, albeit an unusual one. A curious sort of chimera, Freak Out falls somewhere inbetween the strictly amateur grab-the-camcorder immediacy of Full Moon Massacre and the low-budget professionalism of The Last Horror Movie.

James Heathcote and co-writer Dan Palmer stars as Merv Doody and his best friend Onkey. Merv is a quiet, sensible sort, living in his gran’s attic in a room literally plastered with horror and sci-fi movie posters, who makes occasional visits to the video store where he suffers the unrequited attention of shop employee Abby (Nicola Connell). Onkey, on the other hand, is a jack-the-lad ne’er-do-well who works in a local bowling alley, letting in attractive girls for free. Their relationship can be summed up by Onkey’s birthday presents to Merv, which the latter accepts with good grace and genuine gratitude: bowling shoes, a skittle and something heavy and spherical which remains unwrapped. 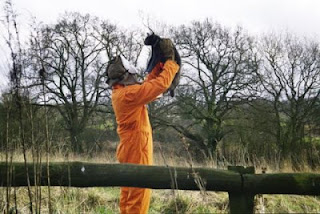 Into the duo’s life comes a serial killer, albeit a frankly rubbish one. In an overlong and not entirely necessary prologue we saw how the school spanner at a local educational establishment was mocked and tormented, then returned years later to wreak revenge - only to find that the school had long since been demolished. Merv and Onkey decide that they will train this serial killer - who prefers gentler pursuits to actually killing people - to be the real thing. They kit him out in an orange jumpsuit, a sack on his head and a hockey mask and then teach him how to use a chainsaw.

All goes well until the killer (or ‘Looney’ as he is referred to in the publicity material) goes completely loco during a party at Merv’s house. Much blood is shed until a climactic scene in a supermarket and a final denouement in the car park. Along the way, there are some genuinely funny gags, some obvious and weak gags, some predictably childish innuendo (notably lots of accusations that people are ‘bum-feelers’), a surprising but apparently deliberate homoerotic subtext, various murders committed with a ‘spatula’ (or ‘fish-slice’ as some of us call it), an inexplicable running joke about Larry Hagman, lots and lots of dialogue references to SF and horror movies, a scene at a lesbian bar called The Furry Cup (actually, that can probably be classified as more predictably childish innuendo) and some briefly seen and unexplained zombies - probably fulfilling some sort of EU regulation that says any horror comedy below a certain budget level must have zombies in it.

Comedy is very hard to do anyway, even harder to do at this budget level, and Freak Out is very much a comedy first, a horror movie second. As one might expect, it thinks it’s more hilarious than it is, but nevertheless it is actually funny. I enjoyed the film from start to finish (well, almost: see comments above and below) and laughed out loud in several places. There is funny dialogue and some terrific visual gags, but the acting is no great shakes, even from the two leads, and good acting is vital in film comedy. Overall, Freak Out comes across as a film with a lot of funny bits in it rather than a funny film.

The plot doesn’t make a huge amount of sense if examined closely, although that’s not a major problem as I don’t think close inspection is intended, but the film does feel slightly too long. It could afford to lose about a quarter of an hour from its 97 minute running time, mostly from the start as it takes much too long to really get to its central premise. There are also too many scenes after what seems to be the end, leaving one constantly wondering if the film is finally finishing, like a lengthy drum solo which may or may not lead into a reprise of the song.

One of the biggest problems is that none of the characters are particularly likeable. Onkey is meant to be a rogue and shows his vulnerable side later when there is a threat that he might actually end up in bed with a girl (Chilli Gold), but he’s not really rounded enough to earn our sympathy, while Merv is, to be honest, a bit of a drip and sometimes downright bland. One can’t help comparing this 'bloody buddy movie' to other slacker duos but Merv and Onkey are no Bill and Ted, no Wayne and Garth, no Jay and Silent Bob - they’re not even an Artie and Mason. (Although they have since turned up in a brief sequence in Evil Aliens, which also included some ‘UFO footage’ directed by Christian James.)

Co-producer Yazz Fetto not only provides the effeminate voice of the Looney (line producer Ian Chaplin is inside the jumpsuit for most scenes) but also appears as the local law enforcement, an American Sheriff. Desmond Cullum-Jones, a veteran actor who was in the 1980s BBC Day of the Triffids, a Pat Troughton Doctor Who story and episodes of Z Cars, Danger Man and Suspense, has a small role. He was a non-speaking private in the Walmington-on-Sea Home Guard and passed away in 2002. John Fallon, who runs the Arrow in the Head horror movie website and has had small roles in Saw II and Uwe Boll’s Alone in the Dark, provides the voice of a ‘Looney doll’ which Merv and Onkey consider marketing, while American ska band Less Than Jake appear briefly as themselves (but don’t perform). Jane Scarlett (Flesh for the Beast, Blood Junkies) plays a scream queen, Richard Scott (A Home for the Bullets) appears as a ‘spatula victim’ and there is also a cameo by Peter Stanley-Ward, writer/director of another recent (but as yet unreleased) British horror comedy, Small Town Folk, the cast of which includes Palmer, Heathcote and Warwick Davis. 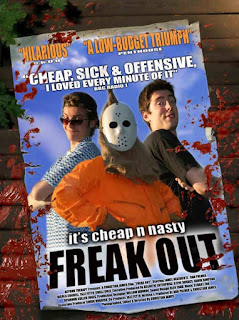 The curious thing here is that I think Anchor Bay’s decision to release Freak Out with a ton of extras actually works. A terrific fifty-minute Making Of, consisting of behind-the-scenes footage with the occasional caption, really adds to one’s enjoyment of the film, especially the footage of dolly shots achieved by sitting the cameraman in a wheelchair or shopping trolley. There are also two commentaries - one with James, Palmer and Netto; one with James, Palmer, Heathcote, Connell and Gold - plus a load of deleted scenes, some extra sketches, a music video, easter eggs etc. It would take a week to get through this lot.

I really wish I could be as enthusiastic about Freak Out as some other reviewers. For a debut film that has pulled itself into existence by its boot laces, this is a tremendous achievement - and it is undeniably funny. I just feel that it doesn’t quite live up to its own high expectations. Nevertheless, for fans of sophisticated childishness this is an essential purpose and I certainly would like to see more from these film-makers because they have the potential (and clearly, the determination) to make something truly amazing next time.